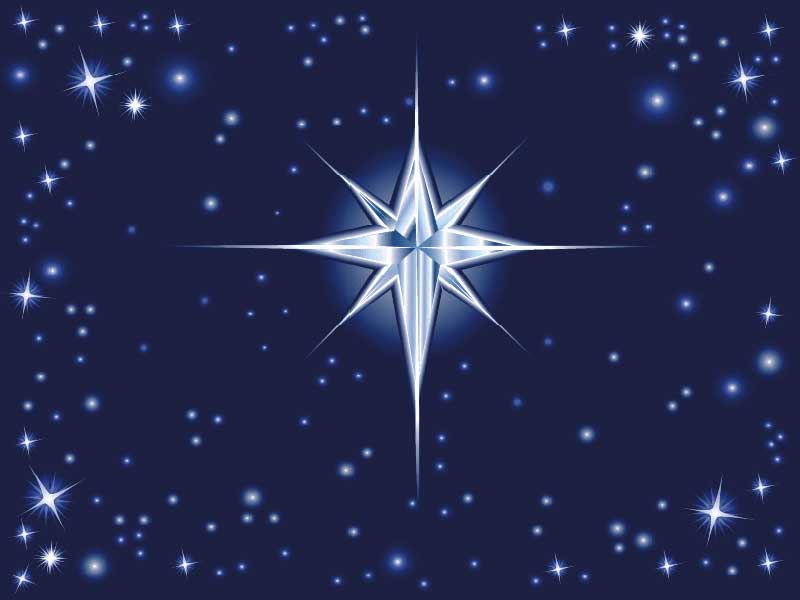 A brilliant “star” is in the sky now and will highlight the Christmas Season this year. What is it? Go outside and look for it.

Recently I stood gazing into the star-studded heavens. No animal or bird broke the silence. Even the wind was still. Remaining fall leaves hung motionless in the mild night air. A spectacular stellar display gleamed and glittered in a velvet-black sky. Orion the Hunter, Taurus the Bull, the Gemini Twins, and the Pleiades star cluster sparkled in the heavens as they do every year at this season.

Then I noticed a bright golden “star” shining in the constellation Taurus. But it was not a star at all, it was Jupiter, one of those heavenly bodies the ancients called “planets,” a word meaning “wanderers,” because their position in the sky varied throughout the year. How interesting that a new celestial light should appear in the heavens during this Christmas season. I wondered how those shepherds of old must have felt to suddenly see a brilliant new “star” in their firmament.

Jupiter does not appear in the sky every Christmas. But, this year, it is particularly notable and lends a rare touch throughout the season. By 7:30 on Christmas night it will be less than a degree above the almost full moon. About 4 degrees below and to the right of the moon you’ll be able to see Aldebaran, the fiery orange eye of the bull in Taurus. Jupiter, the moon, and Aldebaran will be in perfect alignment, presenting an awe-inspiring spectacle.

The Christmas season today incorporates a complex blend of natural, sometimes pagan, traditions. Shiny green holly with its bright red berries, was harvested by ancient Druids and used to announce the new year. It was also a part of the Roman Saturnalia Festival, celebrated in December. Many Roman traditions from this festival have become a part of modern Christmas, including kissing under the mistletoe.

Jupiter is the largest planet in our solar system and rules the sky this Christmas. The ancient Romans revered him as king and ruler of all the gods.

Many years ago, it is said that Martin Luther, the founder of Protestantism, saw the stars glimmering through the branches of evergreens at Christmas and was deeply moved. In an effort to bring that experience home, he cut an evergreen for his family and used small candles to simulate stars, just as we put lights on modern-day Christmas trees.

There are those who say the animals, both domestic and wild, pause in reverence for a moment at midnight on Christmas Eve. I’ve never witnessed this hushed and reverent tribute, but the child in me would like to believe it happens. In my heart it does, and at this season I choose to stop being a scientist and allow the sparkling night sky overhead, Christmas trees, and even the presents under the tree, to remind me of the birth of Jesus Christ, the Savior of the world.

My holiday blend of nature’s wonders is in full effect. The yaupon and native holly are laden with bright red berries. Winter birds are returning, and whispering through the woods, my heart and mind hear the muted sound of sleigh bells, the gentle strains of “Silent Night, Holy Night,” cattle lowing in the subdued light of a stable in Bethlehem, and the murmur of a tiny Child’s first sounds.

Technicalities aside, winter, Kris Kringle, Father Christmas, Santa Claus, the birth of the Savior, gifts symbolizing those given to Christ by the Wise Men, and nature blend for me into a mix that is delightful and spiritually uplifting.

I choose to forgo a detailed, almost depressing examination of the origins of each Christmas tradition. Rather, I’ll stand under the star sprinkled sky this year and simply feel tranquility wash over me as I remember an angel’s promise to us of “peace on earth; good will toward men.”

It’s Christmastime. Let its peace flow into your heart. Go outside, far away from the hustle, bustle, and superficiality of the season. Gaze at Jupiter, the new Christmas “star.” Don’t talk; be silent and just feel the spirit of Christmas. Perhaps it will touch you in a new and lasting way. Hopefully, we can carry Christmas in our hearts and display it in our actions all the year through.

I wish you a merry, fruitful, and thoughtful Christmas. May the angel’s promise of peace and good will become a living reality throughout the world.