Let your imagination and child-like fancy take charge this season. Cleanse yourself of Scrooge and the Grinch and become an awe-stuck Cindy Lou Who, if only for a short holiday respite from the stress, strain, and daily drudgery. Become a child again, if only for a short time. Enjoy these “Twelve Days of Christmas.”

Photo by Paul H. Risk
Our traditional Christmas décor mirrors much from historical traditions and the fields and forests: the fir tree, sparkling lights representing stars, and the Yule log burning on the hearth.

Christmas trees have long been a Yuletide tradition. Their aromatic needles and boughs of evergreens lend a magical fragrance to our homes.

Evergreens have been used as a part of winter festivals for thousands of years – perhaps as far back as 1440 in Latvia. Pagans used branches of it to decorate their homes during the winter solstice. Romans decorated their temples during the festival of Saturnalia. Christians saw evergreens as representing eternal life with God.

The 16th century German preacher Martin Luther may have been the first person to bring a Christmas tree into his home. It is told that just before Christmas he was in the forest, perhaps gathering his thoughts and enjoying its tranquility and beauty. He was suddenly overawed as he saw brilliant stars filling the sky sparkling through the branches of the evergreens. (There was no light pollution in those days.)

In an effort to duplicate that sight he brought a tree into his house and decorated its boughs with small lighted candles, simulating the stars he had seen. (I know, I know, it was a fire hazard! Just relax, Grumpy, and let the child in you glow like the candles.) 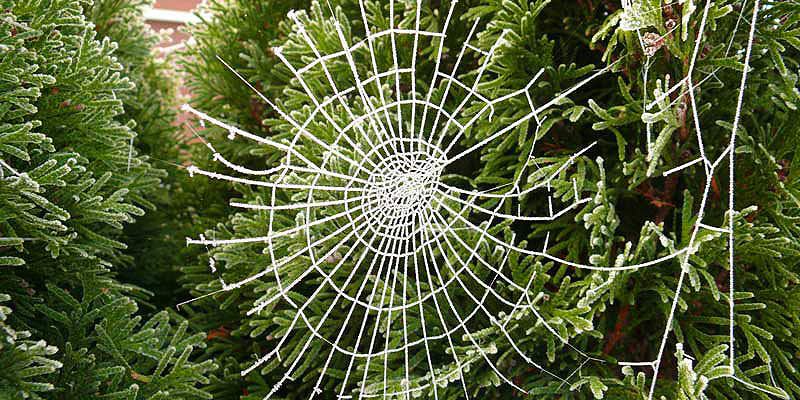 One of my favorite stories or yore is how spiders joined in the celebration. Housewives tended then, as now, to think of them as creepy critters dwelling in dirty corners. The spiders were saddened by this attitude and dearly wanted to see the Christmas tree and the other wonderful decorations.

So one night when everyone was asleep, out they came, awed and impressed by the beautiful Christmas tree. They crawled all over it marveling at its beauty. Of course they also left webs wherever they climbed. Many spiders do that, trailing web lifelines behind them as they explore, a bit like climbers with belay lines and safety anchors to catch them if they fall.

When morning came the spiders quickly scurried back to hide. It was certain that the gray cobwebs all over the Christmas tree would not be appreciated. But then, the magic happened. The webs suddenly changed into trailing silver and gold threads and streamers. Some say it was St. Nicholas or Santa Claus or Father Christmas or the Christ Child that made it happen. In any case, we can credit the spiders’ example with the sparkly tinsel that we use today.

In Germany, Poland, and Ukraine finding a spider or its web on your Christmas tree is considered a good omen. Spider decorations called pavuchky, or little spiders, are even now placed on their trees. 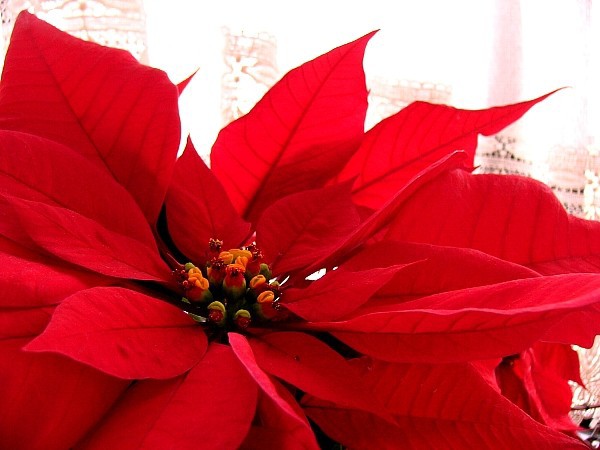 In Mexico, the story goes that there was once a poor girl named Pepita who had no present to give the baby Jesus at the Christmas Eve services. She made a small bouquet of roadside weeds, the only thing she could give.

Timidly placing the weeds on the altar they suddenly burst into bright red flowers. A miracle had occurred. They became Poinsettias, and are to this day known as the Flores de Noche Buena, “Flowers of the Holy Night.”

But whether it be Poinsettias, fir trees, or golden-webbed spiders, let this Christmas season cause you to pause and take measure of the things in life that are really important. Cast off superfluous, unimportant worries, at least for a few days during this “Twelve Days of Christmas,” and allow yourself to be young again – become rejuvenated by the field and forest plants that are so much a part of this traditional time of the year.

And remember, this is the sacred time we commemorate the Birth of the Son of God, even our Savior, Jesus Christ. His gift to us is immeasurable and priceless. Merry Christmas to all.