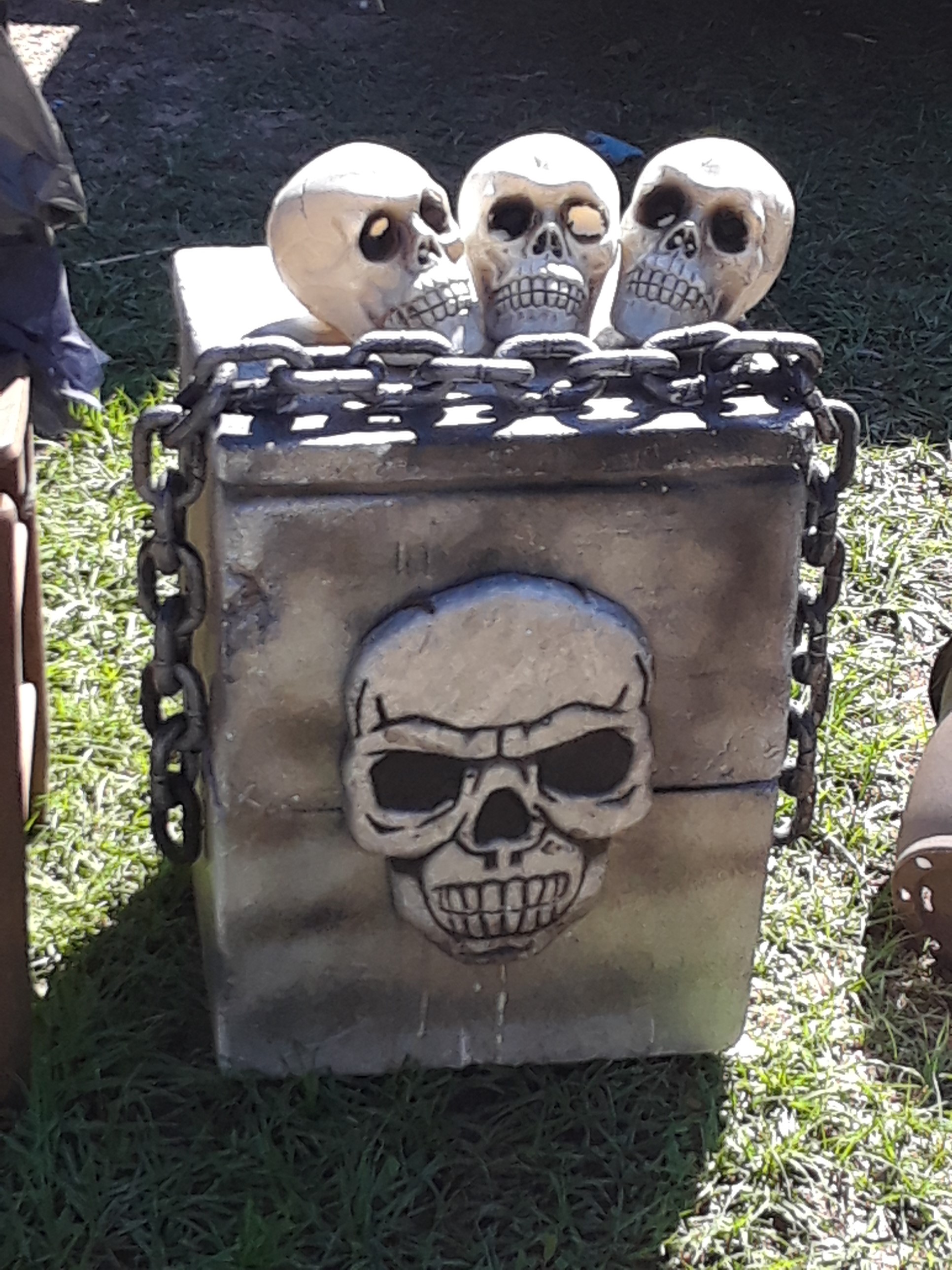 Photo by Paul H. Risk
These scary skulls are part of an elaborate lawn display that mysteriously appears annually on our road, with spooky tomb stones and skeletons emerging from the ground while ghosts and goblins drift through the trees.

Originally a religious observance dating back into antiquity, today it is a mix of fun, fact, fiction, awe, mystery and the macabre. Many of its traditions are tied to our fields and forests.

Our country road, incidentally, is known by the locals as Hatchet Man Road; a perfect fit for Halloween. Legend has it that years ago either a man killed his wife with a hatchet somewhere out here or a ghastly scarred man with a hatchet terrified some girls in a stuck car. Take your choice.

Linus, one of Charlie Brown’s “Peanuts” cohorts will be sitting in his pumpkin patch with a skeptical Sally waiting impatiently for the Great Pumpkin to appear.

Carved pumpkins called Jack-O-Lanterns have been around for many years. Hollowed out with a face carved in them and a candle glowing inside have been a part of my Halloweens for many years and are still scary.

Candle-lit vegetables date back to ancient Ireland when eviscerated turnips with frightening carved faces were part of the holiday.

Formerly known as All Hallows Eve, Halloween was originally a day to honor saints. But another belief is that on Halloween, the spirits of the dead return from the ground to possess the bodies of the living. For protection, people dressed in strange, frightening costumes to discourage the evil spirits.

Field and forest creatures such as bats, especially vampire bats, owls with huge glaring yellow eyes, slinking black cats, scuttling spiders and other creepy critters, along with a few ghosts and goblins are important parts of the Halloween mix. Fearsome stories about roaming spirits of the dead along with witches add real chills to the night.

Personally, I like a little shiver down my spine at Halloween and apparently so did James Whitcomb Riley, who in 1885 wrote “Little Orphant Annie,” a classic scary Halloween poem about bratty kids. Although I wrote about his poem several years ago, it’s time to do it again. Get a grip on yourself as you read on.

An’ one time a little girl ‘ud allus laugh an’ grin,
An’ make fun of ever’ one, an’ all her blood-an’-kin;
An’ wunst, when they was “company,” an’ ole folks wuz there,
She mocked ‘em an’ shocked ‘em, an’ said she didn’t care!
An’ thist as she kicked her heels, an’ turn’t to run an’ hide,
They wuz two great big Black Things a-standin’ by her side,
An’ they snatched her through the ceilin’ ‘fore she knowed what she’s about!
An’ the Gobble-uns ‘ll git you

He then followed up with a warning about skipping your prayers:

Wunst they wuz a little boy wouldn’t say his prayers, ––
An’ when he went to bed at night, away up-stairs,
His Mammy heerd him holler, an’ his Daddy heerd him bawl,
An’ when they turn’t the kivvers down, he wuzn’t there at all!
An’ they seeked him in the rafter-room, an’ cubby-hole, an’ press,
An’ seeked him up the chimbly-flue, an’ ever’-wheres, I guess;
But all they ever found wuz thist his pants an’ roundabout: ––
An’ the Gobble-uns ‘ll git you

This year Halloween will be dark, dark, dark and rainy. Just right for ghosts and ghouls. The half moon won’t rise until just after midnight. But look up. By 11 p.m. if the skies clear the constellation Orion – The Great Hunter and its bright star Betelgeuse will sparkle in east. The Pleiades star cluster will be just above Aldebaran the brightest star in Taurus the Bull. In the WSW bright red Mars reigns. If it remains cloudy on Halloween here in East Texas you may have to look at the skies the night before or the night after. They’ll be about the same.

So don’t get scared – too much. Enjoy the night in the fields and forests, but say your prayers. It’s all make believe. Probably…Maybe…I think. (Heh! Heh!)