For about two weeks, folks throughout East Texas have been plagued by aphids; not the common run-of-the-mill, small green types, but big, black, winged ones up to half an inch long, commonly known as giant bark aphids. Along with the aphids has come their little New Year’s present to us of sticky droplets all over cars and lawn furniture underneath the aphids’ feeding sites. On warm days they cluster in sunny spots as they warm up and look for places to have a meal. 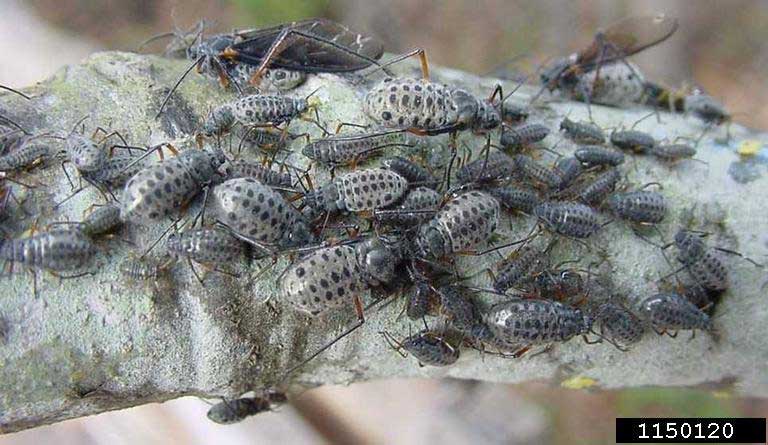 Photo by Herbert A. “Joe” Pase III, www.forestryimages.org
Bark aphids can grown up to 1/2 inch in length, and can make a real mess on cars parked under branches they are massed on.

With a name like theirs, I’m surprised an enterprising moviemaker didn’t produce a 1960s horror movie featuring them. Can’t you see the title? Huge dripping red letters would announce “The Attack of the Giant Aphids!, starring Lon Cary,” the stage name of an emerging Italian actor really named Longistigma caryae (the scientific name of this insect pest). Portrayed as six-foot long monsters, they would crawl, hop, and wing their ways into our communities, attacking people and leaving behind only the shriveled husks of their victims, sucked dry by the invaders.

Gratefully, our invaders are only giants when compared to more ordinary aphids. Related to leafhoppers and cicadas, they have piercing, sucking mouthparts and feed only on plant juices, not animals. They jab their beaks like tiny hypodermic needles, into the plant tissue that carries sugary sap. As they insert their tiny “needle” they secrete a substance forming a sheath around the entry wound. A chemical in their saliva keeps the sap liquid to prevent clogging their personal plumbing.

Although plant sap is very high in sugar content, it doesn’t supply much in the way of amino acids or nitrogen. As a result, aphids have to drink a tremendous quantity of sap to get enough of these chemicals. The excess sugar and water, called honeydew, passes through their digestive tract and is excreted continuously as a very fine, virtually invisible “rain.” Yep, that sticky stuff on your car is, to put it delicately, aphid excretion! After it dries, you’ve likely noticed that it’s very hard to get off, and if left for long periods of time it will damage painted surfaces.

Besides making a sticky mess, the honeydew can form a shiny glaze on the leaves of plants below aphid feeding sites that turns black as a fungus called sooty mold grows in it. Although sooty mold isn’t very harmful to plants, it is unsightly and slows photosynthesis by reducing the amount of sunlight reaching the interior of moldy leaves. You can wash off the honeydew and mold with a nozzle attached to your garden hose.

Giant bark aphids feed on a wide variety of plants including basswood, hickory, oak, pecan, sycamore, and walnut, generally attacking twigs because the bark is thinner there. When they occur in large numbers during the production of new plant growth, distortion of the emerging leaves, buds, and flowers can occur. Although giant bark aphids don’t carry pathogens, other species transmit a wide variety of plant diseases.

Most aphids overwinter as fertilized eggs attached to plant stems and branches. Their life cycle is complex, rapid, and they become sexually mature a mere five or six days after hatching. Since an adult may produce up to 85 young during their lifetime, huge numbers of aphids can develop in a very short time. Newly hatched nymphs grow rapidly, ultimately becoming winged adults. All stages and sizes of the developing insects are commonly seen clustering together on plants. The large, winged adults are most noticeable and look a little bit like flying ants, although they aren’t related. 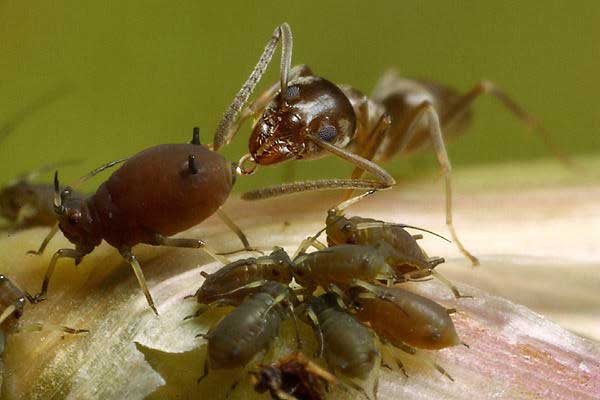 Photo from digitaljournal.com
Some ants will actually “herd” aphids in order to “milk” them of the sweet honeydew they release.

Interestingly, some ants keep other kinds of aphids as food sources. The ants gather aphids and their eggs and keep them through the winter in their nests. When spring comes, they move them to food plants, protect them from enemies, and eat the honeydew produced. These “cow” aphids release honeydew on command when an ant “tickles” them, milking them for food. Aphid “herds” are carefully tended by guard ants to protect them from predators and move them to better feeding locations as their production of honeydew falls off.

Spraying with horticultural oils or soaps and a wide variety of pesticides will kill aphids and their eggs. However, the giant bark aphids will likely be a problem only for a short time so it’s doubtful that active control is worth the trouble and cost. The frosts we’ve had the last few days may have killed a significant number of them already. In the meantime, try to park away from host trees, or wash your vehicles frequently while these insects are actively feeding.