Armadillos, those little armor-plated but stupid critters are back. These little armored relatives of sloths and anteaters take great pleasure in rooting around my lawn looking for grubs and other tasty snacks. In the process, the near-sighted diggers make a real mess of their foraging areas. Personally, I firmly believe the crusty little critters have launched a vendetta against me. Why this is I don’t know. What’ve I ever done to them? With the exception of shooting them on sight I mean.

Mostly active at night, they creep out of the woods at the edge of the lawn and commence to root with their pointy noses and dig enthusiastically with their well-developed claws. Normally, they’re pretty slow-moving, but when startled (or when first penetrated by a bullet) they run like the wind. 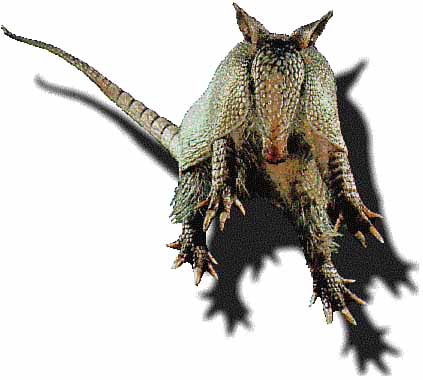 An armadillo performing its famous but often fatal high-jump.

Armadillos can’t see very well, so their food gathering consists mostly of smelling and tasting. What could be simpler? Stick your nose in the hole you dig, touch any potential tidbits with your tongue, then much it up with the few teeth you possess. Armadillo dentures consist of only a few stubby, bony molars, and their teeth aren’t covered by enamel the way yours and mine are.

Newcomers to Texas frequently comment that the only place they see armadillos is along roads and highways, deader than a doornail (yes Virginia, doornails are truly dead) and often being dined upon by vultures. You’d think they’d evolve into a more road-wary strain since they don’t do roads at all well. Their automobile avoidance behavior is simple – and stupid. Confronted by an onrushing car, they jump straight up in the air. Real smart! Didn’t their mama never teach them nuthin’? Or did the parental advice go like this? “Don’t run off the road son, just jump up in the air.” Smack!

Native to both North and South America, armadillos come in about 20 different varieties, and are often hunted for food. Some say armadillo meat tastes like duck.

There are some 20 kinds of armadillos in North and South America, varying in size from the fairy armadillo weighing in at a mere 4 ounces, to the giant armadillo, the bane of South American farmers that can weigh up to 130 pounds!

The nine-banded armadillo is the only variety found in the United States. It is the official Texas mammal and is usually about the size of a cat, weighing 8-17 pounds. Their head, neck, back, tail, and legs are protected by a tough material similar to our fingernails, arranged in plates called scutes. However, these plates aren't all that hard and even a medium-sized dog can bite through them. In spite of wide-spread belief, Texas armadillos can’t roll up in a ball. They just hunker down, run for shelter, or rapidly dig a hole for protection.

The nine-banded armadillo was used for years as an experimental animal in leprosy research. Their low body temperature and weak immune system made them one of the few animals suitable for this research. Perhaps as a result of lab escapes, some wild armadillos now carry leprosy and people have actually contracted the disease from them. Such transmission is rare, however. Most victims have eaten raw armadillo meat. However, getting their blood and other body fluids into an open wound could potentially be a problem as well. 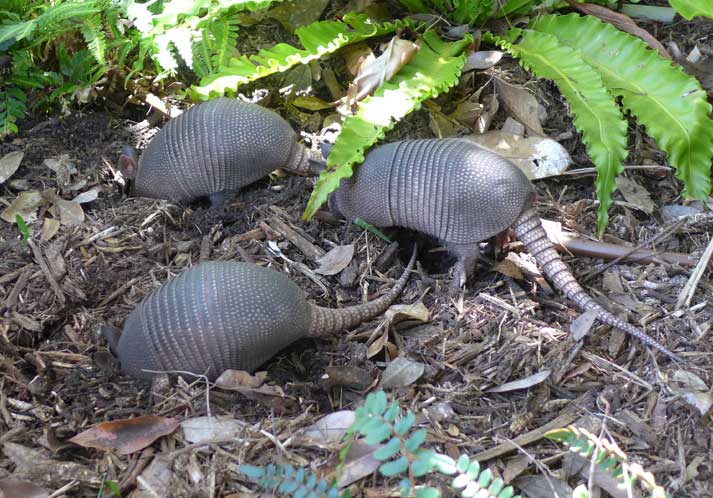 Photo from effectivewildlifesolutions.com
Armadillos can be both beneficial and destructive as they hunt for insect pests.

Armadillos, meaning little armored thing according to “Armadillo On Line,” have been around since well back into pre-history. The Aztec name was Azotochtli, which means “turtle-rabbit,” an apt name given their propensity to jump and run.

The prehistoric armadillo, called a glyptodont, is said to have been about the size of a bear. Imagine that! I don’t even want to think about what that dude would do to my lawn or my car! Wild hogs pale to insignificance at the very idea.

Armadillos usually produce four young, all the same sex. Their armor is soft at birth, something their mom is probably grateful for, and within hours of their birth they are walking. Nursed for two months, they frequently stay with their mother for another 8 weeks before setting out on their career of lawn decimation.

Even though I’m not thrilled with their horticultural vandalism, I have always felt that armadillos are a most interesting part of the fields and forests of Texas.