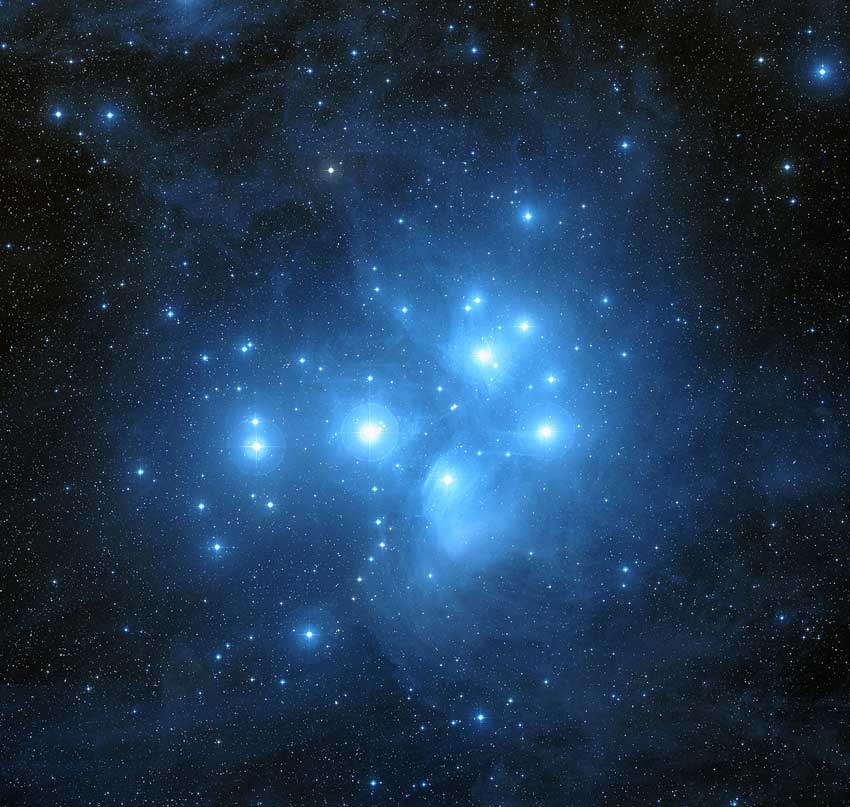 Photo by Davide De Martin & the ESA/ESO/NASA Photoshop FITS Liberator
A beautiful view of the Pleiades star cluster in the constellation Taurus.

Autumn officially begins the third week of September. But I never believe it until the humidity and temperatures drop, summer haze departs, katydids and locusts cease their frenzied chirping and singing, the hummingbirds head south, and leaves start changing color.

Every year as fall begins, the star cluster called the Pleiades, or Seven Sisters, appears above the eastern horizon. Currently, by 10 o’clock in the evening, this constellation is high in the sky and a reclining Orion, the Hunter is rising over the trees, warning us that winter will begin in about six weeks.

Planets, unlike stars, cannot be depended on as annual indicators of changing seasons because they wander across the sky on a schedule that isn’t as regular as constellations. In fact, the word planet anciently meant “wandering star.” This week as the evening sky darkens, Jupiter gleams brilliantly high in the south; the brightest celestial object in that part of the sky.

Fall colors are dead giveaways of seasonal change. For some time now, many leaves have been yellowing. Orange and red are beginning to flame in our fields and forests. Those colors have been there all along, but were hidden by the green of chlorophyll. Vital to plant life, and critical for us too, chlorophyll, when exposed to sunlight, allows green plants to make their own food from carbon dioxide and water and also produce oxygen – although most of our oxygen is generated by microscopic plants in the ocean.

Nature’s alarm clocks tell trees it’s color time, not cold weather or frost. In fact, freezing temperatures can quickly destroy fall colors. Trees, like most living things, have built-in biologic timers that keep track of day length and are not affected by Daylight Savings Time. When the number of hours of light drops to a critical point, trees stop producing chlorophyll and shut down their food manufacturing operation. As the chlorophyll fades, the yellow and orange of carotenoids, the same substances that color carrots, banana skins, and sunflowers, begin to show through. Xanthophylls show up as tan and brown while anthocyanins, formed from trapped sugar in the leaves, add red, blue, and purple. These colors combine to give us the wide spectrum of autumn colors.

Every tree and shrub has its own characteristic fall leaf color. Sassafras is gold while sumac and dogwood, along with sweet gum, glow brilliant red. As the season progresses, maples and oaks of many kinds will turn yellow, red, and crimson. Even poison ivy contributes to fall decorating, turning bright red. But be advised that it can still cause a serious rash, even at this time of the year. 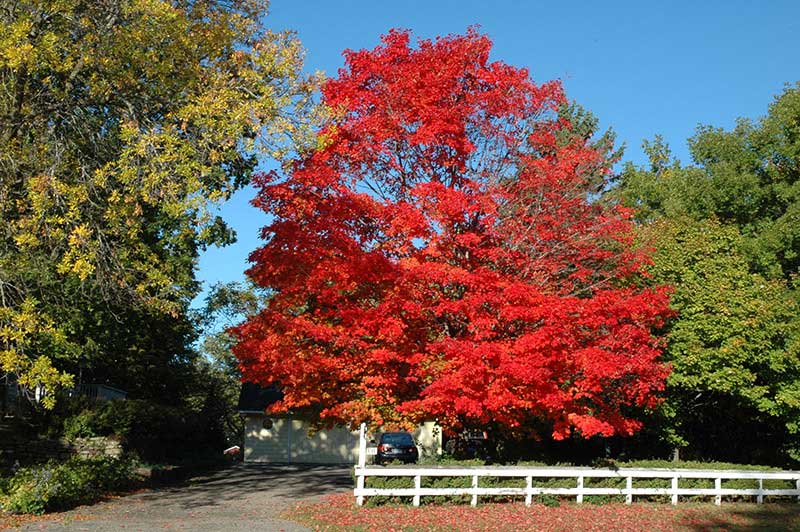 Maple trees oftem turn a spectular red in the fall.

Color change comes in waves, first yellow, next orange, and last red, with each new spectral burst separated from the next by five days to two weeks. Depending on weather and location, we should have nice leaf color through Thanksgiving. Sunny, cool, dry days produce the best show, while cloudy, drizzly weather and warm days usually mean a disappointing color season.

Thursday the 26th is, of course, Thanksgiving. As I watch and read about the wars, famines, illness, crime, and government tyranny in the world as well as in our own country, I constantly remind myself of the numberless blessings we have. At the same time, I fear for our future as I watch the general apathy of our citizens in the face of progressive attempts to erode our treasured freedoms. This Thanksgiving, perhaps more than ever before, ought to be a time of serious concern and rededication to what our forefathers intended for this great country and what it means to be a citizen of the United States of America. Citizen involvement and vigilance are vital but too often absent.

But, fall is still a time for tranquil appreciation of nature’s bounty and beauty that no government nonsense can dim. In short, it is a wonderful season. Changes are taking place daily in the weather, the sky, the fields and forests. Nature seems to be gearing down; relaxing a bit. Evenings are cool, and lazy crickets, their chirping slowed by falling temperatures, languidly announce a changing of the guard. It’s fall folks. Get out and enjoy it. Just don’t become too complacent.