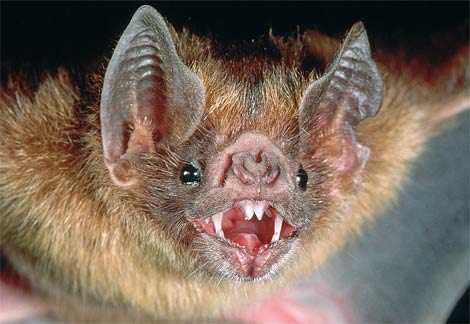 This close-up of a vampire bat clearly shows its needle-sharp teeth.

Vampires are all the rage in current movies. Biting helpless victims, they turn them into one of their own. Ghastly. Are there really vampires? Yes – but they’re bats.

Texas is host to at least 38 different kinds of bats. Depending on the species they eat pollen, fruit, insects, frogs, scorpions, centipedes, and blood. Blood? Yep, some do eat blood. Vampire bats live in central and south America and southern Texas and are blood feeders. Those in central and south America normally dine on blood lapped up from wounds they inflict on cattle. But, some are shifting to people. In Texas, the hairy-legged vampire bat usually gets its blood meals from chickens and small wildlife.

All bats can carry rabies, which is normally transmitted only by bites, but exposure can also come from saliva, body fluids or nerve tissue getting into open wounds or the mucous membranes of the eyes, nose or mouth when someone handles a sick or dead bat.

Rabid bats are generally not aggressive. They simply become very sick, lethargic and often paralyzed, falling to the ground and dying. Although most bats are not rabid, any bat bite should be washed thoroughly with soap and water and reported to a physician. Never handle a bat, whether it appears sick or not. Dead or ill bats should be reported to your local health department or animal control.

If you awaken with a bat in your room, or a bat is found in the room of a bed-bound person, see a doctor. Because bats normally encountered in Texas have very tiny teeth a bite may not even be noticed. Never touch a bat that appears sick or can’t fly. Bats that appear ill should be captured by health professionals and tested for rabies. Human symptoms of rabies can occur as long as one to three months or longer after exposure. Once symptoms develop, death is almost always certain in spite of treatment.

Amazingly, in the 1950s there were two fatal cases in Texas of humans contracting rabies not by a bite but from airborne virus. The victims were exploring bat infested caves near Uvalde, Texas and apparently inhaled the virus.

Under normal conditions, bats are very beneficial animals. They are voracious insect eaters and a single little brown bat can catch 600 mosquitoes in an hour. It has been estimated that the 20 million Mexican free-tailed bats from Bracken Cave in Texas eat 250 tons of insects each night!

Hardy and adaptable, bats such as the Mexican free-tailed sometimes fly up to two miles high to feed or catch tail winds that carry them over great distances at speeds up to 60 miles per hour. Some are also long lived. Little brown bats sometimes live more than 32 years!

In many communities, folks put up bat boxes to encourage them to stick around and munch a bunch of bugs. If you choose to do this, I’d recommend that the boxes not be too near the house for possible disease transmission reasons. If you’re interested in learning more about bats, Google Bat Conservation International.

Take some time to watch the twilight evening sky and enjoy these little winged mammals. They’re Texas’ own Mousketeers or Mice In Black, dedicating their lives to insect control!