Some folks get downright eager where real estate is concerned. Even when they’re not actually in the market to buy, they like nothing better than traveling slowly through areas of new construction, eyeballing all the newly emerging homes and businesses. True aficionados will even walk right in and wander around buildings under construction to check out the layout.

Recently, “eager as a beaver” took on new meaning in the real estate construction game, when a 40-pound prospective occupant brazenly walked into a house under construction in the Colony Creek subdivision adjacent to Waterford on County Road 210 in Nacogdoches. Dragging his big, flat tail behind him, he walked right up to one of the workers, who hadn’t noticed the critter approaching, until they were nearly nose to nose. From that close vantage point, kneeling while working on a cabinet, and with little face to face experience with beavers, the workman couldn’t see the animal’s tail, only his fuzzy face, pointy nose, whiskers, and beady little eyes. “That’s the biggest rat I’ve ever seen in my life!” He exclaimed, sprinting from the building at about the speed of a deer. 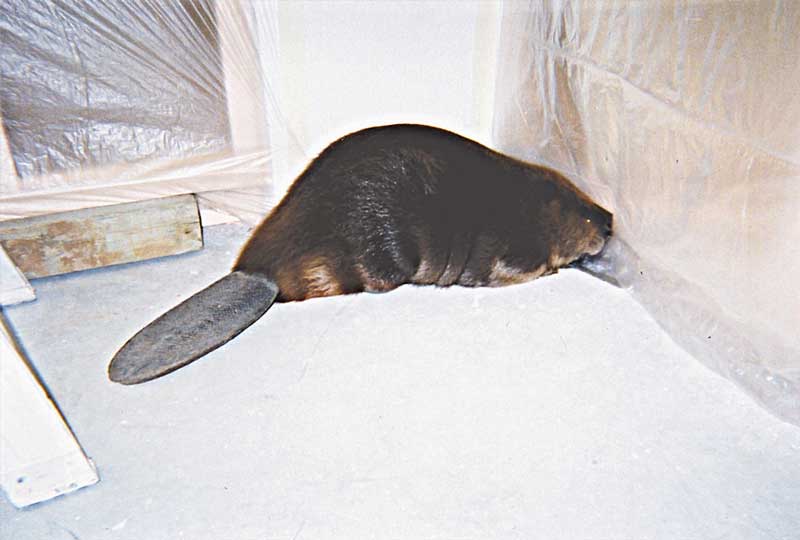 Photo by Ira Lawson
This beaver wandered in to Colony Creek to check out the construction methods.

Ira Lawson, the local contractor at Colony Creek was quickly summoned, only to find that just the worker was worried. Billy the Beaver was still leisurely examining his potential new home. Well, what can you expect? Beavers live along streams and ponds in family groups called - guess what? Colonies. And here, clearly identified by an illuminated sign, was the Colony Creek subdivision; an open invitation. I can almost hear the conversation. “Maw, I’m agonna drift on over to that there new housing place up yonder creek. They’re advertising for new residents. It’d sure as heck be a lot easier than building our own. They got ‘em some kinda mechanical beaver that does the chewin’ for ya.”

Even though that all sounds pretty reasonable to me, Ira Lawson wasn’t thrilled about this new business opportunity – wanting to keep up appearances and all that. So, after taking a few pictures, some very close up, of the completely unflustered potential customer, he rigged up a piece of PVC pipe with a rope to noose the buck-toothed brigand and take him into custody. All went well until the first touch of the rope and then it was “Katy bar the door!” It turned into a free for all. Mr. Lawson said the beaver leaped over a 2-foot barrier, dragging his would-be captors with him, and headed for the tall timber. After a significant struggle, the trespasser (now no longer a prospective customer) was terminally subdued. I mean, you can’t have information leaking into the general beaver population about pre-cut and assembled lodges. Next thing you know, nobody’ll be able to get any sleep in Colony Creek, what with all that noisy tail-slapping and tree gnawing in the wee hours.

Actually, this wasn’t the only beaver excursion in the general area, or for that matter East Texas as a whole. A few years ago, a free-thinking beaver showed up in a swimming pool in Waterford, one of the plushest developments in Nacogdoches. He too was evicted by the affronted homeowner. Personally, I think it would have been pretty neat to have your own personal beaver swimming in the backyard, but as a biologist, I have a number of slightly strange ideas.

Beavers, even though very interesting, can become serious pests, damming up streams, flooding pastureland, damaging timber, and interfering with stream flow. Now found throughout the United States, Texas has more than its share. Steve Hill, in the Texas A&M Agriculture News, writes that most Texas beaver problems are found in a 22-county area of East Texas, where they caused more than $20 million of damage in 1994. Besides causing flooding, beavers are also an intermediate host for the Giardia organism that causes a very unpleasant gastrointestinal disease sometimes called "beaver fever” in people who drink untreated water from contaminated streams, springs, lakes, and ponds.

So, even though they may be fascinating to watch, I suppose it’d be better if they stayed out in the fields and forests, and their own colonies and creeks, instead of moving on into town.