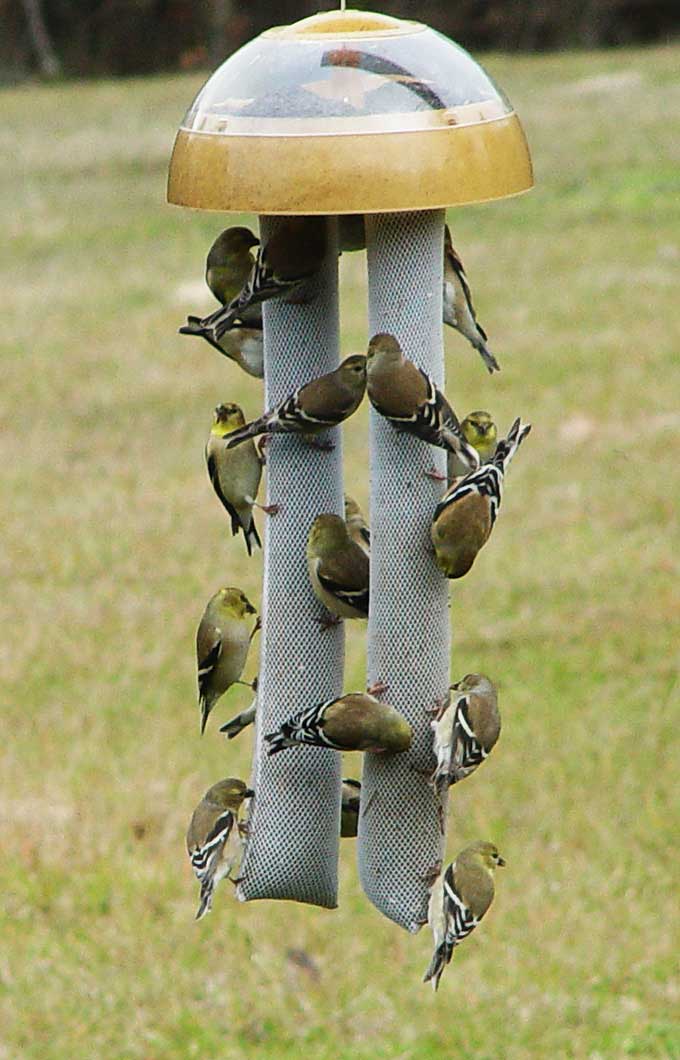 Photo by Paul H. Risk
Goldfinches eating thistle seed at our backyard feeder. They often cover the feeder socks in their zeal for a meal.

Recently, I was watching some of the feathered critters in our backyard stuffing their faces with seeds at one of our feeders and it occurred to me that a lot of familiar sayings originate with birds.

Ever know someone who was jumpy, easily spooked or frightened? Such folks are often called “flighty,” and watching a flock of goldfinches scatter in panic at the slightest provocation, it’s easy to see where the term comes from. They seemed scared of their own shadows. Of course, they have good reason. Predator avoidance and living to see another day requires fast reflexes and very acute situational awareness.

Then there are some people who are shallow, don’t seem to get the point, and can’t stay focused on a task or idea. Some people call ‘em ditzy. But “feather-brained” or “bird-brained” could also be applied. In addition some of these people seem to run together in groups. As they say, “birds of a feather flock together.” Whups! That’s probably profiling. Not PC, but true just the same.

‘Course, some of what I’ve written here may “stick in your craw” or be “hard to swallow” if you don’t agree with or believe my allegations. A bird’s “craw,” or crop, is a sac-like pouch connected to their gullet or throat in which food collects as it begins to digest. It they swallow something that’s too large, it may lodge there – stuck in their “craw.”

A lot of what birds eat is very hard and it would be nice if they could chew it thoroughly before swallowing, something my Mamma always told me to do. She said if I didn’t, it would “stick in my gizzard!” Fact is, people don’t have gizzards. But birds do, and they are a marvelous organ. Since birds also don’t have teeth – remember “scarce as hens’ teeth” – a built-in crusher – a gizzard – comes in handy. This powerful, muscular grinder crushes and breaks up hard food. To aid that process, birds often eat sand, grit, or gravel. Mixed with food in the gizzard, it serves as a grinding agent. A turkey’s gizzard is said to exert a pressure of over 400 pounds per square inch. One report says that a turkey’s gizzard can crush a pecan in an hour and hickory nuts in 30 hours. If you’ve ever tried to crack a hickory nut, even with a hammer, you can understand how amazing that is. Even pieces of glass and steel needles are reported to be crushed by a turkey’s gizzard.

It’s no wonder then that a person with courage and the ability to tackle tough and often dangerous tasks has been said to have “true grit” or “sand.” Some said they “had sand in their craw.” John Wayne, who starred in the original movie True Grit as a tough, no nonsense U.S. Marshal that you didn’t want to mess with, epitomized this description.

In 1878 author Fred Hart wrote in Sazerac Lying Club of another such man in the small mining town of Austin, Nevada, whom he described as “. . . always so good-natured and smilin’ like, that a stranger would a thought thar warn’t no sand in him, and he wouldn’t fight nothin’. But he always carried a big bowie in his boot-leg and a dragoon six-shooter in his shirt, and would fight a rattlesnake and give it the fust bite.” Now that gentleman had some real sand.

So my hopes are that you won’t get too flighty over all the problems in today’s global society, and that you’ll have the grit necessary to persevere no matter what the challenges. At the same time, be careful not to bite off more than you can chew and you’ll never get anything stuck in your craw. Whatever you do, try not to make any bird-brained decisions.