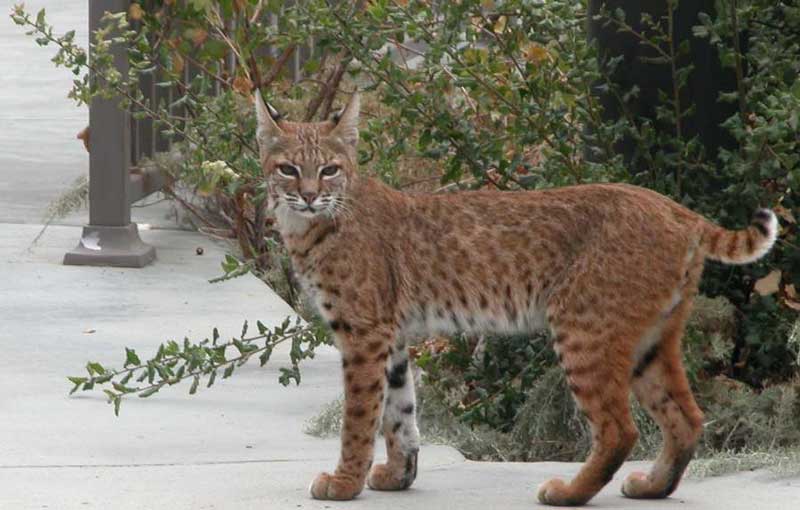 Photo by Chuck Haznedl, by permission
Wild animals are often found very close to or right in developed areas. This one was on the sidewalk only a few feet from the Eaton Canyon Nature Center in Pasadena, California. A residential neighborhood is just across the street.

No, the Nacogdoches Bobcats is not the name of a local sports team. Or, for all I know, it may be. But the ones I’m referring to are furry predators that roam our fields and forests.

Up until recently, my only bobcat sighting was a brief glimpse as one scuttled quickly across the road ahead of my car a few years ago. But, two days before Thanksgiving 2009 a brazen bobcat stalked down our driveway 100 yards from the house as though he owned the place. You’ll notice that the use of “brazen” is only a reference to my attitude to trespassers on “my” property. This critter probably felt that I was the interloper. He may be right.

Walking with the stiff-legged gait common to bobcats, he was in no hurry as he drifted along looking for a snack. My motion sensing infrared camera triggered in video mode and his right eye gleamed with reflected light as he calmly moved along. Although infrared shots are not in color, black markings were easily seen on the inside of his left front leg. The spots normally seen on bobcats were indistinct, but his short tail was a dead giveaway.

A couple of weeks earlier our neighbor’s game camera captured a spotted cat at his deer feeder, but it was at the very edge of the flash limit and difficult to make out. It looked unusually long and we wondered if there was a chance of it being an ocelot. Its tail was hard to see in the photograph. Ocelots have long tails and would be extremely rare here in East Texas. The last ones were probably seen in the early 1900s.

My guess is that my neighbor and I are sharing a bobcat. He appeared about 7 p.m. on my friend’s camera. Mine strolled by at 1:45 a.m. which is also about the same time our cat Hobbes usually wanders the same area each night. Keep your eyes open, Hobbes. Bobcats like domestic cats for dinner, and old Bob is at least twice your size.

Ranging over a wide area of the United States bobcats are common in Texas. Small but powerful cats, they weigh from 13-30 pounds and are 21 inches tall at the shoulder and 30-50 inches in length from their nose to the base of their tail. Their bobtail, from which they get their name, is about 5-8 inches long. They are trapped and hunted for their beautiful buff and black spotted hides. Personally, I’d rather they kept their hides.

Mating season starts in February and after about 60 days they give birth to 2-7 young with the average litter being 3. Weaned at about 2 months, they stay with their mother until fall and then they’re on their own.

Bobcats are generally nocturnal. According to the Texas Dept. of Parks and Wildlife they hunt and eat wood rats, ground squirrels, mice, and rabbits. They also eat birds, deer carcasses, eggs, frogs, and reptiles. In short, if they can subdue it they’ll eat it. Excellent tree climbers, these fast predators have very large feet studded with needle-sharp claws.

The list of predatory mammals in our area is extensive, and most of them frequent the woods, and sometimes the lawn, around my home. They definitely include: coyotes, foxes, bobcats, feral domestic cats and dogs, and people. There may be an occasional cougar, and black bears are rumored to be returning. When you throw in hawks, owls, and snakes, the reality is that it’s a jungle out there in the fields and forests of East Texas. And it seems the wild animals are getting closer and closer to us all the time. Maybe right in your neighborhood. Great huh?