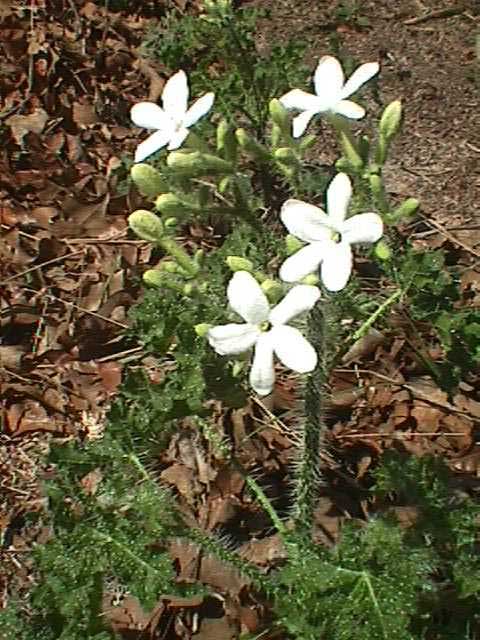 I’ve long heard the saying that “if it has thorns, stingers or fangs you must be in Texas.” Texas bull nettles certainly more than live up to that reputation. The white, showy flowers of the bull nettle may be pretty, but the rest of the plant is covered with fuzzy stinging hairs. Growing from a foot up to 36 inches, bull nettle is abundant right now. If you touch it, the needle-sharp, brittle, glasslike hairs easily enter the skin and break off, releasing formic acid, a toxin usually associated with ant stings along with serotonin and histamine, a substance that causes pain and swelling. In short it immediately hurts like blazes, producing severe stinging, burning pain along with raised, red welts. For some people, the plant’s milky, poisonous sap can also cause an allergic reaction. The spines burning pain usually lasts from a couple of minutes to as long as 45 minutes. The welts and redness may disappear more gradually. This Texas resident has the reputation of being the most painful of all nettles. According to dictionaries, something “nettles” you if it causes irritation or annoyance. That’s a gross understatement with regard to this plant.

For many years the home remedy for bull nettle “stings” was the application of baking soda paste. That may help neutralize the plant’s formic acid but more likely, the moist coolness of the paste just eases the discomfort. Nowadays, there are topical antihistamine creams such as Benadryl® or steroid creams such as hydrocortisone that are more helpful. In the rare case of a generalized reaction, your physician may prescribe an oral steroid, but you can also try Benadryl® tablets according to package instructions. Antihistamines, as you probably already know, chemically inhibit the histamine that causes redness, pain and swelling in the sting area.

Bull nettles do well in fields and pastures that will grow little else. A neighbor of ours cleared a field a couple of years ago for cattle pasture and the nettles seem to have almost taken over. I’m sure neither he nor his cows are pleased with that. 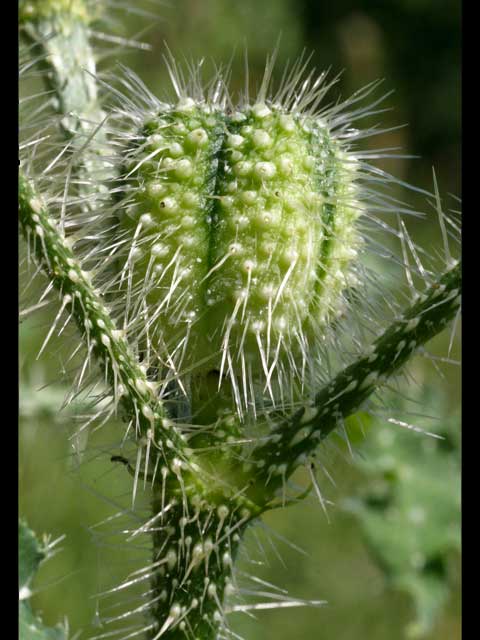 Photo by Steven Schwartzman
Supposedly the seeds inside the bull nettle capsule are edible. But how do you get past the spines?

Cattle are generally wise enough to avoid this plant. I don’t know if it smells bad or after one bite or a touch to their nose, they learn a painful life-changing lesson and won’t go near it after that. It’s hard to imagine what a bite of bull nettle must feel like and I don’t plan to give it a try.

Amazingly, the mature smooth seeds that develop in bull nettle seed capsules are reported to be edible if roasted. I’ve not tried them and how you’d get past the stinging hairs I don’t know. As the season progresses and the seed capsules form, I may experiment a little with them. Or maybe not. The plant is in the Euphorbiaceae family, a group that is world renowned for its poisonous members.

So, you may ask, what good are bull nettles? That kind of question is usually applied to things in the environment that are inconvenient, unpleasant or interfere with human activity. In other words, what good are: mosquitoes, flies, poison ivy, cockleburs, grass burs, skunks, wild hogs and so forth, endlessly. From our standpoint, bull nettles may just be a condition of our mortality. From a Biblical perspective, Genesis 3:18-19 states that when Adam and Eve ate forbidden fruit in the Garden of Eden the earth was cursed to bring forth thorns and thistles, and possibly bull nettles.

In any case, nettles are here and their protection is those painful stinging hairs. So, they prosper when other less prickly plants are eaten by herbivores. Bull nettles are good for themselves, and maybe that’s enough.

The rule is, don’t run bare-footed or bare-legged through the fields, or if you do and get yourself zapped, you can blame Adam and Eve. But you’ll enjoy our fields and forests more if you just avoid them entirely.