Recently we’ve been traveling around western Illinois at a place called Nauvoo, a major historic site for the Church of Jesus Christ of Latter-day Saints, on a huge bend of the mighty Mississippi River – a story in itself. But, one of the most impressive things has been the water birds, specifically the Canada geese. They are everywhere. In the morning and afternoon, they fly in V-shaped echelons with the most experienced birds in the lead. Their honking, as they communicate with each other, is amazing and can be heard at long distances. 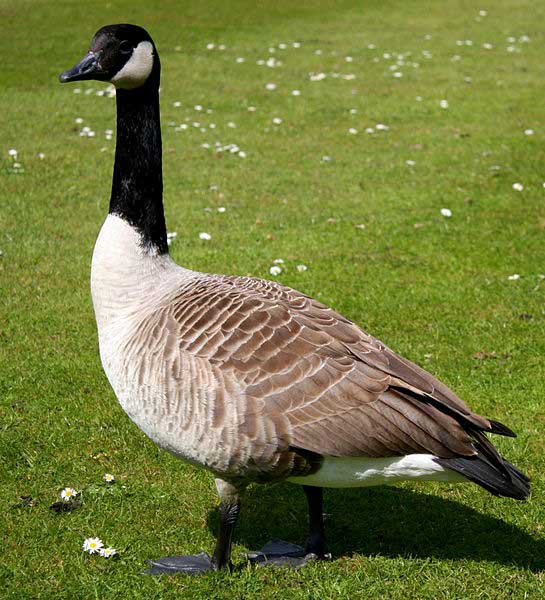 Adults have been setting up nests over the past several weeks, laying 2-8 eggs that hatch in about 25-28 days. Often their nests are built on elevated spots. including muskrat houses. that provide a clear view of potential dangers. Recently, fuzzy newly hatched goslings have been joining their parents in foraging missions in every grassy area they can find. They are now about a third the size of the adults, and these furry balls of downy feathers, always closely watched and chaperoned by their moms and dads, have been shuffling along with their beaks to the ground in search of food. That’s a little like putting your nose to the grindstone, but not quite. Usually, one adult stands guard with its head and neck swiveling around like a periscope, keeping a safety watch on the family. But, they’re not particularly skittish, and once they determined our stopped car wasn’t a danger, both parents soon ignored us and joined in the picnic. 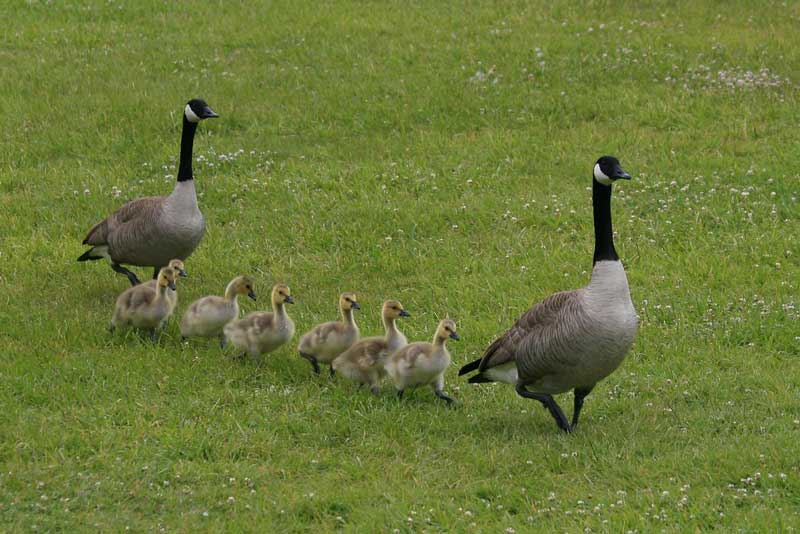 From bluewallpaperbackground.weebly.com
A family of Canada geese go out for a walk, with mother and father keeping watch.

The survival rate of goslings is between 70 and 90 percent by the time they are a year old. Adults have few natural predators, but eggs and goslings are preyed upon by crows, ravens, raccoons, coyotes, and other animals.

Canada geese eat a wide variety of food including grasses and water plants, as well as seeds and berries later in the season. Corn on the cob is a favorite and they will descend on a crop and help themselves – not something that endears them to farm folks. They also eat rice, wheat, and other grains especially when they first sprout. Geese can digest grass, and a neatly mowed lawn is a wide-open invitation. In large numbers, their droppings can thoroughly foul an area, and in some places, they are considered pests.

The largest species of these geese can weigh up to 20 pounds and have a wingspread up to 65 inches, or just over 5 feet. Avidly sought by hunters, over 2 million geese are shot each season, but this pressure hasn’t seemed to threaten their population.

Canada geese mate for life. Their “divorce rate” is very low, an example that might be taken more seriously by humans. Perhaps they are more selective in mate choosing and/or they are more cooperative and tolerant about their mate’s behavior – another plus for them, and a sad statement for humans, who have a divorce rate in this country of 40-50 percent. Since my wife and I have been married 54 years, I can risk being critical. She’s put up with a lot over the years! 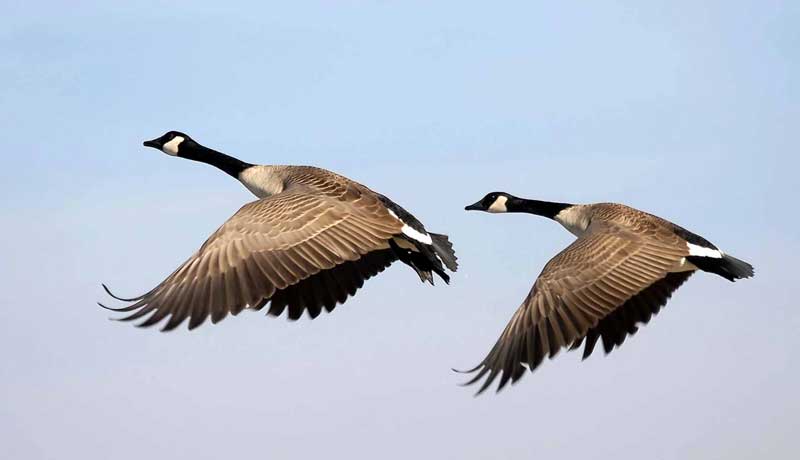 From www.correiopaulista.com
A mated pair of Canada geese take wing.

In long-distance flight, the lead bird in a goose formation drops back and another takes their place to minimize fatigue, and other birds continue to rotate the lead. Their V-formation flight pattern places them in the smoother air behind and to one side of birds ahead of them, a labor-saving behavior.

Canada geese, if nothing else, are stately birds, walking head up in a manner that seems to declare they are masters of their environment.

They may be messy, but there’s something majestic about a flight of Canada geese honking their way up the river and flaring into graceful landings that hardly ruffle the water. They grace any area with their presence. To me they speak of wilderness vastness, and here in this village that was once the very edge of civilization, they add to that aura.