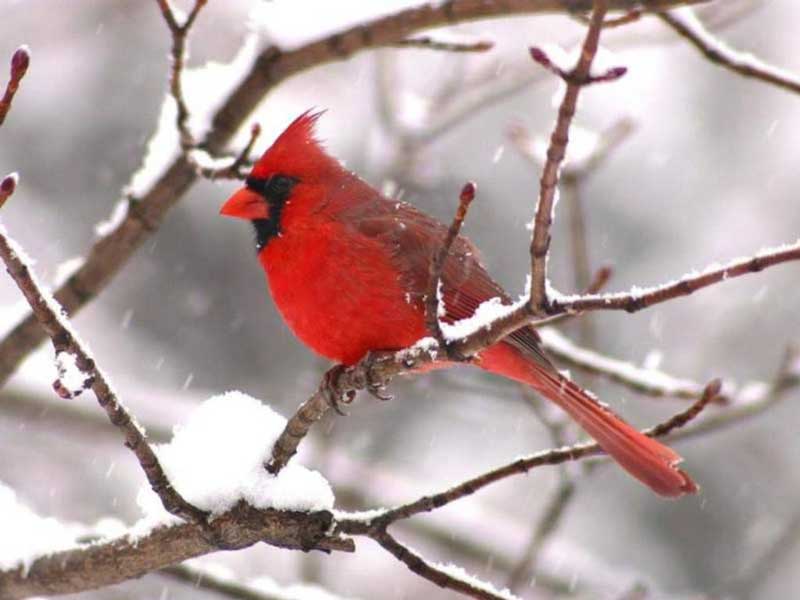 Photo courtesy of freewildlifepicassa.blogspot.com
A male northern cardinal - Redbird - is a beautiful sight during the winter.

Our Cardinal friends, called redbirds in East Texas, are doing their best to brighten up the winter scenery. Year-round residents in the eastern two-thirds of Texas, they are found throughout the eastern half of the United States and across most of Mexico. About 9 inches long, but weighing only one and a half ounces, their wings span a broad 12 inches. Cardinals have a reddish, short, massive beak that enables them to easily crack the hulls of seeds. Typically, males are bright red with a black mask around their eyes, black at the base of their bill and a small black bib on their throat. Females are yellowish-brown with a tinge of red. Both male and female have a prominent backward pointing crest on the top of their head. As with most birds, males’ bright colors help them attract mates while the more drab female coloration protects them from predators. During the winter, when mating is not a subject of great interest, hormones in their bodies cause male feathers to be less brilliant than during spring and summer.

These birds are frequent and welcome visitors to bird feeding stations here, where they prefer striped sunflower and safflower seeds but they also feed on Pyracantha and Yaupon berries, shrubs that are frequently used as landscape plants in Texas. Watching a cardinal eat a sunflower seed is amazing as they crack off the hull, letting it fall while retaining the internal “meat” of the seed in their mouth. Constantly glancing around for danger, they never miss a beat in the nut cracking operation. Other food includes insects and a wide variety of fruit and seeds. As much as one-third of a cardinal’s diet in summer may be insects, but in winter ninety percent is made up of seeds and fruit.

In less than a year after hatching, cardinals are mature enough to mate, a process that takes place during spring and summer. During courtship, the male at a feeder often places a shelled sunflower seed in the female’s mouth; a bird’s idea of a date for a burger and Coke.

Two to five grayish, bluish or greenish, dotted or spotted eggs about an inch long are laid. They hatch in 12-13 days and from time to time, the male may help by sitting on them. Two to four young hatch and remain in the nest for nine or ten days before they are developed enough to fly. Cardinals usually produce two or three broods each year. 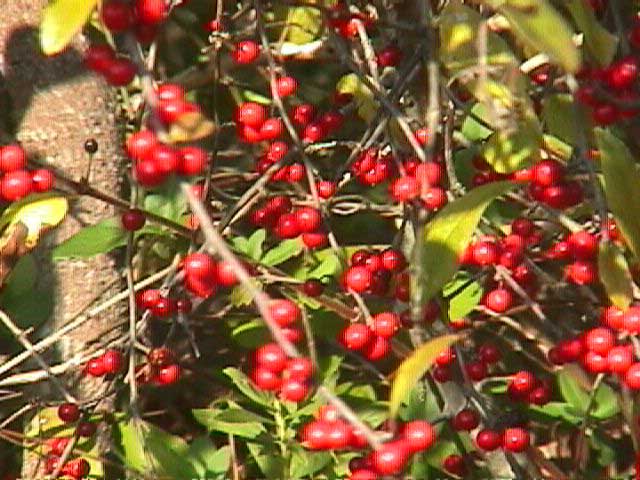 Photo by Paul H. Risk
Yaupon berries are favorite food of cardinals, as well as ornamental in the garden.

As anyone can see by observing these birds at a feeder, they are very territorial and, with the exception of their mate, will drive others away. Usually one pair of cardinals requires about 4 acres of living space. However, that doesn’t mean your backyard must be that large, only that the whole area they frequent has to be 4 acres in size. Sometimes cardinals group together in flocks of 60-70 birds, but more often they are in pairs. Cardinals sometimes attack their own image in reflective surfaces like windows or mirrors, so although they are undisputedly sensitive about territorial intrusion, they don’t make high marks for intelligence. Numerous cardinal pairs live along our road and tend to forage and feed in fields along the east side of the road, but nest and roost on the west. Whenever a car drives down the road, those in the field, rather than ignoring it, fly at breakneck speed, back to the woods across the road. This aerial race usually starts at the very last second and instead of gaining a little altitude, they zip along about 4 feet off the ground, barely getting across ahead of the oncoming car. You’d think a couple of near misses like that would teach these spooky birds a lesson, but day after day, as I drive the road, they repeat their heedless and needless dashes. As I said, cardinals aren’t mental giants. Their actions are merely programmed reactions, not clearly thought out strategies.

Some folks say cardinals like people. That’s expecting too much. They are tolerant of people and easy to attract to bird feeders, but they prefer to be close to a quick escape route to adjacent trees and shrubs. Their call of “sweet! sweet! sweet!” is recognized by most people and is heard throughout the year. Both males and females sing, but Texas Parks and Wildlife biologists say females usually sing only after males have established territory but before they begin nesting operations.

During the 1800s, these beautiful birds were trapped in large numbers during the winter and sold as caged pets. They were much in demand because of their bright colors and cheery songs. Cornell University ornithologists say that many of the captured birds were sent to northern states and thousands to Europe. However, the Migratory Bird Treaty of 1918 ended the practice.

If you have a feeder, keep it filled ‘til warm weather or start one now and enjoy these brilliant, perky birds. They, like so many other jewels of nature, lend variety and beauty to our environment. Have a happy, healthy and successful New Year in the fields and forests of East Texas.