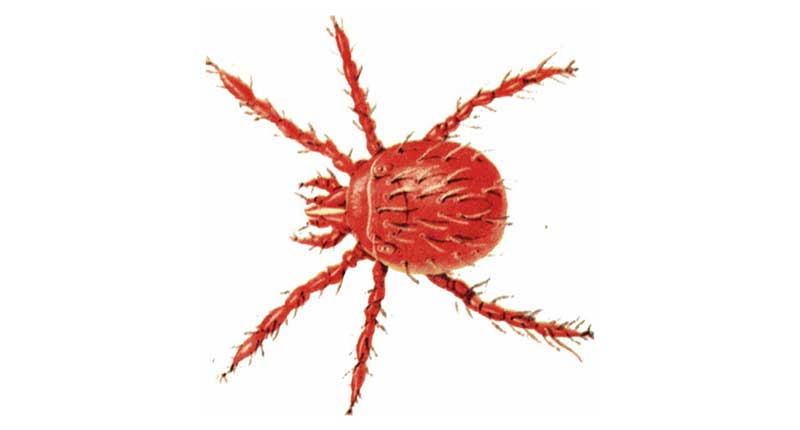 From wideopenspaces.com
Chiggers are so tiny you can barely see them. Less than 1/64 of an inch long, the itch their bite produces can be pure misery.

Our rains this spring should have made a lot of them really happy and hungry. Wandering through tall grass is a sure bet to be viewed as an open invitation to them. And, whatever you do, don’t lie down in the grass when Spring Fever strikes. I remember moving to Texas as a kid and spending one whole afternoon during my first summer here draped out in the grass enjoying the blue sky and clouds. That night mysterious, itchy red welts appeared on my ankles, behind my knees, and around my waist. For the next two weeks, I did everything possible to scratch 'em raw and succeeded admirably. I thought they were going to drive me crazy – although my father said that wasn’t a drive, just a short putt! In any case, I’d found chiggers – or they’d found me.

Sometimes also called “jiggers” or “red bugs,” chiggers are almost invisible, reddish mite larva. They like low, damp areas with heavy vegetation best, but do well in lawns too. A tiny 1/64 of an inch in size, they lurk in the grass until they get a chance to attach themselves to you. Then they inject a skin dissolving chemical, and drink the resulting liquid.

Chiggers Don’t Burrow Into The Skin

A popular and widespread misconception is that chiggers bury themselves in the skin. They don’t. They also don’t feed on blood. They just dissolve a little bit of you and make a tiny open wound. Once they’ve eaten their fill of skin soup, they drop off, usually in about three days unless they’re molested. Four to eight hours after the chiggers attach themselves, the itching starts and red welts appear. This misery often continues for up to two weeks, and some unlucky people develop a generalized allergic reaction that causes severe swelling and fever.

Chiggers Are Not Ticks

Closely related to spiders and ticks, adult chiggers become active in the spring when females lay their eggs in sheltered places. These hatch into the six-legged larvae that create problems for people, birds, reptiles, and amphibians. I wonder if chigger-bitten toads and frogs itch as much as we do? Favorite feeding spots, as you may well know, include places where clothing is tight, such as beneath the tops of socks and on the skin under belts or elastic undergarments. They also like thin or wrinkled skin and armpits.

There are lots of folk remedies for chigger bites. Some only help because we think they do, while others actually give relief, but often not for the reasons we expect. For example, many people believe putting a drop of clear fingernail polish on a chigger bite suffocates the embedded chigger, and therefore stops the itch. Since the chiggers weren’t embedded in the first place, there’s nobody there for the polish to choke! The nail polish does, however, seal the raw, irritated wound the chigger left behind after his meal, keeping air away and significantly relieving the itch. Vaseline, cold cream, and baby oil also form an airtight coating that is helpful. Nowadays, there are also over-the-counter creams containing Benadryl and hydrocortisone that are a great help in alleviating that maddening itch.

An old timer once told me that putting sulfur in a sock and using it to dust ankles and waist areas would discourage chiggers. There may be some truth in that. Insect repellent containing DEET (N,N-diethyl-meta-toluamide) applied to socks or skin also discourages hitchhiking chiggers. Since it takes a while for chiggers to become attached, a hot, soapy shower will easily remove them while they are still roaming your body like little boll weevils, “jest alookin’ for a home.”

Chiggers are not disease carriers. So if you’re absolutely determined to lie in the grass, you will keep a lot of them happy, and also demonstrate your commitment to equal rights for all arthropods. But I don’t recommend it. An important point to remember is that ticks, which do carry at least four serious diseases transmissible to humans, live in chigger habitat too, so there may be safer things to do in the fields and forests of East Texas than napping in the grass.