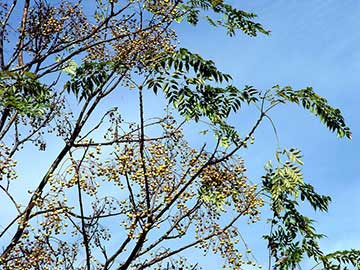 Chinaberries rattle down through the nostalgic fog of my childhood memories of Texas, and in my recollections, I can still hear them rumbling like rubber marbles as they rolled down the corrugated metal roof of the “tin house” in my friend’s backyard where we played. Then, as now, they turned yellow in the fall and add a touch of color to the landscape. As ammunition for slingshots they were excellent and effective projectiles, although they ran a distant second in stunning power to hand-thrown (chunked) horse apples, the wrinkled, heavy, green, softball-sized skull-thumpers that fell from the forbidden Osage Orange trees in my elementary school playground. I seem to remember though, that Chinaberries, shot from a slingshot had better range than horse apples!

The Chinaberry tree, a member of the mahogany family, is not native to the United States but like so many introduced species, this Asian native has widely invaded forests, pastures, and fence lines throughout many of the southern states. Chinaberries grow and spread rapidly, often forming thickets, and the tree may attain a height of 50 feet. Because of their adaptability and rapid growth, they were frequently planted as shade trees, and many a tale was spun in their cool comfort.

We citizens in the age of instant over-the-counter cure-all synthetic drugs seldom think much about the former uses of plants. But many – some might say most – have long histories of medicinal and household use. The Chinaberry is certainly no exception.

Chelsie Vandaveer, writing in www.killerplants.com [site no longer available], writes that in the 1633 edition The Herbal or the Historie of Plants, John Gerard called it the “beade” tree because “the six cornered stone within [the berry] which being drawne on a string, serveth to make Beades…” In fact, the seeds were used as Rosary beads and tended to become more lustrous and dark with use, an indication to believers of divine intercession.

Vandaveer writes that chinaberry flowers were referred to as far back as 980 A.D. by Sina, as a treatment for nasal congestion, and it was said “the distilled water thereof killeth nits and lice, [and] presereveth the haire of the head from falling.” For both purposes, it was mixed with wine and the resulting potion used to wash a person’s hair. However, the fruit and seeds are very toxic, and Gerard warned that the fruit was “very hurtfull to the chest, and a troublesome enemie to the stomacke, it is dangerous, and peradventure deadly… the leaves and wood bringeth death even unto beasts…” 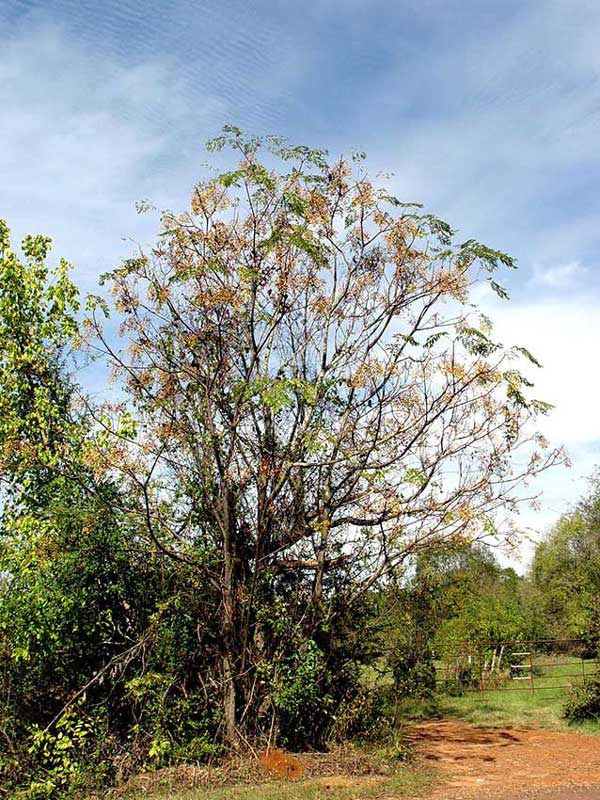 Today we know that Chinaberry bark, leaves, and seeds are poisonous to farm and domestic animals. Yet, as is so often the case, toxic plants may have medicinal properties as well. Chemicals in the tree are being investigated for their anti-viral and cancer treating possibilities.

Everyday uses of Chinaberry abounded. In pioneer days, its wood was fashioned into tool handles, furniture, and carvings. The fruit, crushed and beaten into water, produced a sudsy cleanser from which it received still another name of “soap tree.” In this capacity it bathed many a grimy body and laundered numberless batches of clothes.

The dried, pulverized fruit was also used as an insecticide. But flies were not its only victims. The ground-up seeds could be sprinkled into a pond or pool and the toxic chemicals the powder released would stun fish, which, much to the pleasure of the fish seeker, would then float to the surface for easy gathering. Be careful with this information however. Like the use of “explosive lures,” it is illegal to use any chemical substance to catch fish. But in a long-term survival emergency, they’d be very useful for food acquisition. By the way, the fish obtained this way are harmless to humans.

So, the more we know, the more we forget. Nowadays, pharmaceutical researchers are doing extensive studies on the medical uses of compounds found in plants, and with every passing year, more useful, naturally produced treatments are coming to light.

It really wasn’t so long ago that most drugs were “botanicals” derived from plants, and pharmacists studied botany extensively, as well as the chemistry and methods used to extract and purify their active components so that they could prepare prescriptions from plants through solution, extraction, and distillation right in the pharmacy.

The more things change, the more they stay the same, and our fields and forests serve as a constant reminder that in many cases, we are constantly re-inventing the wheel.