This winter there have been some amazingly cold temperatures in many parts of the country. Subzero temperatures have struck hard and stayed long in many places. Cold air masses from the polar regions have regularly slid south, bringing major ice storms, sleet and snow. And they just keep coming, even here in Texas. The first few days of this month have set low temperature records throughout the State.

Everyone knows that cold temperatures cause deaths every winter. We often hear of people “freezing to death.” Actually, they don’t really freeze to death, they die as their body temperature drops below the minimum required for the victim’s life processes to continue, a condition called hypothermia. After death they may freeze. 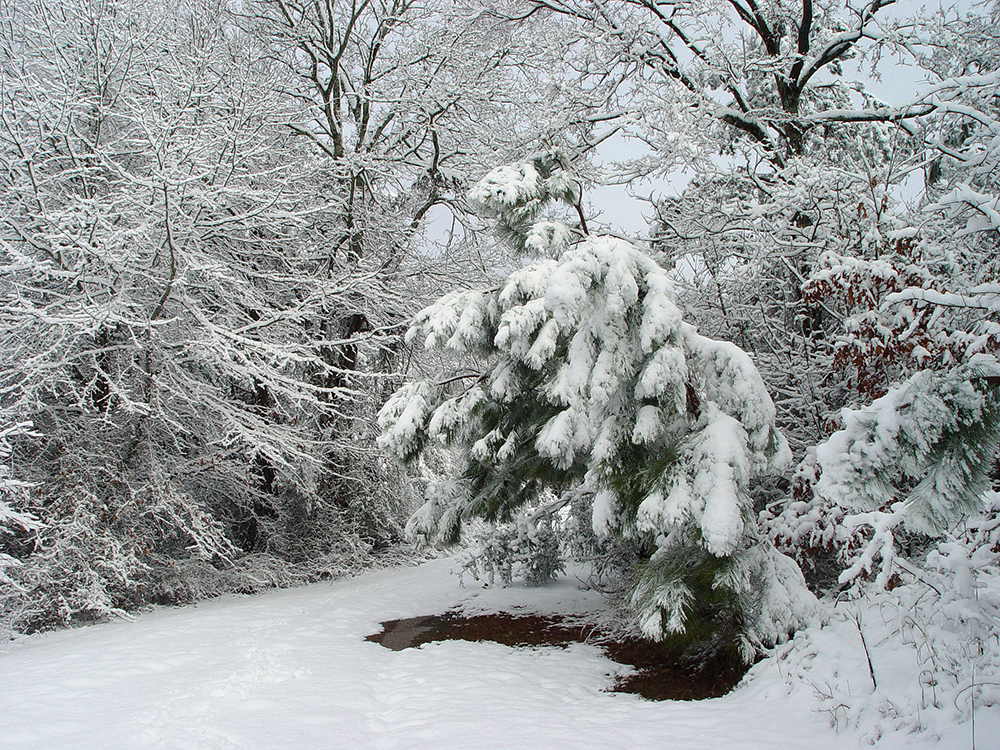 Photo by Paul H. Risk
This lurking “snow monster” beside our driveway in February 2010 seemed to dare mere mortals to approach. It has never returned. But, you never know, the way this winter is going.

Superficial freezing of the skin is called frostbite. And it can occur at surprisingly high temperatures. Frostbite danger is enhanced by wind and it takes a shorter exposure to freeze skin as the wind speed rises. In extreme conditions a person can have fingers, toes, nose or parts of arms and legs freeze.

Immersion in water is even more dangerous than exposure to cold air. A person in water near the freezing point can lose their ability to grasp a rescue line in 3 minutes or less. Heat loss in water is about 48 times faster than in air. Fresh water freezes at 32 degrees Fahrenheit. But sea water doesn’t freeze until its temperature drops to about 28 degrees F.

We poor featherless, fur-less, skin-covered critters are only comfortable at temperatures between about 75 and 85 degrees, without clothes. In our case, winter temperatures can be compensated for by adding layers of clothing, throwing on an extra blanket or comforter, or turning up the thermostat.

Outdoor enthusiasts, including hunters, fishers, hikers and climbers should conserve and regulate their comfort and safety levels by combining several layers of warm, insulating clothing and adequate headgear.

The idea is to stay warm but not sweat. Sweaty or wet clothing rapidly draws heat away from the body. Incidentally, wool clothing tends to retain heat even when damp or wet far better than cotton or other fibers. Down or synthetic fiber fluff is often used in cold weather coats for insulation. By adding or removing layers of clothing you can maintain a safe body temperature.

So how do animals survive outdoors in the winter? Birds have down feathers close to their skin and mammals grow a warm layer of undercoat that traps dead air and forms an insulating layer. Both birds and mammals fluff up or puff up their feathers and fur to enhance their cold protections.

Some animals are well adapted to cope with temperature extremes of heat and cold. Elephants have large ears filled with blood vessels to radiate heat away from their bodies. Jackrabbits have long lanky bodies, with thin, long legs and ears to help them stay cool.

But most Texas animals in winter need to hold their body heat, not lose it. Cottontail rabbits and snowshoe hares (another non-Texas critter) have stout bodies with short legs and ears to conserve heat.

Some fish in the Arctic and Antarctic have antifreeze proteins in their bodies, and so do some insects and insect larvae even in more temperate climes.

Interestingly, some animals maintain their body temperature by burrowing into snow. The tiny air pockets between the flakes of the fallen snow form insulating dead air spaces. Sled dogs curl into a tight ball and put their fluffy tail over their nose. This posture combined with burrowing into snow and their warm undercoat fur keeps them warm enough to survive.

Inuits living in arctic regions build igloos of snow blocks and the air pockets in the compact snow insulates their dwellings. They do not make igloos out of ice blocks as popular myth would have us believe. Ice has no insulating capacity. Sleeping in an igloo made of ice would be like bedding down in a freezer.

Northern dwellers, as well as people forced by an emergency to survive extreme cold can build a shelter called a quinzhee, or quinzee. It’s a large pile of snow allowed to settle, consolidate and then hollowed out to provide an effective shelter.

Winter is a beautiful time. The brightest constellations appear in the winter sky. And the full Super moon on January 1st was the largest and brightest of the entire coming year. Hope you didn’t miss it. So, have a Happy New Year and safely enjoy our chilly fields and forests.

Dr. Risk is a professor emeritus in the College of Forestry and Agriculture at Stephen F. Austin State University in Nacogdoches, Texas, and has taught outdoor survival for many years. Content © Paul H. Risk, Ph.D. All rights reserved, except where otherwise noted. Click paulrisk2@gmail.com to send questions, comments, or request permission for use.