Are there cougars in East Texas? You can start an intense debate at the drop of a hat with that question. The answer is yes, but in limited numbers. Human encroachment into their territory and changes brought about by housing developments, shopping malls and highways continually threaten and reduce their living space.

Cougars once inhabited most of the northern hemisphere from Canada to South America. Today, their range is much reduced and most people have never seen one in the wild. When they are observed, often only a fleeting glimpse is provided as the animal silently melts into the forest. 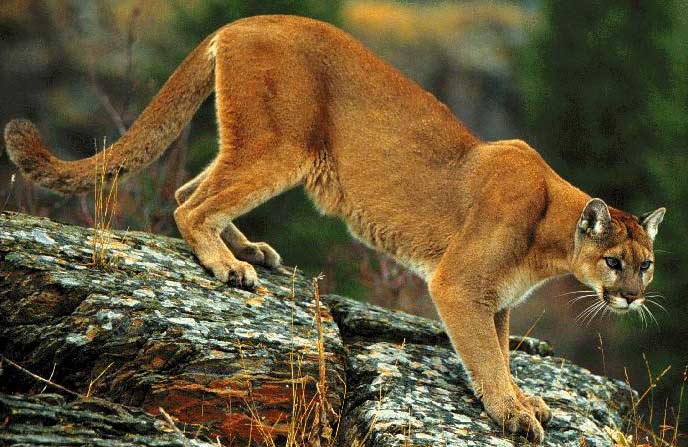 Photo from true-wildlife.blogspot.com
A cougar’s powerful shoulders and hindquarters give it amazing speed, and its long tail helps to balance it during chases.

Most Texas cougars now live in west, south-central and south Texas, but scattered populations are found throughout the state. Neighbors of ours have seen what are clearly mountain lion tracks on their property and one family who lives in a heavily forested area of the east-northeast part of Nacogdoches frequently see a full-grown lion. Of all things, it rather routinely wanders into their backyard, stretches out and suns itself.

Cougars go by a number of names, including mountain lion, puma and catamount. Secretive, predatory cats, they have developed almost a cult mythology. Their speed and deadly efficiency in pursuing prey are legend. Coupled with an almost magical ability to remain hidden in their environment, the cougar is truly an amazing animal.

Large cats, cougars can weight more than 165 pounds and be up to 8 feet long. Females generally weigh about 100 pounds. They are yellowish buff in color with relatively short hair and a long tail that they use for balance in chases after prey. Males have a wide range of 25 to 500 square miles. An expert predator, they are definitely not vegan or vegetarian. In the wild their food includes rabbits, feral hogs, mice and rats, bats, birds, cattle and sheep.

Texas Parks and Wildlife (TPWD) biologists report that cougar populations are progressively increasing in Texas. Some of the reasons for that include an increasing number of white-tailed deer. Food supplies may also be growing due to the large number of outdoor dogs and cats that people in rural and suburban allow to run free. Both coyotes and cougars consider canine and feline food fine fare!

Do cougars attack humans? Sometimes they do. Joggers, hikers and cyclists in California have been attacked and severely mauled by them. In 1983 a woman near Harlingen was injured while defending her children against a mountain lion and in 2003 a man in Ft. Worth was attacked.

A TPWD brochure entitled “Mountain Lions in Texas” provides the following recommendations if you see a mountain lion:

In reality, the chance of seeing a mountain lion in East Texas is slim and an attack is highly unlikely. Personally, I would be thrilled to see a lion here. If you see one, I want to know all the details and so would the TPWD.

To me, cougars are just another example of the amazing diversity in the fields and forests of East Texas. And even though there is an open season on them, I prefer to live and let live.