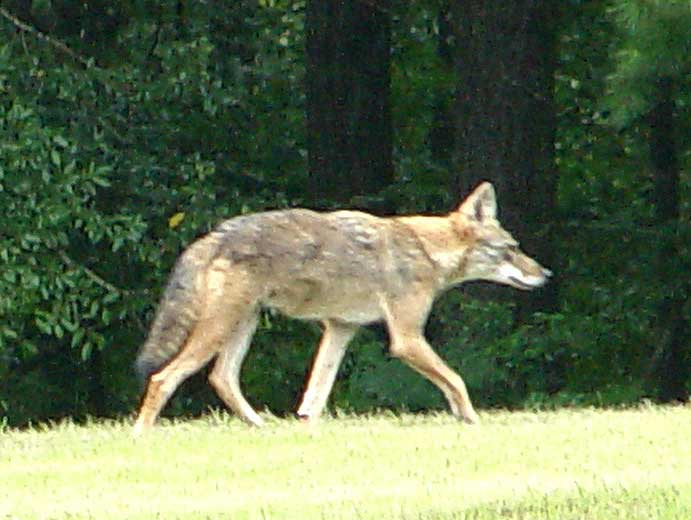 Photo by Paul H. Risk
A lone coyote who thinks he owns our yard strolls leisurely along looking for a peach snack. He thinks they’re his, too.

Our home at the north edge of Nacogdoches seems to be in the middle of coyote territory. Related to wolves and domestic dogs, their scientific name, Canis latrans, means barking dog. Often seen trotting through both our back and front yards, they serenade us in the evening with a yipping, howling, wailing, yodeling choir performance. A few can sound like dozens as they vary their voices almost like a ventriloquist. A passing train’s whistle or emergency vehicle siren can really set them off. This chorus doesn’t thrill our dog though. She prefers to cower in her doghouse when they’re around. That’s probably a good idea since coyotes like doggy snacks.

Coyotes have been common from ancient times and abound in Native American tales where “Coyote” is cast as a philosopher, a mischievous clown, or an evil trickster whose adventures include stealing food from honest folks. The Aztecs called them coyotl, meaning “holes” (where they spend the first part of their lives), and whether you call them KI-oats (KAH-oats in East Texan) or ki-OH-tees (my preferred pronunciation), we certainly have plenty of them here in Deep East Texas, where population estimates run as high as 15,000!

Why do coyotes make so much noise? They do it to keep in contact with their group, tell other roving bands where they are, help them estimate the abundance of kin, near and distant, and decide whether the neighborhood is just “gittin’ too crowded.” In spite of the way coyotes sound, a pack usually consists of less than a dozen.

Some people say coyotes are varmints that should be wiped out, swearing that they seriously threaten deer herds and cattle. That’s just not true and anyway, exterminating them isn’t easy, since the number of pups in a litter increases as coyote population densities decrease. Instead of only five or six to a litter, Mom may produce and be able to care for as many as twelve. The surviving animals also get smarter. It has been said by one detractor that coyotes are “like roaches – you ain’t never gonna git ‘em all.”

A coyote’s diet consists mainly of small animals like mice, rats, rabbits, fish, frogs, and snakes. They also consume berries, corn and fruit from farm fields and orchards. Deer and cattle are usually only eaten after they have died from other causes, although newborn calves or those weakened by disease are sometimes killed and eaten by coyotes. 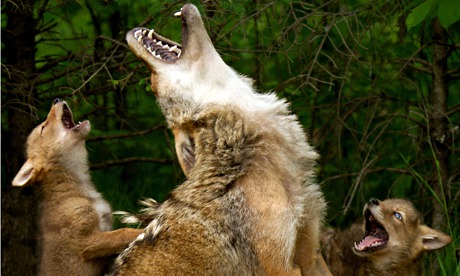 Photo by Debbie DiCarlo / Rex Features
Coyote pups learn early on to howl right along with their elders.

Found in virtually every state, even in towns and cities, adult coyotes average around twenty-five to thirty-five pounds, with a black-tipped tail carried low instead of straight or raised as most domestic dogs and wolves do. Coyotes breed during January and February, giving birth about nine weeks later to between two and twelve pups which stay with the mother at least until fall, but some remain as long as two years before relocating five to ten miles away. A few weeks ago, three coyote pups came into our backyard for a game of tag and a wrestling match.

Coyotes sometimes mate with domestic dogs, becoming coydogs. Be aware that coyotes also purposely lure dogs into the woods where Fido becomes dinner, as the lone decoy coyote is suddenly joined by six or more of his pack mates. Outdoor domestic cats are particularly at risk. Cats are coyote candy!

There is no record of coyote attacks on humans in East Texas. However, in Southern California, where I’ve seen coyotes sit on a city street and howl at a streetlight, and where some misguided people feed them, there have been attacks on joggers and small children. Like many wild animals when they become too familiar with humans, coyotes lose their natural fear, and a running person, particularly a small one, may be viewed as food.

In any case, Old Man Coyote’s call of the wild is definitely a part of nature’s symphony in the fields and forests of East Texas and frankly, I kind of enjoy their performances.