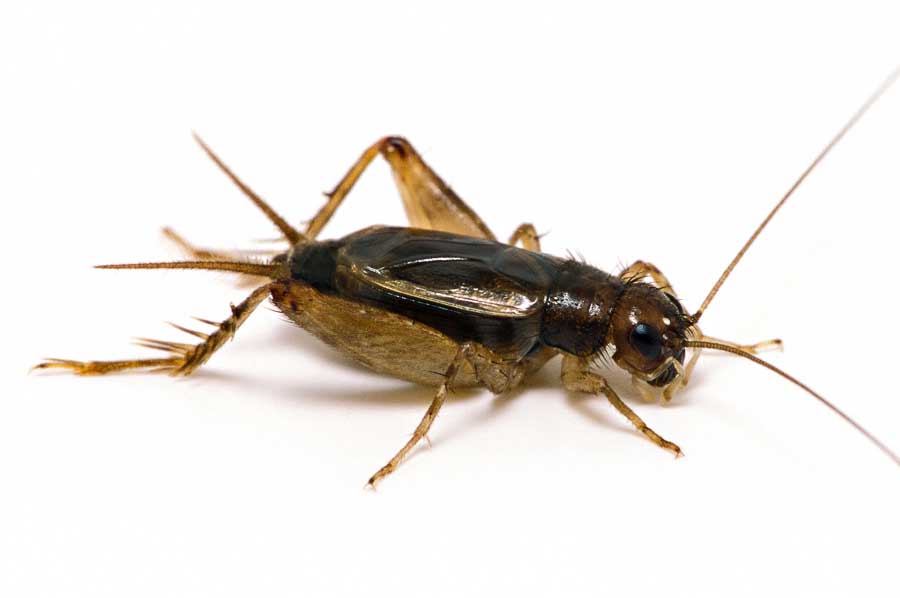 Photo courtesy of songsofinsects.com
Crickets are considered serious pests, pitted in fighting matches in the Orient, and even eaten by some folks.

Field crickets are normally outdoor dwellers, but they occasionally stumble around and get into houses. House crickets, on the other hand, are often raised and sold as fish bait. They can and do set up housekeeping in homes where they eat holes in a wide range of fabrics, including cotton and wool. Their diet is varied and they are not just vegetarians. They attack and eat other insects and even their own relatives. Cricket droppings can permanently stain drapes, furniture, and stored clothing.

For many people in North America, the incessant chirping of crickets drives them crazy. But in the Orient, crickets have long been considered good luck and their songs treasured as a pleasant melody. Vendors market them to customers who make their selection based on each little singer’s song.

Crickets are valued not just as musicians. “Watch-crickets” were often kept to warn of intruders. Unlike watchdogs, they don’t bark or attack prowlers, they just suddenly stop singing when disturbed, and the silence serves as a warning.

In China, Japan, and other Oriental countries, fighting crickets are highly prized. Unlike the many varieties kept for their pleasant music, these are smaller, generally from one particular province, and seldom over an inch long. Aficionados of cricket gladiators look for large heads, well developed jaws, and the right attitude. 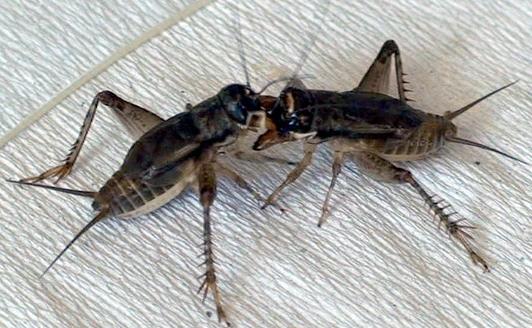 Photo from slanchreport.wordpress.com
Two crickets fighting in a match in the Orient.

Bian Wenhua and Yang Ping, two experts from Shanghai have written An Illustrated Guide to Crickets. In it they contend that there are three fighting styles used by these insect warriors: “creep like a tiger, fight like a snake,” “charges like the wind, valiantly forging straight ahead,” and “listen for sound, look for the enemy.” According to an article by Erik Eckholm in the Beijing Journal, matches set up by friends were once the rule, sometimes involving casual betting, but nowadays, serious gamblers have entered the picture and “hooligans” are dominating the sport. In October of each year, national cricket matches are held. An interesting article on these matches can be read at Daily Mail

Crickets in the Orient have been kept as pets for more than a thousand years, and there is evidence that the ancient Greeks also kept pet crickets. They’re small, don’t eat much – compare their food bill with that of a mastiff, Labrador retriever, cocker spaniel, or even a Chihuahua – and are unlikely to bite your neighbor or kill their cat. Elaborate cricket cages of bamboo, ivory, and exotic wood are used, even today, to provide housing for pet or fighting crickets.

Although Disney’s Jiminy Cricket was much more verbal than the average of his race and could carry on deep philosophical conversations with people and gifted wooden puppets, ordinary ones are much more limited. They have three types of “songs.” One attracts females, another woos ‘em, and a third warns off trespassers and competitive suitors. Their entire repertoire is produced by rubbing a rough part of one wing against a series of wrinkles on the other, a procedure that we all know can be quite loud.

Much has been written about cricket chirps. Since these little animals are cold-blooded, their body’s activity is controlled by air temperature. The cooler it gets, the slower they move and chirp. If you count the number of cricket chirps in 15 seconds and add 39, you’ll know the air temperature within a degree. For example, 31 chirps + 39 = 70 degrees Fahrenheit. Give it a try.

In Cambodia and many other countries, crickets are eaten. Although they are high in protein and fat, I’ve only tried them fried and wasn’t impressed. There are numerous web sites filled with preparation ideas. I’ll bet you can hardly wait to gather a few dozen to make cricket a l’orange, crickets in wine sauce and the like.

But, whether you listen to them, keep them for pets, fight them, eat them, or like my wife, just stomp them flat, crickets are still another interesting part of the environment that we share with myriads of living creatures.