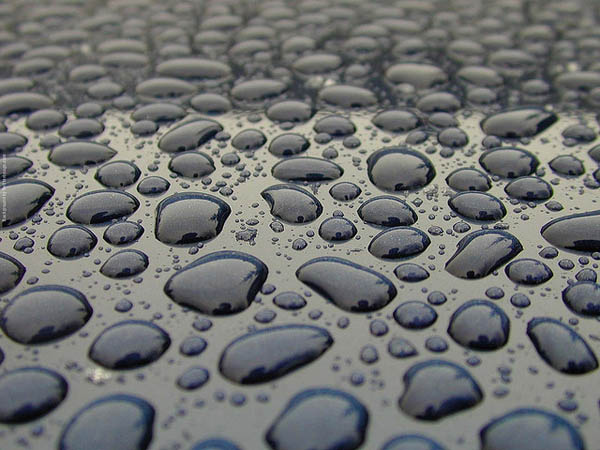 Photo courtesy of entertainmentmesh.com
Water magically collecting and beading on a freshly washed – and waxed – car.

I’ve recently come to a startling conclusion. I can cause water to form! All that’s necessary to trigger this amazing process is that I wash my car. And, I’m sure this isn’t just an isolated thing. Others do it too. Perhaps even you. Now – I am a scientific person, so I have investigated this phenomenon. A carefully controlled, scientific study involving a pretty good sample of a whole bunch of my friends has shown that car washing causes water to fall from the sky, or mysteriously form in little droplets on newly-washed vehicles. Teeny little drops sometimes develop on my car even when the sky is clear, and it’s this latter situation about which I want to finally get serious – maybe.

The moisture that forms on the car, even when it’s not raining is, of course, dew, and this is its story. Every day, about two to four hours after local noon, the air temperature starts to fall and humidity gradually rises. As the temperature drops, if there is enough moisture in the air, a time will come when the atmosphere can hold no more water and dew begins to condense on cool surfaces. As it turns out, it isn’t only automobiles upon which this apparently celestial coating distills, but also leaves, grass blades, rocks, roofs, and even the coats of animals. Ever pet a dewy dog? Ever smell a dewy dog? But, wet dogs are a story for another day. 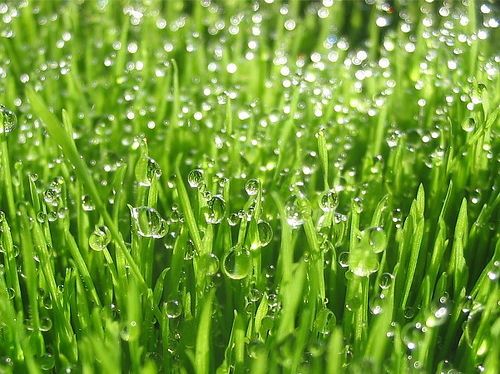 Photo courtesy of favimages.com
Grass covered in dew, just begging to soak your shoes when you walk across the lawn.

Under normal conditions, there is a lot of water in the air, but we can’t see it. From time to time, the vapor becomes visible, usually as clouds or fog, but often as dew. Warm air can hold more water vapor than cold air, so as the evening cools, a temperature is reached that the meteorologist on the evening news calls dewpoint – the point at which condensation occurs. When that happens throughout an air mass, clouds or fog form. However, for dew to form it isn’t necessary that the whole atmosphere be at dewpoint, only the surface the air touches. Especially on clear nights, without clouds to blanket and insulate our planet, the accumulated heat of the day rapidly radiates into the chill emptiness of space. It is not unusual for the difference between the high and low temperatures to be thirty degrees or more. Extremely high diurnal (daily) temperature swings are especially common in desert regions, where it can be blistering hot during the day and icy at night.

As the temperature falls, dew point rises and as the two come closer together, relative humidity climbs. Your local weather person may just say humidity, but they will also cite a percentage. For example, as I am writing this column, the air temperature is 73 degrees, the dewpoint is 70 degrees, and the relative humidity is 90%. In other words, the air is 90% saturated at this temperature. It is within 10% of having all the water vapor it can hold. My car has already reached dew point and is soaking wet, since its metal surfaces radiate heat quickly and are colder than the surrounding air. As the temperature continues to drop this evening, the relative humidity will likely reach 100% and fog will form, especially in low areas. One thing for sure is that grass mowing will have to wait until the sun tomorrow has dried the grass enough that it won’t clog the mower. That means it can wait until my son gets home in the afternoon. Saved by the dewpoint! 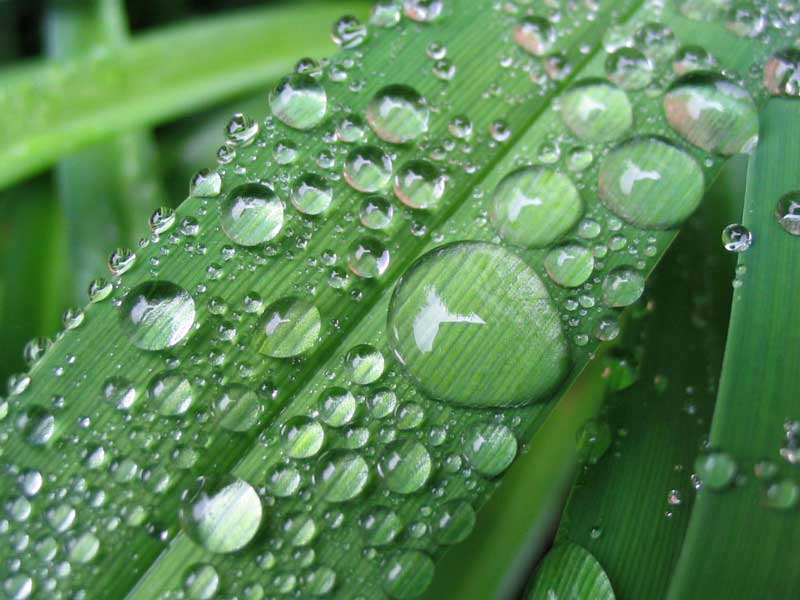 Photo courtesy of dreamicus.com
Dew collecting on leaves and then dripping to the ground is a very important source of life-giving moisture to many plants and animals.

Aside from dampening dogs, dew is very beneficial to plants and animals, and fog dripping from needles or broad leaves in some kinds of forests, can provide significant amounts of water as it soaks into the soil in place of rain. Some plants can absorb dew directly through their leaves. It is also important as a source of drinking water for small rodents, toads, lizards, salamanders, snakes, insects, and spiders. Its presence increases the humidity near the ground and allows animals with very thin skins to creep out from under logs and rocks where they’ve been escaping the deadly drying influence of sun and low humidity during the day. They then are safe to forage for a meal in what would have otherwise been a dangerously dehydrating environment. In outdoor survival emergencies, even humans can benefit from dew by mopping it from surfaces such as the top of a car or the wings of downed aircraft to use for drinking water. Dew is pure, distilled water, so it is safe to drink without purification, provided the surface on which it forms isn’t contaminated.

So, it’s not really me or you making things get wet, it’s just nature doing its thing with cold surfaces, including our cars. Whether for microclimate control, soil moisture, or drinking water for bugs, dew is vital to the continual functioning of our ecosystem. It’s another critical little cog in the complex world of the fields and forests of East Texas.