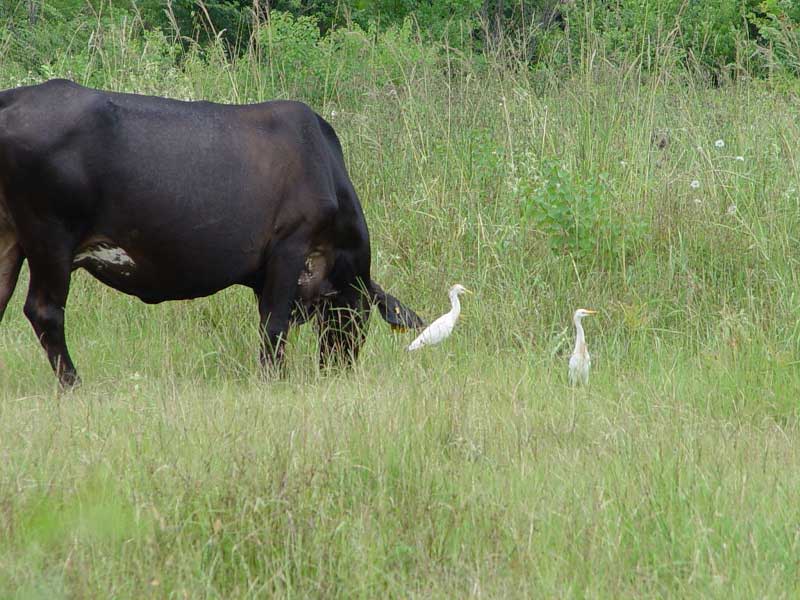 Cattle egrets seem to be everywhere livestock graze, and in greater numbers this year. Sometimes called cowbirds by local people in East Texas, these small herons have a strong affinity for cattle. As the cattle leisurely graze, the egrets follow along under their feet and virtually nose to nose with the bovine munchers. You might say they are sort of head to head with the herd! Occasionally, you’ll see a cattle egret just go along for the ride, perching on the back of a cow.

The whole idea of this interesting relationship is that the grazing cattle stir up grasshoppers, crickets, moths and other insects, as well as spiders and flies, and the egrets snatch them up. A nice arrangement. Scientists call this symbiosis – in which two organisms benefit each other. The cows aren’t interested in eating insects, and the egrets don’t chow down on grass. The egrets may reduce the numbers of biting flies around the cattle and eat parasites plaguing their hoofed companions. Still, the cows probably get the short end of things. The egrets get fed by just chilling out with their massive, but apparently unaware and unconcerned, benefactors.

Sometimes cattle egrets hang around airports catching insects that planes taxiing, landing, and taking off blow out of the grass. They could be a problem there if a bird is struck by a plane or is sucked into a jet’s engine. 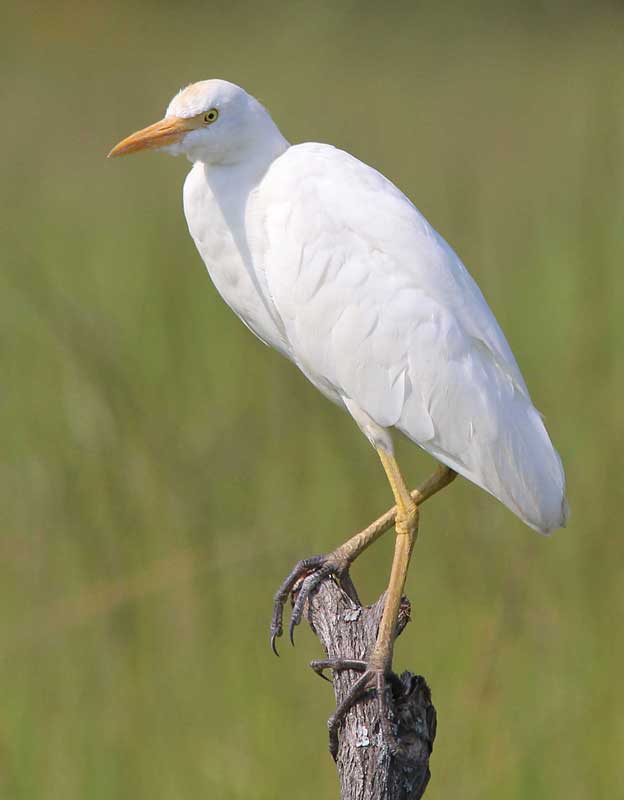 Photo from AtoZPictures.com
The yellow bill and legs are very noticeable in this photograph.

Gregarious birds, they are often found in flocks varying from a couple of dozen to hundreds, soaring from place to place and herd to herd. Often, in the morning and evening they are seen soaring around Nacogdoches and Lufkin, and even landing to feed on lawns. So if you’ve been seeing flocks of white birds gliding, swooping, and flapping in the sky this summer, it’s a good bet they’re cattle egrets.

Cattle egrets were not always found in the United States. Probably originating in Africa, they made their way to South America, the West Indies, and into Florida and other southern states. According to the Peterson Field Guide Birds of Texas, they arrived in Texas in 1955 and have been happily multiplying and spreading ever since.

Up close, and particularly during breeding season, they have some buff coloration on their head, breast, and back, with a yellow bill and legs. However, at any distance they generally look entirely white. When they are just standing around they hunch down and look stoop-shouldered. In the evening they can be found roosting in large flocks on tree branches.

Cattle egrets nest, often in groups, in bushes or trees using sticks for construction material to build a rather bulky nest. The males gather material and the female egrets do the building. Three to five eggs are laid and hatch in 24 days. In 14-21 days the chicks can leave the nest, climbing around in the trees, and are called “branchers.” Becoming increasingly independent, by 60 days they fly out into the world to forage entirely on their own.

All in all, these foreigners add a nice touch to the varied ecology of East Texas and much of the United States. Take a leisurely evening drive in the country and watch their antics as they strut around among the cattle.