It’s the right time of year, especially when the humidity is high, to see their tranquil flash – flash – flash scintillate through the fields and trees. Pastures and low areas, particularly along streams, sparkle each evening with their flickering lights. Down our country road in Nacogdoches, low-lying areas are often crowded with them. In Pennsylvania, Michigan, Iowa, and Illinois I’ve seen them almost completely cover corn fields and pastures with a sparkling undulating blanket. 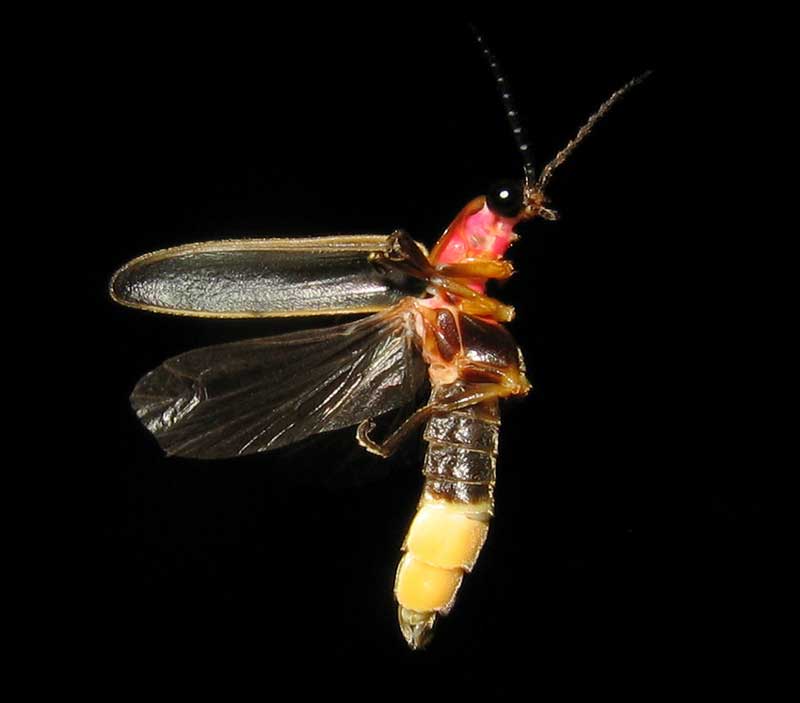 Photo by Art Farmer
The last segments of this lightning bug are its flashers. They produce cold light at about 96% efficiency. A fluorescent light bulb is only about 3% efficient, wasting 97% of its energy in heat.

Technically named fireflies, we called them lightning bugs when I was growing up, and most folks still do. We scooped them out of the air with our hands and put them in a jar where we could watch them twinkle. Boys being boys and brutal, we often pinched off their luminous tail segments and stuck them on our faces where they glowed for quite a time like little greenish-yellow demonic eyes.

Over 1100 species of fireflies live in tropic and temperate areas of the world, with about 125 kinds found in the United States. Not really flies at all, fireflies are beetles in the insect family Lampyridae. (To remember that, think of “lamp” plus “pyro” and you get “lampfire.”)

In North America fireflies are usually ½ to ¾ inches long, and the pattern of their rhythmic flashing varies with their species. They flash special messages to attract mates; a kind of insect Morse Code.

Males are the flight specialists. Females stay on the ground or on vegetation watching and waiting. Some fireflies send single, short flashes, others produce longer ones. A few flash twice, pause and then flash twice more. Still others send out three flashes in a row. The males and females chat a bit by trading flashes to assure they’re both the same species, and if the code and their attitudes match, they mate.

In tropical areas some fireflies flash in unison, hundreds at a time, with one “pacemaker” setting the tempo, making it look like a whole tree filled with hundreds of them is wired with tiny Christmas lights going on and off together. Others synchronize from tree to tree, first one tree, then the next and so on, causing waves of light to sweep across the forest.

After mating, the female lays tiny glowing eggs just under the surface of the soil that in two to four weeks hatch into tiny predaceous larvae called glowworms. Their diet consists mostly of small snails and worms. After a summer of eating, they spend the winter in small tunnels, changing into adults as the weather warms the next spring. 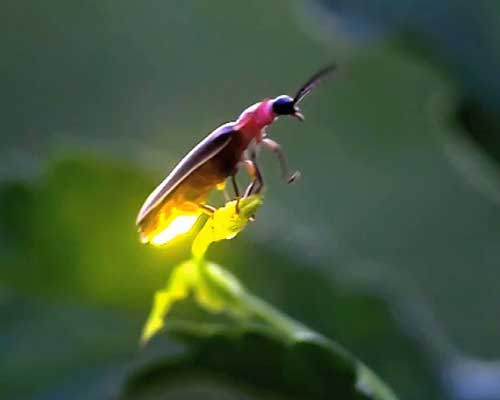 A firefly flashes when a chemical called luciferin (named after the Biblical Lucifer, the Angel of Light, who became Satan) in their light organs combines with oxygen in the presence of an enzyme called luciferase. The light produced has virtually no heat. Almost 99% efficient, it is “cold” light. An incandescent light bulb is only about 3% energy efficient, wasting 97% of its energy as heat. If fireflies operated that way, they’d probably fry themselves with their first love affair. An amorous Freddy Firefly would signal Freda Firefly and pop!! Midair explosion followed by a flaming crash!

Although scientists know how the light is produced, and even copy the chemistry in light sticks you can buy at carnivals and sporting goods stores and that the military use to outline combat landing zones, we really don’t fully understand how they control the “on” and “off” sequences so quickly. Fireflies probably don’t care much about how it works. They just do it.

To me, a glade scintillating with fireflies is a magical, mystical place, a peaceful domain of fairies, sprites, and gnomes sitting on toadstools.

Magical chemical lights they may be, but they are also little sparks of calm, leisurely drifting through the fields and forests. And with today’s hustle, bustle, anxiety, and frustration, we need all the tranquility we can get.