No, it’s not Halloween yet. But at least one denizen reminds me both that it’s fall and that next month’s scary creatures are just around the corner. 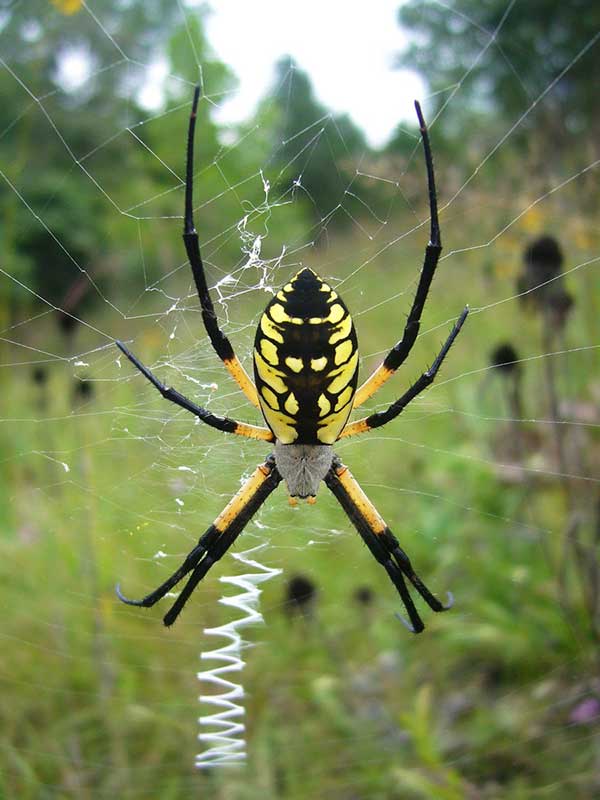 Photo credit: © Mangionej
A golden garden spider waiting for a meal. This spectacular and common spider is about 3 inches long, including the legs.

Argiope aurantia is it’s scientific name. I’m sure you’ve just been waiting to learn that! Argiope means silver-face and aurantia translates into gilded or golden. The front part of its body – the cephalothorax – is a milky white color. Anyway, I call them golden garden spiders.

This animal is large. The one illustrated here is almost three inches long including its legs. They spin a circular web about two feet in diameter with a thick white zig-zag pattern at its center upon which they sit waiting for a meal. That unusual part of the web is called a stabilimentum. Because it looks like a poorly written scrawl, one of the spider’s names is the writing spider. Some scientists think the stabilimentum is intended to strengthen or tighten the web, others say it is designed to attract insects. Nobody seems to know for sure.

Oddly enough, the golden garden spider eats the central part of its web at the end of the day and replaces it with a new network the next morning. Again, the reason is not known. Perhaps the web material contains chemicals that boost the spider’s web production capability.

These eight-legged predators have poor eyesight but are very sensitive to vibrations on the web as potential gourmet meals run into it and become stuck. If the snared insect doesn’t meet the resident spider’s meal requirements, she snips that part of the web out and the rejected victim falls to the ground.

Like all spiders, the golden garden spider can bite. They inject venom into their victim and wrap it in a silk cocoon-like sac for up to four hours too allow the venom to dissolve the prey’s internal parts. Then the spider drinks the resulting liquid meal.

Golden garden spiders can bite people, but only if you grab one. The bite is about like a bee sting. But a normally healthy person will quickly get over the effects of the bite. Benadryl cream will help minimize the pain and swelling.

For some reason, many people are very afraid of spiders in all shapes and sizes. Maybe it’s their association with death and evil that has something to do with it. I’ve seen normally calm and hard to ruffle people go wild when a spider crawls on them. For some people even the sight of one makes their skin crawl. Can your skin really crawl and if so where does it go? Never mind. That’s a story for my Halloween article next month.

I’m merely cautious around spiders and I don’t like them crawling on me. Some years ago while mowing the lawn I drove the riding mower into the large web of one of these golden spiders. The web and its resident draped across my face. Of course, I was completely calm but I nearly drove the mower into a tree while trying to pull it off!

The bottom line is that spiders are another interesting part of the tremendous variety of animal life that inhabits the outdoors and in some cases our homes. If you find one of these colorful gold and black spiders, take a close look. They are beautiful. Let them live.