After serving a church mission in Illinois from April through October 2013, we returned home to find devastation. Our lawns had been taken over by munch-mouthed interlopers. In spite of the efforts of our son and the cat, the lawns looked like the surface of the moon, covered with dozens and dozens of gopher mounds. 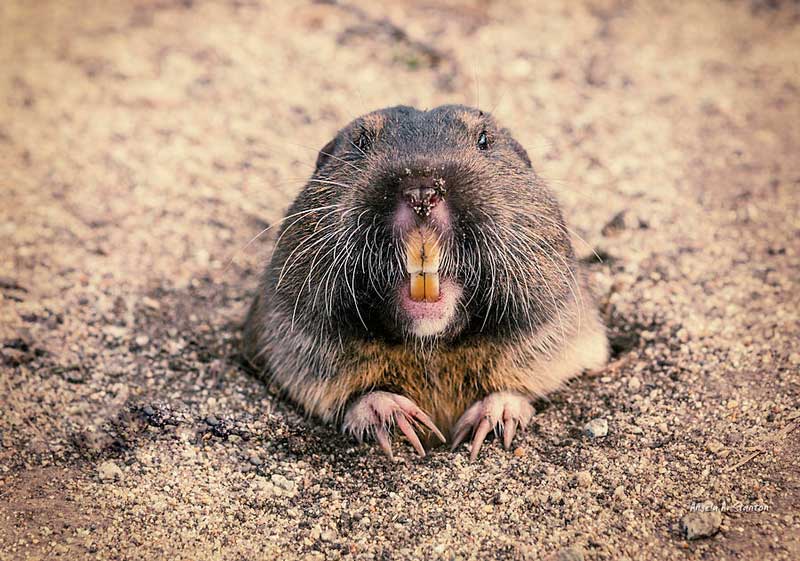 Photo by Angela A. Stanton
Gophers can be a real challenge for anyone trying to maintain a pristine lawn.

When we built our home years ago, we intended to establish beautiful lawns where children and chiggers would love to play. But I failed to take into account the French word gaufre. We corrupt the word and pronounce it "GO-fur” – those four-legged, fuzzy-faced, buck-toothed saboteurs that have literally honeycombed all our intended lawn areas. I’ve poisoned them, trapped them, shot them, and turned our dogs and cats loose on them. My normally kind and gentle wife, infuriated by watching them slurp down newly installed tomato plants right before her eyes, has been known to beat them to death or chop ‘em in half with a shovel! But, nothing seems to limit their population, and I know that muted chuckling sound I hear during the night is the little bandits laughing their heads off at us.

These pesky animals are officially called pocket gophers because of the large external, fur-lined cheek pouches they use for carrying food. The pouches aren’t noticeable unless you happen to see one waddling around with his face stuffed with something succulent from your garden.

If it’s a plant, it’s gopher food. They eat roots, bulbs, tubers, stems, and leaves. Garden vegetables, rose roots, numerous flowering plants, and even the roots of young fruit trees are all on their menu. Their buckteeth can chop off any plant useful to humans, and they are mounted so the owner can actually close their lips behind them. That’s real handy when you’re shuffling around in the dark underground and want to keep dirt out of your mouth. Gopher tunnels may be three feet deep and more than 200 feet long, with several offshoots for nests and food storage. A single gopher can make as many as 200 mounds a year. I believe it. Just come to our house and count ‘em.

Controlling gophers isn’t easy, but there are plenty of proposed methods. Strychnine or zinc phosphide-soaked peanuts, wheat, barley or other poisoned grain baits can be used. Strychnine is dangerous, tightly controlled and hard to get, but zinc phosphide baits are found at most garden supply stores. There are also anticoagulant baits containing chlorophacinone and diphasinone that cause the gopher to bleed to death internally. To use any of them, probe around with a metal rod 12-18 inches away from the mound until you locate the main tunnel. Carefully widen your access hole, put in the recommended amount of bait and cover up the hole so light and air can’t get in to give away your plan. But be careful. If pets eat the bait it will likely kill them.

To use traps, dig down to the main tunnel and place two traps in opposite directions in the main runway on either side of the hole you dug. Fasten the traps to a stake with wire or thin chain. If you’re not successful in a couple of days, move to a new location and set the traps again.

One article I read counseled that you can move a gopher without harming it by carefully lifting it by the tail. Oh yeah! That’ll be the day! It’ll probably bite heck out of you and then you can sweat out whether the snippy critter was rabid! And even if it doesn’t take a chunk out of you, what do you do with it after you have one dangling by its tail? Fling it into your neighbor’s yard? For my money, the little varmint will be a lot easier to handle after you’ve thoroughly dented his dome with a shovel! At any rate, good luck. I think we’re going to rename our place Gopher Haven.