Halloween is nearly here, and the fields and forests provide important actors in its production. 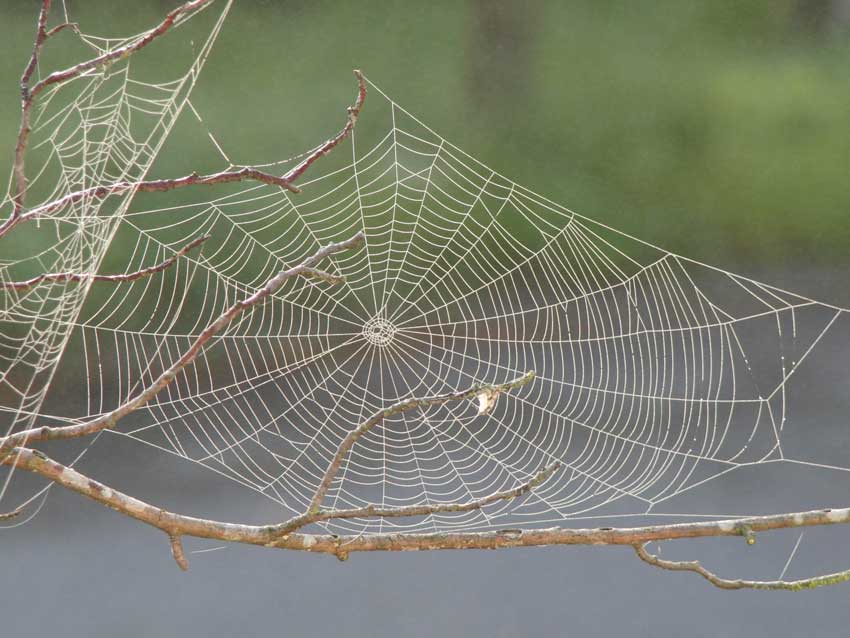 Ever notice that spiders seem to emerge just in time for Halloween? Little, medium, and huge, they run nimbly along webs of all shapes and sizes, waiting for a few last meals before Halloween’s chilling winds end their feasting. Why do so many of them have to spin their webs right across the trail where I happen to be walking – especially those little hard-shelled crab spiders with the spiny backs, and the gigantic orb weaving garden spiders that are so common in the fall? You’d think I’d learn to be more watchful, but no, I still come out of the woods festooned with gossamer webs, clawing them off and hoping their residents aren’t poised to journey down my neck.

Garden spiders, the most spectacular arachnids this time of the year, make webs that are up to four feet in diameter, suspended in areas where moths and other insects fly. Sticky beads dot the web, and when a hapless moth gets stuck in this trap, the spider runs quickly down to the struggling prey, injecting venom that kills the victim and dissolves its internal structures so the diner can drink it. (Heh! Heh! Heh!) As fall progresses, garden spiders fill a web sack the size of your thumb with hundreds of eggs and then, like the fabled Charlotte, die. In the spring, a mob of tiny newborn spiders will swarm out.

Halloween woods seem to be alive with owls. Walking through the woods one night, I saw the silhouette of a Great-horned owl sitting atop a telephone pole. I stood motionless, and so did he. I watched him, and he watched me. Then, stretching broad wings, he simply stepped off the pole and soared soundlessly straight at me. Believing firmly that I was a man and not a mouse, I stood my ground. His course didn’t deviate a degree. That blasted owl was headed straight for me! Determined that no durn flat-faced, rodent-eating bird was going to intimidate me, I didn’t move a muscle – until the last moment – when I suddenly realized I did have some mouse in me, and ducked. I chickened out, and I’m firmly convinced that huge owl with the big “ear” tufts, soared away laughing!

Great-horned owls are as large as some of our largest hawks – 18-25 inches tall, and wonderfully adapted for their jobs. Their huge, extremely light-sensitive eyes are mounted on the front of their head, making them look a little like a cat, and giving them excellent visual depth perception. Their hearing is quite sensitive and the slightest scurry attracts their attention. Their head can swivel almost all the way around, like it was slowly unscrewing. Their feet are powerful and armed with long, sharp claws. Finally, the wind over their wings is silenced by specially adapted fringe-edged feathers, fitting them perfectly for stealth flights. Besides, they look just plain spooky and at Halloween their deep resonant hooting calls strike fear into the hearts of both mice and men.


Bats in Your Belfry? 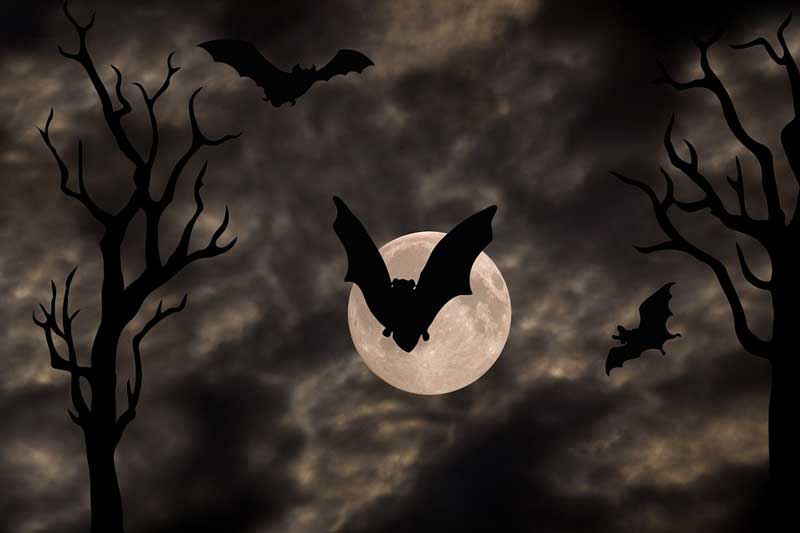 Completing the Halloween menageries are bats. Flapping, flitting, and beeping supersonic tracking pulses, they dodge and weave through Halloween’s fall forests. Mosquitoes, midges, gnats and other insect morsels better stay home. Bats are mammals – little flying mice – not featherless birds. They nurse their young with milk, and generally avoid contact with people. Yes, but what about vampire bats, you say? Don’t they (Shudder!) arise from dark coffins and fly off on evil, blood-sucking missions, especially at Halloween? Nope! There are vampire bats and they do drink blood, but they prefer cattle to people, and generally live in tropical areas farther south than East Texas. Sorry about that, Count Dracula, you just ain’t for real! Bats are great at insect control, so if you have bats in your belfry, don’t be scared, be grateful!

At the same time, bats sometimes carry rabies and according to federal health statistics, the majority of human cases of rabies in the United States are contracted from rabies-infected bats. Worse, rabid bats frequently show few if any symptoms, simply becoming lethargic. In this condition they are sometimes picked up by well-meaning people and bitten. The bottom line is, leave bats alone. Frankly, I discourage putting up bat houses because the increased number of bats in close proximity to people poses a very real disease threat. About ten days ago, a teenager in Wisconsin who had been bitten by a rabid bat, contracted rabies and is not expected to live. If you are bitten by a bat, get one in your house, or have handled a sick one, talk to your doctor immediately. Don’t take chances. There are only three recorded cases in the world of people surviving rabies once the symptoms develop. But, vaccine injected immediately after the bite can prevent the disease from developing.


Although there may have been evil traditions associated with Halloween, nowadays it’s mostly just a good time with costumes, ripe apples, sweet cider, donuts, crisp fall air, and hayrides through the fields and forests. It’s too bad that the innocence of youth has become polluted by adult phobias and political correctness. Too many grown-ups simply spoil what could otherwise be a great time. A glaring example is the fact that school officials in Puyallup, Washington, have canceled a traditional Halloween parade and other festivities, because according to an October 21, 2004 article in the Seattle Post-Intelligencer, they want to “avoid offending believers in the Wiccan religion.” Furthermore, the school leaders “want to stop losing instructional time” to the excitement surrounding the fun. Tsk! Tsk! Whatever we do, let’s not have any fun at school!

Come on folks, loosen up a little. Don’t get too serious! Just have fun. ‘Cause if you don’t, the demons, ghouls, and ghosts are gonna GIT YA!