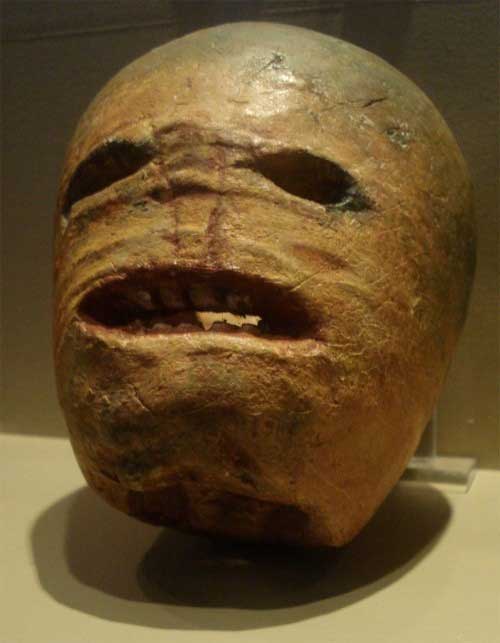 Wikipedia Commons
This frightening traditional Irish turnip (rutabaga) Jack’s Lantern resides in the Museum of Country Life in Ireland. It’s even scarier than our pumpkin Jack-o-lanterns.

Hooray! Recognized or celebrated in many countries on the 31st of October, Halloween is almost here. It’s one of my favorite holidays. But you’d hardly recognize it compared to its ancient origins.

Nowadays, its spooky, dark, and scary emphasis tends to obscure the fact that its roots are Christian. In the past, it went by the names of Allhalloween, All Hallows’ Eve, and All Saints’ Eve. In the dim past history, it began a three-day Allhallowtide, when the living remembered and honored those who had passed into that great beyond of death. Prayers were offered for the souls of the departed. On Halloween, it was believed the souls of the righteous dead came back to visit, and places of honor were set at the table or by the hearth to welcome them. During that period Saints and martyrs were remembered as well.

The end of summer and the time of harvest also figured into the increasingly complex traditions of Halloween. According to the ancient Celts, summer officially ended on the 31st of October, and they named the holiday Samhain, the Celtic New Year.

But things began to change. Instead of looking forward to the return of departed souls, people began to fear them. It was thought that the spirits of those who died during the preceding year came back to possess the bodies of the living. For protection, people dressed in strange and frightening costumes to discourage the evil spirits. Sound a little familiar?

Fear of the spirits of the dead is not limited to Western European beliefs. In Navajo tradition, the departed and evil part of the spirit of the dead, called their Chindi, leaving the body with its last breath, lingers around hogans in which death has occurred. Such dwellings are abandoned to avoid contact with this unharmonious and dangerous spirit. It was believed that Chindi could infect the living with ghost sickness. In order to further minimize this risk, the name of the deceased was never spoken aloud for fear that the Chindi might hear it and be attracted to the speaker. Every effort was made to allow death to occur outdoors rather than in a dwelling, to prevent the Chindi from occupying the dwelling.

As time went on, Halloween became more and more associated with the powers of darkness, such as demons, devils, witches, and other evil beings. In order to frighten away malevolent spirits, people dressed in frightening costumes and children went from door to door seeking treats to prevent them doing mischief. It was an old-time “trick or treat.”

As I’ve written before, Irish stories tell us the Jack-o-lantern originated when a drunkard named Jack tricked Satan into climbing a tree. Jack carved a cross into the tree trunk, making it impossible for the devil to climb down. After some intense bargaining, Jack promised never to trick him again and let him descend. When Jack died, St. Peter refused to allow him into heaven because of his dealings with evil, and the devil barred the door of hell as well since Jack had once tricked him. That left poor Jack to roam through the world in disembodied form forever. But Satan gave him a glowing ember from his many fires to light his way at night, placing it in a hollow turnip to make it last longer. As a result, the Irish originally used carved turnips with a candle in them as “Jack’s lanterns.” However, immigrants to the United States found that pumpkins worked better, and they have been used ever since.

Nowadays, spooky, glowing, candle-lit pumpkins, easier to carve than turnips, appear in windows and in front of homes after dark on Halloween. Even with carved smiles, they all seem to have a sinister appearance. A little imaginative sculpting with slits for eyes, downturned snarls and fangs and these Jack-o-lanterns make goosebumps rise on my arms.

This year Halloween’s moon will only be about 80% illuminated, and it won’t rise until 10:36 p.m. The full, glowing, orange “Great Pumpkin” rose out of the pumpkin patch four days ago on the evening of the 27th. Sorry about that Linus. You missed him again.

Still, the moon will be up the rest of the night, not setting until well after daylight. So there will be plenty of time for a flitting bat, owl, or witch to drift across its face and scare the willies out of you.

The fields and forests are full of spooky things, especially on Halloween!