Photo from www.hummingbirdfeeder.us
A male ruby-throated hummingbird with its ruby throat glowing brilliantly.

They’re baaaack! Ruby-throated hummingbirds, “hummers” for short, have been around since mid-March. To get here, many of them made a nonstop, 18 to 20-hour, 600-mile nonstop flight across the Gulf of Mexico from Central America where they had spent the winter. No, they didn’t fly Aero Mexico or United Airlines. Their marathon flight was done by virtue of their amazing wing-flapping ability. Actually, flapping is a poor word to use for a bird whose wingbeats give them their name. Hummers they truly are, and if you’ve been close to them you’ve heard their buzzy, humming sound. Flying straight and level hummingbird wings beat a furious 80 times a second!! In a power dive they may reach 200 times a second. Is it any wonder that about all we can see of their moving wings is a blur? Needless to say, their flight muscles use a tremendous amount of energy.

Weighing less than a penny, and only three to three and a half inches long, a hummingbird’s heart rate is a blazing 250 to 1260 beats per minute, or 4 to 21 beats per second, during their waking hours. A human heart beats 55 to 80 times a minute when not exercising, depending on your physical condition. In contrast, the life processes of sleeping hummingbirds drop sharply, and their pulse plummets to a mere 50 beats a minute. A comparable resting heart rate in a human would be only three beats per minute!

Do you love to snack? Hummers will put you to shame in a feeding contest. They eat about every 10 minutes, and although they feed mostly on plant nectar, their diet also includes very small insects and spiders. Red and orange flowers are their favorites and hummingbirds will investigate anything brightly colored. Possessed of a raging metabolism, hummingbirds require 7000 calories of food a day (about three times what people need), supplied mostly by drinking flower nectar through a two-section tongue they form into a tube. (Try rolling your tongue into a tube and slurping soda through it.) Ever see a fat hummingbird? If you exercised anything like you should, you wouldn’t be obese either. Like to snack? Sweat more.

If you want to feed hummers, many stores carry commercial mixes. But you might want to make your own by boiling four parts water to one part sugar – not honey. Boil for two minutes to kill bacteria and mold spores and let the mixture cool completely before filling the feeder. Refrigerate extra sugar water to keep it from spoiling. Food coloring and honey have both been reported to make hummers sick, so avoid using either.

A popular myth says that it is dangerous to feed hummers too late in the season. One late summer day I stopped at a local market to get more hummingbird nectar mix only to find that it was all gone. I was told they would not be stocking any more because “the season was about over and continuing to feed hummers late in the summer would delay their migration and endanger their survival.” Dr. Homer T. Russell, retired SFA Professor in Biology, reinforced my understanding that this is a misconception. It’s simply not true. 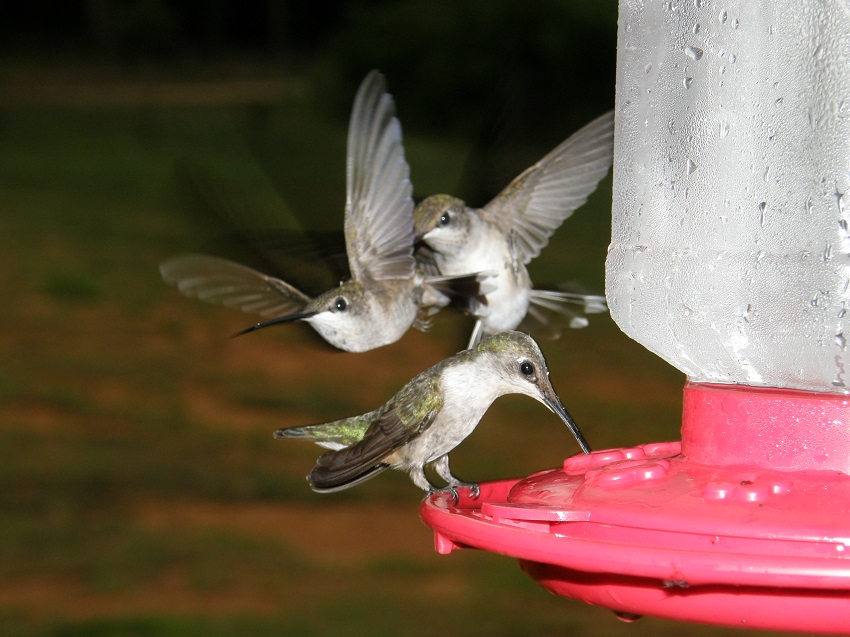 Photo by Laura Hathcock
Hummingbirds can become quite accustomed to your feeders.

Hummingbirds are prompted to migrate by day length, and there is absolutely no danger in feeding them too late in the season. Their internal biological clock, triggered by day length, will switch on their travel alarm and tell them when to head out. They won’t linger past their time just because you feed them. The real danger is cutting off your feeder too early when they are still not ready to migrate and have become dependent on you for sugary liquid energy.

Oh by the way, try saying aloud “snappy super snackers” three times as fast as you can. Tough huh? Ruby-throated hummingbirds are the only kind we have in East Texas. Hummers are one of nature’s most impressive gems. So, if you’re feeding them, remember to keep it up until the last one leaves for the winter, and continue to enjoy these speedy, spectacular fliers. We’re famous in Texas for feeding our house guests. Don’t send ‘em home hungry.