Fall colors have faded. Leaves have fallen. Orion is high in the eastern sky, and The Pleiades star cluster is almost overhead. 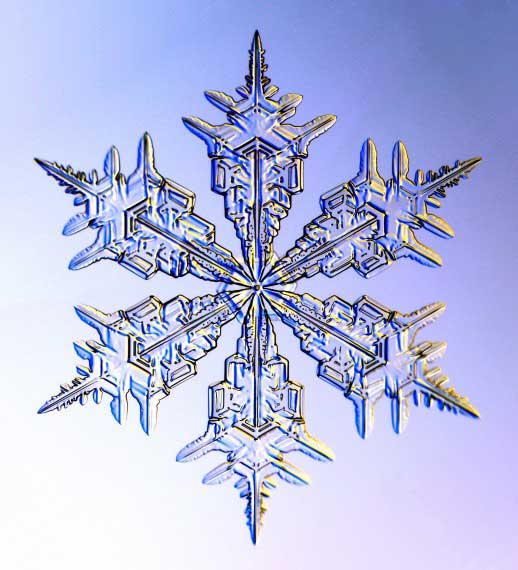 scijinks.jpl.nasa.gov
Stars are an important part of Christmas, and many snowflakes have a star theme. This enlarged flake is a great example.

On Christmas Night the moon will be full, rising in its glory at 6 PM, and by midnight it will be overhead. Even if it’s cloudy, Luna’s brilliant orb will lighten the darkness of the night. But here in East Texas there probably will be something missing &8211; snow.

Clement Moore wrote in “The Night Before Christmas” that “The moon on the breast of the new-fallen snow gave a luster of midday to objects below.” Having lived for many years in snow country I can attest to that fact. The fallen snowflakes on the ground sparkle with tiny diamond stars everywhere you look, and a marvelous silence fills the land.

Stars have always been an important part of the Christmas Season. Certainly the one that heralded the birth of Christ is paramount. Eternally curious, astronomers and theologians have long wondered what the Christmas star actually was, and even the date of its appearance has been questioned.

Shepherds would likely have been tending their sheep during a non-winter month, not December. Some authorities support the idea that Christ's birth was April 6th. Others said it was September 5th in the year 3 B.C. when Jupiter, king of the planets and a brilliant spectacle in the night sky, was in the constellation Leo The Lion, almost touching the Royal Star Regulus and a waxing moon. Jupiter would have been passing through a complex path called a retrograde loop, and would have appeared to move for a time, and then become stationary over Bethlehem.

Plants also play an important role in Christmas traditions. Ancient Druids gathered mistletoe with gold knives, and it was hung over doorways of homes for protection during the new year.

Kissing under mistletoe originated in ancient Rome. With each kiss a berry was plucked. When the berries were gone, so was the magic. To Scandinavians mistletoe was a plant of peace under which enemies could declare a truce, and angry spouses could reconcile.

Holly, in ancient days, was the sacred plant of the god Saturn, and part of the pagan Roman Saturnalia festival. It was also believed to protect against witches, and prevent homes from being struck by lightning.

Christmas trees have ties to the ancient Druids. And Martin Luther, the founder of Protestantism, walking through a forest on Christmas Eve, witnessed myriads of stars glimmering through evergreen branches. Deeply touched, he cut a tree for his family and, to simulate stars, placed candles on its branches.

Some say animals, domestic and wild, pause briefly in silent reverence on Christmas Eve. Even though I have never witnessed this hushed and reverent tribute, the child in me would like to believe it happens. In my heart it does, and I choose at this season to stop being a scientist, and instead allow the sparkling stars overhead, the holly, mistletoe, Christmas trees, and even the presents under the tree, to remind me of the birth of the Savior, and simply feel peace and tranquility.

My childhood reverie and nostalgic recollections of Christmas past still control my thoughts and emotions. I visualize those awe-struck shepherds, quietly watching their flocks by night in the hills near Bethlehem, as myriad angels suddenly surrounded them and announced a message that would change the history of the world.

“Fear not: for, behold, I bring you good tidings of great joy, which shall be to all people. For unto you is born this day in the city of David a Saviour, which is Christ the Lord... And suddenly there was with the angel a multitude of the heavenly host praising God, and saying, Glory to God in the highest and on earth peace, good will toward men.”

“That’s what Christmas is all about, Charlie Brown,” concludes Linus.

Linus is right. May this season bring you happiness, a spiritual rejuvenation, and a desire to be a better person. And maybe you’ll get a quick kiss under the mistletoe, too. Merry Christmas!