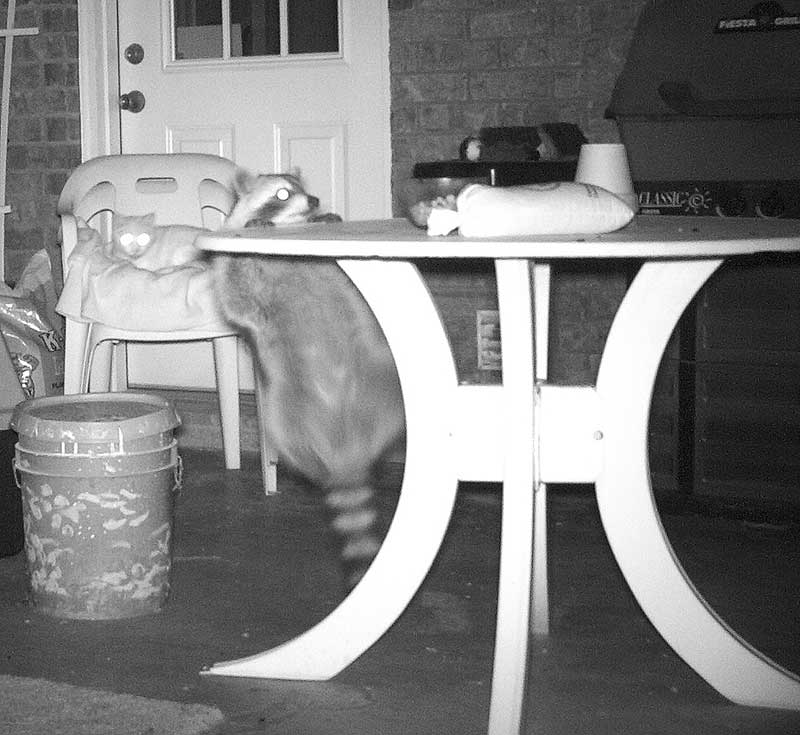 Photo by Paul Risk
Whoops, slipped! A raccoon caught on my game camera unsuccessfully trying to get at a seed bag on the table. Our cat in the chair couldn’t care less.

Is your neighborhood feeling more crowded than it used to? When something goes bump in the night do you hear “it” scuttle off into the darkness when you open the door? When you shine a flashlight around your yard at night do you see eyes looking back? Remember, before your neighborhood developed, wild animals were there. They’re moving back and some are a real pain in the neck.

Weighing up to 300 pounds, with upward and downward-facing tusks, these animal wrecking crews are creating havoc in many towns and cities. In Nacogdoches, they plow up lawns and destroy flower beds, leaving a trail of destruction six inches or more deep. In Texas, there are approximately 2.6 million of them and more coming, with no relief in sight.

Years ago you had to be out in the country to hear coyotes howl or see them trotting along looking for a meal. Not anymore. They often meander across our backyard showing a smug disinterest in our presence. And they have a taste for domestic cats and dogs. Sometimes they mate with dogs; their offspring are called coydogs. Coyotes are so citified that they even show up regularly in downtown Chicago. And they have been known to attack small children and joggers.

Sounds impossible, doesn’t it? It isn’t. One woman in Nacogdoches has a cougar that leaps over her back fence, stretches out and takes a sunbath from time to time. I guess I don’t have to say that cougars, also called mountain lions or pumas, would not pass up a meal of kitty cat or a poochie snack. Some years ago in California, a rider on a bicycle path was snatched off their cycle by a cougar and mauled.

Yep, city beavers. A few years ago one wandered into a house under construction at the edge of town, and another took a dip in a swimming pool in the Waterford housing development. Waterford is a very upscale area, so I assume the beaver was just trying to see how far he could push the neighbor's acceptance. A beaver house of sticks and twigs definitely wouldn’t fit in with the folks of Waterford.

Even ‘gators manage to find their way into our cities. It’s estimated there are up to 500,000 alligators in Texas. Found mostly around bayous, creeks, and swamps, they sometimes show up in town too. Lake Nacogdoches has its share. Last year a man in Orange County Texas was killed by an alligator after ignoring a “no swimming – alligators” sign at a fishing area.

These masked bandits have long made towns part of their habitat. Rifling through trash cans and eating pet food left outside, they can be real pests. Raccoons will eat almost anything. Their hand-like front paws enable them to open most containers. I have to tightly batten down the hatches to keep them out of the sunflower seed I store on the porch for bird feeders. Agile climbers, they sometimes even get into attics, where they have been known to raise their young.

Pointy-nosed and bare-tailed, possums seem unworried as they make their way across a yard or down a street. When they are frightened they sometimes pretend to be dead. But on roads, it doesn’t work well. Flat possums are common there.

It once was rare to see a skunk in town, but not anymore. These furry black and white mammals with a characteristic waddle love garbage, and it isn’t a good idea to get them stirred up. If they point their rear end at you and raise their tail you could be in for a really fragrant encounter.

There are many other animals that have become adapted to living in the city, and the main reason is that they can find plenty to eat. Keep your garbage cans firmly latched. Don’t leave pet food, grain, or seed outside. Cut off the food supply and you probably won’t have so many moochers drifting in from the fields and forests.