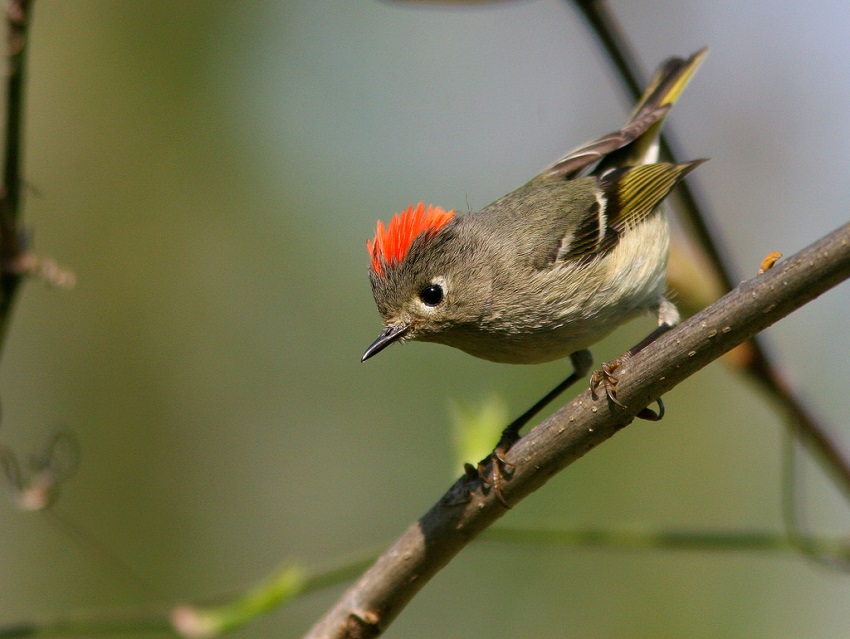 Photo by Kenneth Cole Schneider
Ruby-crowned kinglets are frequently seen only as a brief flicker of feathers as they rapidly hop and flit from twig to twig.

At first my wife thought the tiny, furiously-fanning fliers were hummingbirds. Only about three and a half inches long, it was much smaller than a nuthatch and flitted franticly through our Azaleas outside the window. These tiny, nervous avians zipped from twig to twig with wings almost a blur. Apparently a pair, one of them sported a small flame-red patch on the top of its head. The red flash appeared and disappeared apparently depending on the bird’s mood. Sometimes it was invisible. It was the first time we had ever seen a ruby-crowned kinglet in the many years we have lived in our house surrounded by forests. Perhaps this viewing was a Thanksgiving present to my sharp-eyed wife.

A check of our bird books and the Web soon enabled us to identify them as ruby-crowned kinglets. It appears that the birds were attracted by a small stained glass panel hanging at one of our window panes. And then they were gone. But not for long. They came for about 4 days off and on, but we haven’t seen them recently. The Azaleas have no flowers this time of the year, so they couldn’t be the drawing card. We have a sunflower seed bird feeder but that didn’t seem of interest to them.

These little birds are olive-green in color with white around their eye and a white wing bar. The female we saw was quite yellowish-green. Their bill is narrow and sharp-pointed. With their wings constantly flicking and the habit of never being still makes it very hard to get a good look at them. The red patch on the top of their head is not always visible. The tiny feathers of their crown can be raised or lowered at will to display or hide the red area.

In our area these birds are winter residents, but in summer they are in the northern part of the country and in western mountain areas where they breed. Amazingly, these tiny birds lay up to 12 eggs at a time, in a nest 4 inches wide and 6 inches long, in protected areas high in trees. Only one brood a year is produced. According to the Cornell Lab of Ornithology the eggs are only about ½ an inch long and hatch in 12-14 days. The young are born without feathers or down, and are entirely reliant on their parents for sustenance.

Cornell also reports that these birds eat spiders and a wide variety of insects, including aphids, wasps, ants, and bark beetles. They also feed on a few varieties of seeds and fruit, including, oddly enough, poison-oak berries. However, the latter are not recommended for human consumption. As is often the case, wildlife can eat some food that would be a serious “no-no” for humans. It’s a myth that a human survivor can watch wildlife to determine what is safe to eat in an emergency. Another good example of this is squirrels eating mushrooms that are deadly to humans.

A good way to spot these flighty animals is to locate shrubs where other small birds are feeding and settle down and wait. They are not all that uncommon, but with their rapid flight behavior they may flick rapidly through your field of view too rapidly to identify them.

Patience is the key to seeing these striking birds. As to photographing them I can only wish you luck. Trying to get a “snapshot” is probably out of the question. They don’t pose long enough before their next dash.

These intriguing avians are another reason we need to spend more time observing nature in our fields and forests. People today are far too keyed to a rapid life style, short of patience, and glued to a cell phone or tablet. Slow down, enrich your life and enlarge your experiences in the outdoors.