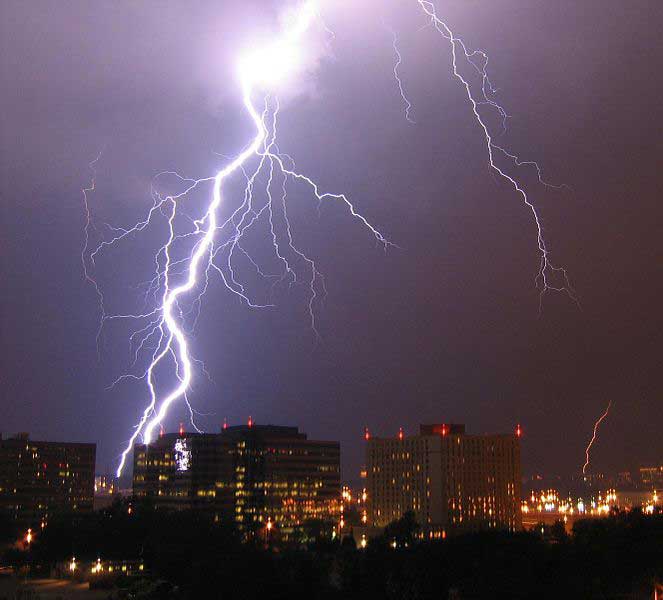 Wikipedia Commons
Forked lightning, one of the most common displays, flashes during a thunderstorm over an urban area. Lightning is beautiful but extremely dangerous. July 24-29 is National Lightning Safety Week.

This is lightning season and July 24-29 is National Lightning Safety Week. We rightfully regard lightning with awe and fear. Exciting and fun to watch, lightning is one of nature’s most powerful, uncontrollable and dangerous phenomena. In the United States, it kills about 100 people every year.

Sunday, July 15, 2012, two soccer players in Houston were killed and a third man hospitalized by a bolt of lightning that struck a tree under which they had taken shelter.

Lightning is a huge spark of electricity that can leap as far as five miles from a cloud to the ground or from cloud to cloud. The bolt’s tremendous surge travels between 60,000 and 90,000 miles per second, instantly heating the air to as much as 50,000 degrees Fahrenheit (three times hotter than the sun’s surface) and compressing it into a shock wave that races outward at 1100 feet per second. The arrival of the shock waves are what we hear as thunder. Count the seconds between the flash and the boom to determine how far you are from the strike. For example, 5 seconds equals 5500 feet, or just over a mile.

The average lightning bolt lasts only 1/10,000 of a second but it packs energy as high as 150 million volts at 125,000 amps. That’s enough electricity to run a 100-watt light bulb for three months! Current higher than 20 thousandths of an amp passing through the body can stop your heart!

A lightning bolt is caused when negative electrical charges form in clouds and positive charges develop on the ground or in other clouds. When these opposing charge differences become great enough, a negative “stepped leader” starts down from the cloud and a positive ionized path moves up from the ground. They meet and in the tiniest fraction of a second, the main change jumps from the ground up and is what we see as the lightning flash. Sometimes ten or twelve discharges flicker rapidly along the initial strike path.

At the first sign of a thunderstorm you should:

Photo from www.whiteblaze.net
If you can't get to safety in the outdoors, crouch on the balls of your feet and cover your ears.

Usually, lightning appears as straight, jagged, or forked bolts, but there other forms, too.

Ball lightning is rare and poorly understood. Varying from the size of an orange to larger than a basketball, it may drift slowly down from a cloud, tree or pole after a lightning strike, roll along the ground, or as in one reported case, drift through an open door. Some have come down chimneys and through window screens. Lasting only three to five seconds, these balls emit a sizzling sound and the smell of hot metal or ozone, then either silently disappear or collapse with a loud bang.