According to the Purple Martin Conservation Association, purple martins have been around for at least 12,000 years. Before human beings appeared in the New World, they probably nested in abandoned woodpecker cavities or other openings in dead trees and cliffs. Today, east of the Rocky Mountains, martins only nest in the houses people make for them. 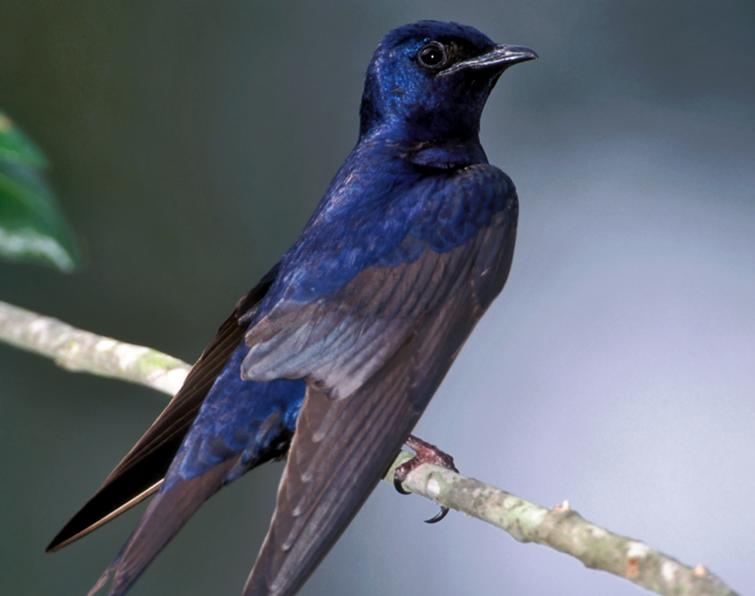 Photo from farmersassociation.com
Purple martins are our largest swallow and the only martin in North America.

Long before settlers came, Native Americans hung long-necked gourds with a hole in the side as nests for martins. The birds may have helped chase crows away from crops. Since they give alarm calls when predators or strangers come around, they may even have been primitive alarm systems. In any case, they undoubtedly provided pleasant company and a primitive calendar since their arrival and life cycle are tied precisely to seasonal changes and exact time limits. When colonists arrived in the New World, they too found purple martins easy to attract, and followed the Indian practice of hanging gourds for them, something that is still carried on by many people in Texas.

Purple martins are our largest swallow and the only martin in North America. About 8 inches long, they have a wingspread of almost 16 inches. Often returning season after season to the same site, purple martins often live seven or eight years. Interestingly, it takes these birds more than one season to develop their adult plumage. Early in its life a martin's breast is mostly white with a sprinkling of purple feathers, but by their third season they are entirely a deep purple.

Spending their winters in South America, purple martins begin showing up in Texas during January, and enthusiasts begin putting up elaborate condominiums to attract them. Females make a messy nest of grass and twigs stuck together with mud, a process that takes 3-4 weeks. They usually lay 4-6 pure white eggs and incubate them for 15-17 days. As soon as the young hatch, adults are kept busy scouring the area for insects to feed their offspring. Favorite meals include dragonflies and cicadas. If you’ve ever watched a dragonfly in flight, you have some idea of the aerobatics a martin must go through to catch them. Young birds are fed on the basis of survival of the fittest. Weaker birds that won’t fight their way to the door of the nest often die. About a month after hatching, the young martins are ready to fly. Several weeks of flight training follows to prepare them for their long migration back to South America. Perhaps they also take Spanish lessons. Maybe not - but it couldn’t hurt!

As with most wild creatures, life isn’t easy for these birds. Purple martins are preyed upon by owls, hawks, crows, snakes, raccoons, possums, and squirrels. Even their housing isn’t assured since starlings and sparrows compete with them for living quarters.

Now brace yourself. Martins don’t control mosquitoes! However, folklore would have us believe they do. I’ve read that a purple martin can eat 2,000 mosquitoes a day. Well, I suppose they are capable of doing it, but the truth is - they don’t. Even if they did, a house full of martins munching only 2,000 mosquitoes a day wouldn’t put much of a dent in the mosquito population. In fact, martins actually don’t even like mosquitoes. They compose only a very small percentage of their diet. Apparently if a slow-flying mosquito blunders into their path, they will grab it, but it’s a rare thing. 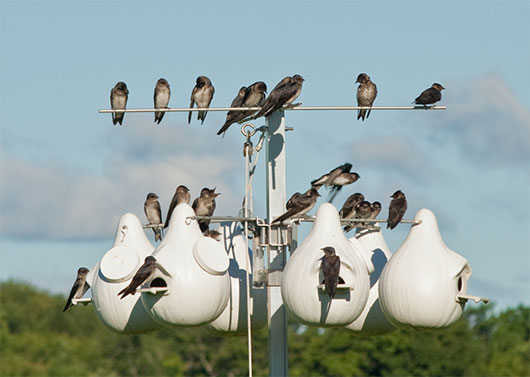 Photo courtesy of Purple Martin Conservation Association
Purple martins are colonial nesters — they like to nest in groups.

There are several reasons martins don’t impact mosquito populations. First of all martins are just going to sleep when mosquitoes are getting out of bed. Second, mosquitoes are in short supply during the day and even when they are around, they tend to stay close to the ground in locations not frequented by martins. Incidentally, martins do most of their foraging more than a mile from their nest sites, so even if they were eating mosquitoes, they would be eating someone else’s, not yours. In any case, if you were a martin would you rather play aerial dogfight with teeny tiny mosquito micro-snacks, or go after a fat cicada or a big honking dragonfly? The difference is similar to choosing between hummingbirds or beef steaks for supper tonight.

If the only reason you put up your martin house was to control mosquitoes, let me give you another suggestion. Put up bat boxes instead. Bats really enjoy mosquitoes and eat huge quantities of them. They also work the night shift when mosquitoes are out. Then you can start worrying about bat-carried rabies instead of dengue or encephalitis-carrying mosquitoes.

Why we think we have to find economic reasons to give value to wildlife is beyond me. Forget about whether martins earn their keep. If you like purple martins, go ahead and put up an apartment for them, then sit back and enjoy their antics. They are another part of the rich natural heritage we have here in the fields and forest of East Texas.