From earliest times, a blend of folklore, religion, science, and superstition has produced stories about scary creatures living in forests. From antiquity comes the tale of the archangel Lucifer’s expulsion from heaven. As punishment for contesting and rebelling against God’s plans for the earth’s inhabitants, Lucifer and a third of the hosts of heaven were cast out. Afterwards known as Satan, The Devil, Beelzebub and other names, he and his followers fell to the earth, exclusively in the dark woods. There he lurked with his hordes of demons, satyrs and other evil creatures, creating havoc, terror, and bloodshed. 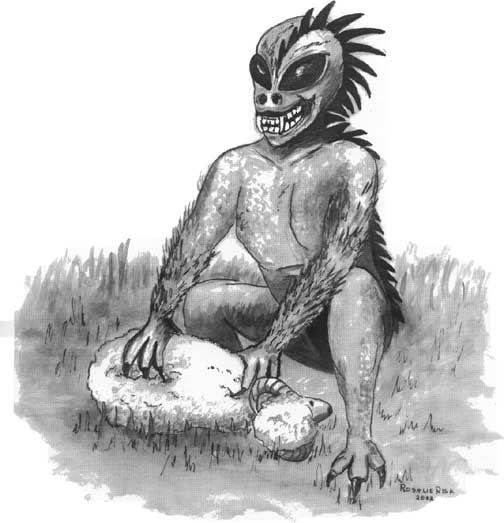 Artwork by Rosalie Risk
This is a composite rendering from a wide variety of reports and photos of supposed chupacabras.

Other creatures – half human, half animal – were believed to dwell in the forests, and European woodcutters carefully avoided an overnight stay in this domain of devils. Pan, with the legs, ears, and tail of a goat and the body of a man, was also believed to roam wilderness areas. A music lover who played pipes, he was also bent on rape and other violence. Frightened travelers hearing sounds in the woods they interpreted as Pan’s approach, sometimes developed the blinding, irrational fear we now call panic.

Chupacabras (chew-pah-CAHB-rahs) are said to be 4 to 5 feet tall, with reptilian features, very large, red eyes, fangs, gray skin, and sharp quills in a line down their spine. Some say they have wings, others say no, but all believers affirm they attack animals – often goats – and suck out their blood, leaving only their shrunken bodies behind.

A man in Tucson, Arizona remembers as a small child, hearing the outhouse door squeaking, and was horrified to see a tall, big-eyed creature standing in the doorway. (Presumably Chupacabras are toilet trained.)

A veterinarian near Zapotal, Mexico, examining two sheep supposedly killed by a Chupacabra found only puncture wounds in their necks. Never before had he seen anything like these injuries and guessed that some type of vampire might be to blame.

A young woman from Alfonso Calderon in northern Sinaloa State, Mexico, displaying tooth marks on her neck, said she had been attacked by a “beast with big horns.” The state government there sent a team of 15 scientists escorted by 50 policemen to investigate the reports and try to trap some of the beasts. They caught only dogs.

Chupacabras have been reported in San Antonio, Miami, New York City, New Jersey, San Francisco, and Moscow, Russia! There are Chupacabra Web sites, and in the Texas border town of Zapata, a day-long Chupacabra Festival is held, featuring a chupacabra chili cook-off and Cabrito, a Mexican delicacy – cooked baby goat.

Throughout most of the United States, these and similar apparitions go by the name of Skunk Ape in Florida, Wookie in Louisiana (before Star Wars!), and Sasquatch in the Pacific Northwest. In Arkansas and Texas they are sometimes called the Fouke Monster, from a sighting near Fouke, Arkansas. Other names include Turkey Creek Monster, Big Cypress Swamp Monster, Caddo Critter, and Sabine Monster. According to the Bigfoot Field Research Organization (BFRO), only Connecticut, Delaware, Hawaii, and Rhode Island are Bigfoot-free. In Texas they’ve been reported in 15 counties, including sightings near Kilgore, in the Big Thicket near Livingston, the Sam Houston National Forest, and south of Texarkana.

Said to be 6 1/2 to 12 feet or more in height, they leave 18 to 25-inch tracks with 3 or 5 toes. Most of their body is covered with thick brown hair, but their face and palms are hairless. With arms hanging almost to their knees, they are said to walk with a rolling gait, leaving behind the permeating odor of a skunk or dead animal. (With the exception of the aroma, I think I’ve seen critters like that driving pickup trucks here in East Texas. I just wasn’t close enough to verify the smell.) 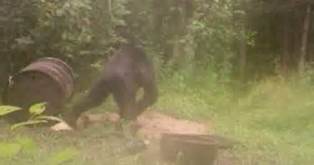 Photo from Twitter @CryptoSightings
A photo “clearly” showing Bigfoot preparing to toss some barrels around.

Encounters with Bigfoot have generally been peaceful, but they’ve pounded on travel trailers and cars and left hand prints on windows. Mostly they are just seen scuttling off into the trees, sometimes emitting piercing screams, and occasionally throwing full 55-gallon drums of gasoline. In one instance a 300-gallon fuel tank was lifted off an elevated stand and smashed.

Are any of these stories real? Well, ya’ never know. Next time you picnic, take a close look around before you settle down for a nice fried chicken-stuffed nap. And, if you’re camping, listen carefully for snuffling and scraping sounds around your tent just before you drift off to - - - - - - - - - sleep?