As the sun goes down in East Texas, activity in our forests picks up. Animals that have been sleeping during the daylight hours awaken and begin their nocturnal activities. Coyotes and bobcats, flying squirrels and raccoons, night hawks and owls, to name just a few, leave their daytime dens and perches and begin looking for food. In darkness that would cause us to blunder into trees, these animals move unerringly in their quest for a meal. How do they do that? 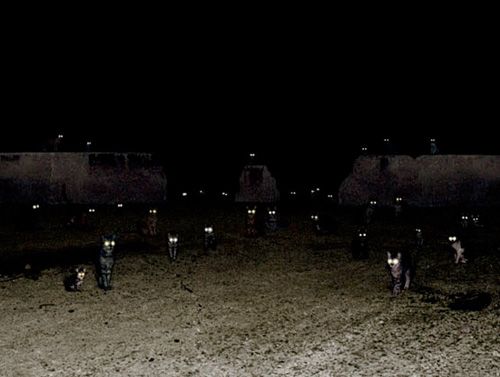 Photo from iwastesomuchtime.com
The gleaming eyes of a herd of feral cats stare back into the light shined on them after dark.

Nocturnal animals’ eyes are specially constructed to allow them to see under reduced light conditions. First, the iris in their eyes opens much wider than ours, permitting more light to enter and reach the light sensitive cells of the retina. Second, they have more dim-light receptor cells in their eyes than humans do, and third, their eyes have a reflective, light-intensifying layer at the back called a tapetum. Have you ever shined a flashlight into the woods at night and been shocked to see gleaming eyes? That’s the light reflecting off the tapetum. Depending on the animal, the reflected color is yellow, gold, orange, red or green.

Human eyes don’t have a tapetum, but you improve your night seeing ability by looking slightly to the side of things at night, although you’ll see them only in shades of black and white. Called averted vision, this technique forces the image reaching your retina to shift from daylight color sensitive cone cells to dim-light non-color receptors called rod cells. Give your eyes time to adapt. A chemical called visual purple in the rod cells that’s bleached out in bright light has to increase. It takes 20-40 minutes for the rod cells to reach peak sensitivity and maximize your ability to see in the dark. Adequate vitamin A is necessary for visual purple production. Vitamin A deficiency interferes with night vision. 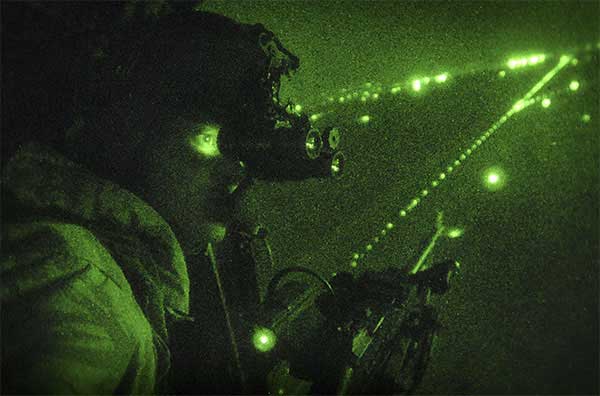 Night vision image intensifiers are available to allow us to see in the dark, but they cost hundreds to several thousand dollars. They electronically enhance starlight, moonlight, and other ambient light and are used by the police, U.S. Border Patrol, and the military to capture or take down the “bad guys.” Some telescopic ones mount on sniper rifles, and flip-down devices can be mounted on military helmets. There are also hand-held binocular and monocular versions. Heat sensing optics are even more advanced and provide an image by sensing the temperature differences of objects in view. The images of all these devices are in shades of green and black.

Since mammals can’t see infrared (IR) light, early military sniper scopes used IR light sources with a special view screen that fluoresced in IR. A major problem with them was that the IR light source looked like a floodlight to other snipers with similar equipment. Not a good thing when you’re trying to be unseen. Some motion sensing game cameras use IR LED flashes to take pictures in total darkness. The images are black and white, but since it’s invisible to them, the IR flash doesn’t startle animals.

So, if you’re out at night remember to look off center and give your eyes time to adjust to the darkness. If you must have more light, use a flashlight with a red lens. White light temporarily ruins your night vision. Red light will not. Also, most animals can’t see red light so you won’t frighten them away as you prowl the night.

Finally, don’t be overly afraid in the dark night woods. Most animals out there, including snakes, are doing everything they can to avoid you. Just move slowly to give them time to get out of your way. The night is a fascinating time in the fields and forests. Take a night nature walk and see what I mean.