Spreading like wildfire in marshlands across the country, the nutria also called nutria rat, coypu, coypu rat or swamp beaver, is a rodent with the scientific name Myocastor coypus. Myocastor translated into English is mouse-beaver.

Introduced into the United States from Argentina in 1937, nutria are brown and furry with long, scaly tails, webbed hind feet, white muzzles and chins and large, orange, protruding front teeth. They look sort of like a round-tailed beaver with bad dental hygiene. 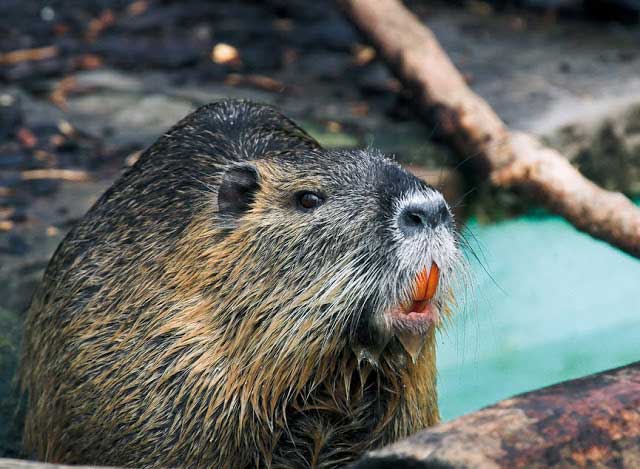 Photo courtesy of king-animal.blogspot.com
Nutria, a swamp dwelling rodent with soft brown fur and protruding orange teeth, are overrunning and damaging huge areas of wetland in the U.S. Trapped for their fur, some people also eat them.

Semi-aquatic, mostly nocturnal and growing as large as 25 or 30 pounds, these rodents apparently spread from the Avery Island Nature Preserve in Louisiana during a hurricane and within five years were found in most of the southern parts of that state. Nutria are now munching their way across large areas of Maryland, Louisiana, and Texas. At least nineteen other states are home to them, including Washington, Montana, Michigan, Indiana, and Indiana.

Nutria eat a wide variety of marsh plants, driving out native muskrats and other animals and changing the complex environment of the marsh in devastating ways. In Maryland’s Blackwater National Wildlife Refuge, nutria have converted 7,000 acres of marsh to open water by eating the native vegetation. According to Randy Showstack in a news release from the Environmental News Service, they are decimating as many as 500 acres of refuge wetlands a year.

Able to eat up to 25% of their body weight in plants per day, the term “motor mouth” takes on an entirely new and frightening meaning. That’s like a 180-pound human eating 45 pounds of food every 24 hours. Showstack says ecosystem changes are threatening endangered species such as the bald eagle, Delmarva fox squirrel, peregrine falcon, and red-cockaded woodpeckers. Robert Colona, a project manager for the Maryland Department of Natural Resources, calls the 50,000 to 100,000 nutria in the refuge “furry cockroaches” because of the difficulty in controlling them. In Louisiana the estimated number of nutria is in the millions, and estimates are similar in East Texas.

The Louisiana Deptartment of Wildlife and Fisheries has a control program aimed at eradicating nutria. Paying $5 per nutria tail, their goal is 400,000 dead nutria annually. Although Texas recognizes the seriousness of the problem, we do not have a similar bounty program. 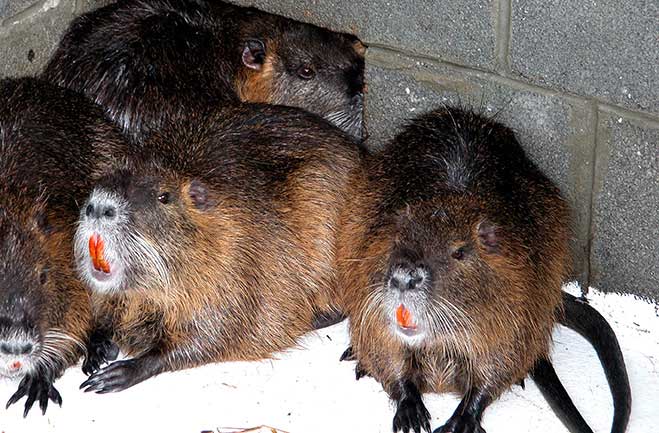 Photo courtesy of U.S. Fish and Wildlife Service
Various organizations around the U.S. have programs for encouraging the reduction in the population of the rapidly-spreading Nutria.

One Louisiana nature center sponsored a nutria festival with the theme: “If you can’t beat ‘em, eat ‘em.” In spite of their ugly dental work, nutria are tasty little beasts and some chefs prepare a variety of recipes including nutria with mustard sauce and nutria fettucine. The meat is also sold to zoos and alligator farms for animal food.

And a word of warning: nutria carry a variety of parasites and diseases. One nematode causes a rash acquired by handling the animals. Trappers refer to it as “marsh itch” or “nutria itch.” Other more serious diseases include tularemia, leptospirosis“ and a virus causing an inflammation of the heart muscle and the covering of the spinal cord and brain.

Nutria were once raised for fur, and at one time, breeding pairs went for as much as $2500. Nowadays fur dealers only pay about $2 per pelt, and many won’t take them anymore, although Web sites currently sell tanned nutria pelts for $80-$100 apiece and a full nutria fur coat costs nearly $1500.

Alligators are the main nutria predator, but they are also eaten by snapping turtles, gars, snakes, and birds of prey. Nevertheless, predation, trapping and other control measures, including gourmet cookery, are barely making a dent in their spreading populations.

Nutria reach sexual maturity at 4 to 8 months of age, and after a gestation period of only 130 days, give birth to between 1 and 11 young. A more typical litter is 4-6. In five to seven weeks they are weaned and on their own. Females can breed again within 24 hours after giving birth. To say they reproduce like rabbits would be a major understatement.

Nutria may be an interesting part of East Texas fields and forests, but they are serious pests. At the rate they’re going, Texas swamps and marshes could soon be eyebrow deep in furry mouse-beavers.