Although Osage-orange (is one name for this native to East Texas tree, they are also known as hedge apples, bodark, bois d’arc, and bow wood. Their scientific name is Maclura pomifera. Members of the mulberry family, they generally grow to be a small to medium-sized tree, 30 to 60 feet tall, with a short trunk and a rounded or irregular crown. Their twigs are a terror to tree climbing young people, since they're armed with half-inch spines. When they’re cut, the stems ooze a sticky, milky sap, as do damaged fruit.

When I was a kid - back in the days when dinosaurs still roamed my Dallas neighborhood - we used to break off a thorn-studded branch and chase each other with them. We never called their grapefruit-sized, wrinkled, lime-green fruit anything but “horse apples,” a name that sounds awfully close to “cow pies,” although to my knowledge, horses had nothing to do with them, apples they weren’t, and certainly they were nothing like the bovine pastry mentioned last. 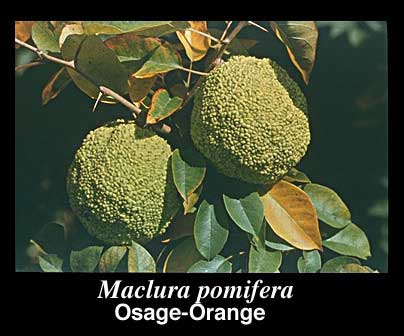 They were, however, excellent missiles, and a guy with a good arm could “chunk” one of these nearly half-pound vegetable cannon balls with devastating accuracy and velocity. It was bad enough to get hit anywhere, but smacked in the head brought stars to your eyes! Dangerous? I suppose, but those battles were in the good old days before people started suing for a gazillion trillion dollars if they spilled hot coffee in their lap or their manicurist left a rough place on their fingernail.

Anyhow, James B. Bonham Elementary School in Dallas, where I used to be an inmate, had a whole line of Osage orange trees on the playground. Of course, it was against the rules to climb them, and especially to throw the horse apples. So, every recess, a few of us thrashed around like monkeys from limb to limb and conducted limited warfare with the fruit. That’s one of the reasons I spent so much recess time as a POW, baking in the sun, in solitary, teacher-imposed isolation, sitting on the play box by the back steps of the school.

Horse apples fall from the trees this time of year where they slowly decompose on the ground and attract yellow jackets, even though the trees and fruit supposedly repel insects. In fact, horse apples are often sold at craft fairs as insect repellent. Years ago, some people planted them around their home to discourage cockroaches, spiders, box elder bugs, crickets, and other multi-legged critters. It's also said that pioneers sliced open the fruit and used it as fly-poison. However, I have never read any research that supports their insect repellent uses or their deadly qualities. In fact, squirrels eat the seeds during the winter, but they’re - well - kind of squirrelly, so that's not much of a testimonial. Squirrels also eat the deadly Amanita mushroom with no ill effects, so who’s to tell? Most animals apparently find horse apples to be unpalatable and leave them alone.

In years past, especially before barbed wire (Bob wahr) became popular, Osage orange trees were closely trimmed and used as dense cattle-proof hedges. The wood is very durable and rot resistant, and has been used for fence posts, insulator mounting pins on telephone and power poles, and furniture. Some of its most intriguing uses date back to antiquity when Native Americans used the tough, springy wood for war clubs and bows. I found several Web sites that sell Osage-orange blanks to archers who still make their own bows and consider it the finest bow wood available. Another interesting note is that a bright yellow dye can be extracted from the inner bark of the tree.

If you decide to pick up some horse apples along the road either for warfare or just to examine them, remember that as they age, wasps find them very attractive, so be careful. The sticky, white sap will also gum up your hands and turn dark. Some people develop a skin irritation from the sap, and I don’t recommend sampling them as a snack. Even though I can find no official reference to Osage orange being poisonous, plants with sticky, milky sap frequently are. Just look at them or lob them. Don’t eat them. They’re one of the unique and interesting parts of East Texas fields and forests.