Photo by Brendan Lally
A great horned own displaying its typical inscrutable stare.

Sitting motionless or soaring silently through the dark night stalking a meal, owls have long been regarded with awe and fear. Perhaps it’s because they move about in darkness, or maybe it’s their eyes. To stare down an owl is a Herculean task and it’s likely the feathered challenger will win. Owls don’t just look at you, they glare. Huge eyes, facing forward, often with overhanging “eyebrows,” seem to dare anyone or anything to argue with them. They have eyelids and yes, they blink, just not very often. Staring into an owl’s unblinking eyes is a venture into mystery and the dark side of life. Besides, they give me the impression they can read my mind. Spooky!

Add to this the fact that some owl calls sound like they come from the depths of a sepulcher far beyond the veil of the living, and now you have the worst of all worlds.

Are owls wise, or emissaries from the Grim Reaper? Depending on the country or culture, they may be either.

Ancient Greeks believed the owl was a source of truth, and sacred to Athena, Goddess of wisdom and the night. Sitting on her shoulder, an owl imparted priceless gems of truth by speaking quietly in her ear. With their wide, all-seeing eyes they were supposed to see all things as they were, unclouded by deception and subtle distortion.

In many cultures owls are believed to be harbingers of sickness and death. An owl flying by the window of an ill person in Britain presaged their death, and to hear the owl speak your name is almost universally regarded as a sentence of death. (Read the book I Heard The Owl Call My Name by Margaret Craven.) Owls hooting in the daytime are supposed to be warnings of impending danger and death. Well, I hope not, because over the last month one hooted for quite some time down by our pond in broad daylight. But try as I might, I couldn’t quite make its “hooooot! Hoot! Hoot!” sound like “Poool….Poooool, Pool Risk!!” Or at least I don’t think so. Hmmm! I’ll have to think about that a bit.

According to some stories, the deaths of Julius Caesar, Augustus, and Agrippa were predicted by the hoot of an owl. In contrast, Greeks believed sighting an owl predicted victory in battle, and they minted the raised image of an owl on the Tetradrachm coin of Athens in the 5th century B.C. An owl flying over a Greek army at dawn was regarded as the strong omen of a coming victory. 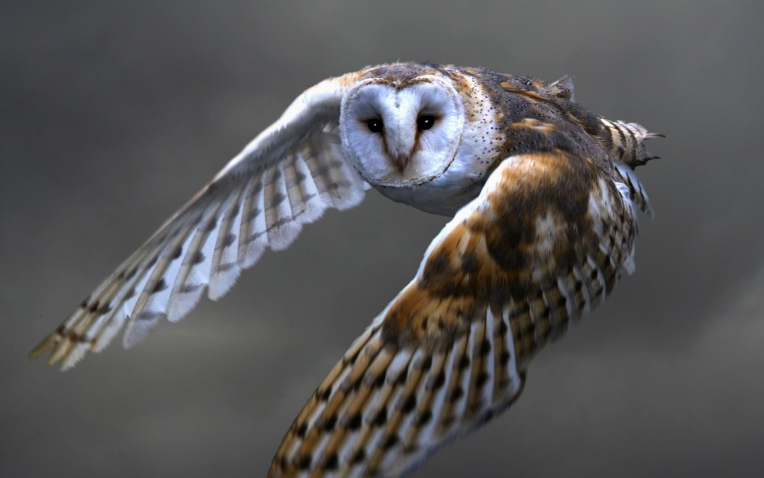 Photo from mpophomeniconservationgroup.wordpress.com
A Barn owl in flight.

Some pueblo Indians believe that placing an owl feather in the crib alongside a crying baby will sooth it and allow sleep to come.

Are you planning to visit Scotland? In modern Scottish and Welsh languages, the words for owl still carry allusions to death and darkness. Think about that as you don your kilt and sally forth into the firth and heather, or along the shore of a loch, and are suddenly accompanied by one or more owls. Why are you attracting them? Owls are associated with mystical sorcerers and witches, and people possessing owl “magick” attract these feathered Merlins. Are you secretly kin to owls? What do they know that you don’t? Whoooo? Yooooou! That’s who!

Owls are definitely one of the most fascinating animals in the deserts, plains, and mountains of the world. Certainly East Texas has plenty of them, and they’re definitely a source of great and legitimate worry to rodents and other small animals and birds.

Of course, whether you think of owls as good or evil is up to you. But if you want to be on the safe side, in France it is believed that throwing a little salt into your fire will ward off the owl’s curse. Remember that the next time you go camping and hear an owl hooting in the darkness.