It’s pear and peach time in our Texas backyard and we’re also maintaining bird feeders, the latter mostly for a bumper crop of young northern cardinals. I’d like to say all this bounty makes for an idyllic situation, but that’s not so. It’s chaos. As soon as a peach even thinks about getting ripe, our local squirrels snatch ‘em and run. As a result we’ve lost virtually all our peaches and a large percentage of the pears. Later in the season they scarf up our pecans with equal zeal.

Squirrels are brazen characters. Apparently they well know there is a hunting season for them and they can’t be shot – legally – at any other time of the year. Needless to say, the allowable period for blasting squirrels is not when our fruit is ripe. So these varmints will stuff their faces with peach or pear puree and look you right in the eye while they’re doing it! The only possible control suggestion I know of is to blaze away at them during open season in an effort to reduce their population. But, the little tree rats breed prolifically and probably even invite all their distant relatives to come feast during fruiting season so even that may be a losing battle. And by the way, you can’t discharge a “far-arm” inside the city limits. It upsets neighbors and peace officers too.

Raccoons, of course, are famous thieves. They even wear masks to protect their identity, although after a lot of practice and careful observation I can usually recognize them in spite of their disguise. ‘Coons can climb most anything and in our case they not only eat our fruit but also decimate the bird feeders. They climb up and break the feeders to get at the seed. A single night of raccoon visits to our feeders will completely clean them out. Then during the day, those pesky squirrels take over. 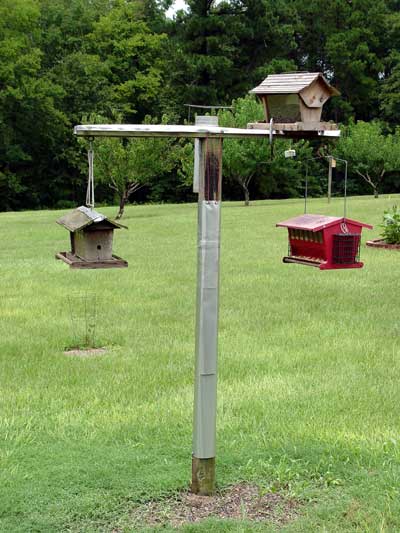 Photo by Paul H. Risk
My aluminum-sheathed bird feeder is connected to an electric fence charger and proves to be a truly shocking experience to prowling raiders. They now give it a wide berth.

To further compound the problem, deer have gotten into the act. They know we never shoot them so over the years they’ve come to regard our backyard as a private feed plot, which was perfectly fine as long as they limited themselves to grass. They would munch away even when we were in the yard unless I huffed at them like an enraged buck. But when they started chomping on tender new fruit tree shoots and newly planted pecan tree tips, my sense of compassion got a little stretched. We finally stopped that depredation by adorning each tree with a tattered white plastic bag from the place “whose-name-must-never-be-spoken” but whose initials are WM. Personally I’m convinced the corporate emblem on the bags spooks them. But maybe the bags just wave in the breeze and frighten them. Anyway, they work.

But when Bambi and his relatives found out they could also smack the bird feeders around and spill seed on the ground to eat I got a little tense. They began bracing themselves by resting their front legs on top of the wooden cross piece the feeders hang from. That gave them better leverage to smash the feeders.

Our final solution for the bird feeders was to staple a sheet of aluminum on top of the cross-arm and sheath the support post with the same metal. Then a $20 electric fence charger was connected to the metal parts. Zap! The first night after our little electrical surprise was put into action there was a single muddy raccoon track on the lower metal sheath and no lost seed or feeder damage. Next night another footprint appeared on the other side of the post. Pow! No damage. Some deer scuff marks on top of the metal covered crosspiece showed up once too, but no damage. The squirrels don’t like it either and none of these critters – squirrels, ‘coons or deer – have tried the feeder heists again. I don’t know if you’ve ever touched an electric fence, but let me tell you, once is enough. Ours puts out pulses of current once a second and it really smarts. Birds are not disturbed by it for the same reason they can sit on high voltage power lines. Their feet aren’t touching ground.

Another prowling munch mouth we have trouble with at our place is wild pigs. The other evening as I drove up the driveway, two very large porcine panhandlers boldly walked right in front of me heading for a pear tree. Wild pigs are common throughout East Texas and are very destructive pest animals. Six of them rooted up a quarter acre of our yard one night. It looked like it had been plowed – not disked – plowed! Wild pigs are fair game the year round. Turns out those two pear-pigs were definitely not immune to .45 caliber hollow-points and the six others don’t like .223 caliber rifle bullets very well. Besides, they’re delicious.