Red-headed pine sawflies are active again this fall in East Texas. They look like butterfly or moth larvae, but are actually the immature form of a non-stinging wasp. The name adds further confusion, since they are not flies but are instead related to bees and wasps. Their name comes from the saw-like ovipositor – a sharp, toothed extension at the end of their abdomen – that they use to saw into pine needles to lay eggs. The colorful caterpillars are about an inch and a half long and cluster in groups of about a hundred at the ends of pine twigs to eat the needles. Sawflies are the only wasp that feeds on plants. 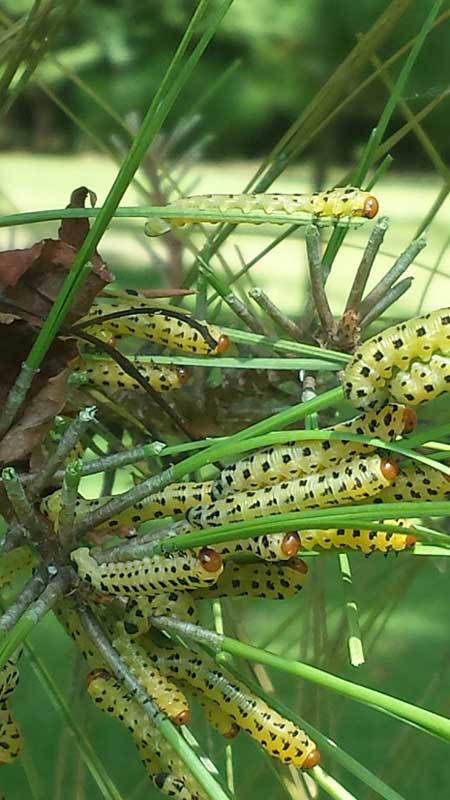 Photo by Debi Ryan
A cluster of colorful yellow and black red-headed sawfly larvae devouring the needles on a pine twig in southern Nacogdoches County.

Red-headed pine sawfly caterpillars are quite spectacular, with a rusty red head, yellow body and striking black markings on their back and sides. Since they cluster in large numbers on the ends of pine twigs they are easy to spot.

The adult sawflies use their ovipositor to cut a slit in a pine needle allowing them to insert eggs. In two to three weeks newly hatched larvae hatch and begin to eat the needles. They are most active in the late summer and fall.

Younger larvae eat only the outer tissue of pine needles and older ones devour the whole needle, resulting in a tangle of straw-like dead, brown needles, or completely bare twigs. Luckily, pine sawfly larvae are eaten by birds and over 50 other predators, so their outbreaks are generally short-lived.

Completing their life-cycle, they drop off the tree into the pine duff under the host trees where they form a cocoon and overwinter. With warming spring weather, they hatch into mature sawflies that lay more eggs to start the cycle over again. The adults are seldom seen.

In East Texas, these voracious defoliators eat the needles of shortleaf, longleaf, and loblolly pines. Generally they attack younger trees less than 15 feet tall, and can completely strip a small tree. Even if they don’t eat all the needles, the damage they cause severely disfigures the tree and weakens it making it an easier prey to bark beetles and other boring insects that can kill it. The damage they cause can be a serious problem for commercial tree growers. Landscape trees can also be severely damaged by their depredations.

Debi Ryan, Managing Editor of the Nacogdoches Daily Sentinel, said she recently observed these caterpillars in large numbers on two small trees on a relative’s property in southern Nacogdoches County. Her photograph of a cluster of them accompanies this article. She had not noticed them before. However, information from the Texas Forest Service states that they are common and tend to occur every few years.

Pine sawfly larvae can be controlled with commercial pesticides, but the process is somewhat expensive if a large number of trees are involved, and generally requires aerial and/or high pressure spraying. For the homeowner with only a few small trees, the caterpillars can be shaken or knocked off the twigs into a bucket of soapy water which kills them.

Sawflies are another example of the many niches in the complex web of life, from the largest animals down to the tiniest micro and submicroscopic forms. We may not always like them, but I’m still in awe of the many interactions found in nature. Hopefully, you are too.