It’s said, “whatever goes around, comes around,” and pine pitch is certainly a case in point. Humankind has long had need to stick things together or disinfect and heal wounds. In modern times, the two needs combined in the development of self-stick bandages – the most commonly known called Band-Aids. A little adhesive strip with a gauze compress in the middle, sometimes treated with an antiseptic, these innovative items are found in first aid kits and home medicine cabinets across much of the world. 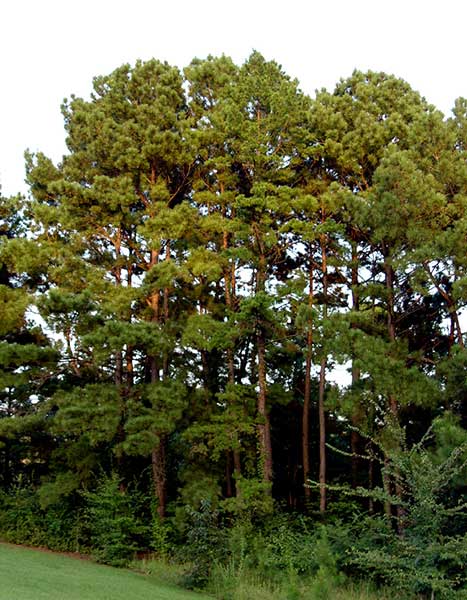 Photo by Paul H. Risk
The pine forests that cover so much of East Texas are rich in historical uses including waterproofing and medicine.

For hundreds, perhaps thousands of years, those who hunted, fished, fought, trapped and carried heavy loads up slippery trails, or merely worked around the cave at do-it-yourself projects, were continuously dinging, whacking, scraping, and cutting themselves. Where were Band-Aids then? Fortunately, with a little innovative flare, early people found them in nature. In fact, it could be said they grew on trees. Pine trees.

Pines come in numerous varieties, including three that were always in high demand – white pine, yellow pine, and pinyon pine. Hidden inside the tissue of pines are special vessels called resin ducts through which flows that sticky substance we call pine pitch. Pitch is intended to ooze out and harden when a tree is damaged. When an insect chews its way into a healthy pine, pitch blocks entry and glues the little beggar in place, also filling the open wound to prevent bacteria or viral attacks and then hardening into a “scab” under and around which plant scar tissue forms to protect and close the injury.

At some point, an adventurous entrepreneur decided to put the sticky stuff to use. Melted and poured over the surfaces of baskets, it was found to seal them for water containers. Pitch could be used as cement or glue to attach feathers to arrows or enhance the attachment of arrowheads. Turquoise, obsidian and other stones were attached to Indian jewelry using pine pitch glue. Obviously, early people were capable of innovative solutions to many needs that we still have today. Certainly, there is no shortage of tasks around my house that a little glue or adhesive can’t solve. Nowadays there are so many different kinds available that hardware stores devote many shelves to assorted sticky stuff intended to meet a multitude of needs. 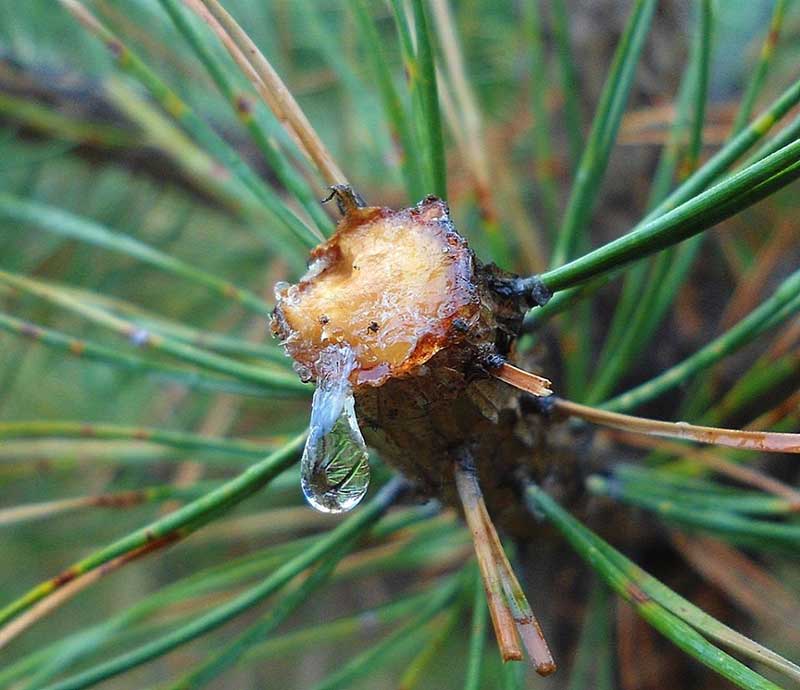 Photo from PineNutOil.org
Pine pitch oozes from the resin ducts of a pine branch.

Today and far back in antiquity, the question of minor wounds and abrasions existed and pines provided the answer. Dissolved in its pitch, turpentine and chemically related compounds are highly effective antiseptics. At some time in the dim forgotten past, an inventive soul with a scrape or cut looked at the aromatic pitch on a pine, sniffed it and decided to smear some on a wound. Darn stuff burned, but we all know, “if it hurts, it’s good for you.” To his great pleasure, the pitch didn’t easily rub or wash off (not that he was washing very often) and was readily obtained. In fact, its sticking ability was already legendary. Get it on you, and it was there to stay. So, there they had it, glue that healed.

Recently, at least two manufacturers have come up with liquid bandages not too different from that ancient gooey treatment. Band-Aid Liquid Bandage™ and Medtech’s New Skin™ are two products now available over the counter, both of which hark back to that sticky-fingered experimenter in the ancient fields and forests. The former is a stingless polymer that forms a tough, flexible coating with only one application and the latter is a substance distantly related to fingernail polish, sometimes requiring multiple applications and it does sting a bit. Both stick well and form a clear, waterproof protective covering. A relative of Super Glue is also currently used by surgeons to close incisions.

More and more, it seems medical science is learning or re-learning lessons from the past. Whether it’s botanical drugs or paint-on bandages, we have much to learn from nature’s fields and forests.