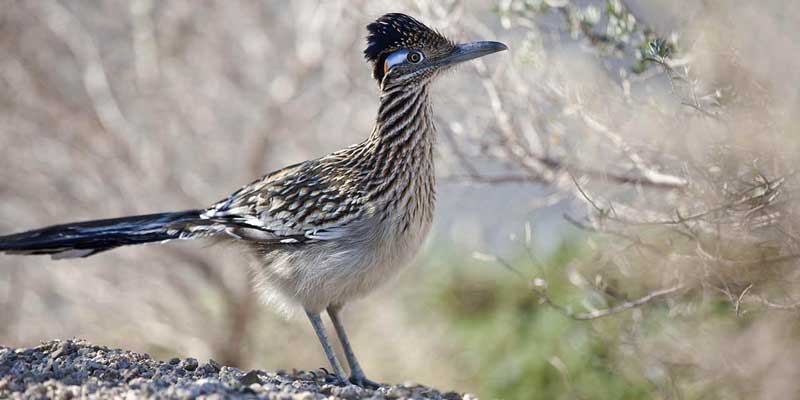 Jzabloski/Getty Image
Roadrunners are spectacular birds, found not just in East Texas, but throughout much of the southwest U.S.

Found throughout much of the southwest United States, roadrunners are immortalized in folklore, Native American religions, as well as cartoons, and are the state bird of New Mexico. Related to cuckoos, they prefer to strut, walk, and run rather than fly. These famous birds are large – 17-24 inches long, with a wingspread of almost two feet. Standing flat-footed on the ground, this big bird stands 10-12 inches tall.

Roadrunners are one of my favorite birds, partly because of the Loonie Tunes and Merrie Melodies cartoons featuring their ongoing battles with Wile E. Coyote, who is constantly trying to outwit his feathered speed-demon adversary. Wile E. should have long ago given up the competition. He’s been smashed, bashed, and diced so many times by backfiring traps he set for the roadrunner, you’d think he’d give up. I can’t decide whether the bird is smarter, or Wile E. is just plain boneheaded or stupid to recognize that he’s beaten before he even starts. Sporting a broad, smart-alecky grin and his trademarked Meep! Meep!, the roadrunner always seems to leave the coyote in a cloud of dust, or worse, as a grease spot on the ground.

Roadrunners are fast, able to run at about 15 mph, but coyotes have been clocked at over 40 mph. So logic would lead me to expect the bird to always get blasted by the coyote. But it never happens in the cartoon world. When a roadrunner runs, their body is parallel to the ground and their feet are almost a blur. They can dodge and swerve at breakneck speed.

Speed, agility, and sharp eyesight combine to keep roadrunners and their offspring well fed. Their diet consists of insects, spiders (including black widows and tarantulas), lizards, snakes, mice, young birds, bird eggs, and even scorpions. Rattlesnakes are a surprising part of their menu. Sometimes two roadrunners will team up on a rattler, harassing the snake until one of them gets a firm grip on the reptile and whips it up and down against the ground or a rock until they beat it to death. When they collect snakes and lizards for their offspring, they stuff the meal head first down the gullet of the youngster. Often, the meal is too long to fit in all the way, and it’s not uncommon to see a roadrunner traveling around with part of a snake hanging out of its mouth. As the digestive juices dissolve the meal, the rest is slowly worked down until it’s all gone.

I wish there was a way to induce them to spend more time around our yard. But their carnivorous diet means you can’t just put out a seed feeder and attract them.

Native Americans have long held the roadrunner in high esteem. And there is the whole mystical thing about the kind of people they hang around with. You need the right “Hozro” (Navajo: harmony with beauty all around), and not everyone has it. (I’m only half joking.)

Tony Hillerman, in his book The Ghostway, wrote that it is

“…a sort of blend of being in harmony with one’s environment, at peace with one’s circumstances, content with the day, devoid of anger, and free from anxieties.”

The Hopi and other Pueblo tribes believe that roadrunners are medicine birds, and can protect against evil spirits. Their X-shaped tracks make it almost impossible to tell which way they are traveling and thus harder for evil spirits to follow. Some Native Americans decorate a baby’s cradleboard with painted roadrunner tracks for good luck and protection.

I consider it a good omen to see them. We have two that come around our place. The other day my wife saw them walking around our back porch and standing on top of our firewood pile, practically staring in through the French doors. There are spiders and other insects in the woodpile and the corners of the porch, so that may have been the reason. But I think they were merely curious.

Although seeing a roadrunner is supposed to be good luck, some people say that if one runs across the road in front of you, it’s only good luck if it runs from left to right. Right to left is a bad omen. Seeing one is enough for me. I don’t split hairs about their travel direction.

In a nutshell, roadrunners are unusual birds in size, behavior, and speed. There’s nothing else quite like them in East Texas. If you see one count yourself lucky, if for no other reason than that they are rare, and another fascinating part of our fields and forests.