Red-breasted robins – big, fat, and feisty – are all over the place. Although they live in Texas year round, their numbers increase as many that have been in Mexico and farther south for the winter begin to invade lawns and flowerbeds in search of food, friends, and mates.

Photo from northernwoodlands.org
Robins have returned to East Texas.

Food is high on their list of priorities. We’ve all seen them stalking a meal. They take a few steps, stop, tip their head from side to side, and make a lightning-swift grab with their beak. Are they looking or are they listening? Scientists have conflicting opinions on this, but there is good evidence that they are using both their eyes and ears. When I was a kid we were taught that when we approached railroad tracks we should “Stop, Look, and Listen.” Obviously, robins use the same method, although for different reasons. I doubt that many of these red-breasted birds have ever been smashed flat by a speeding earthworm. They rock their head back and forth because with eyes on the side of their head, vision directly in front of them is very limited. That cocking action helps them determine distance to their target.

We all learn homilies to assist us in becoming productive members of society. Among them is the motivating phrase that “the early bird catches the worm.” Actually, I’ve seen plenty of late afternoon robins having excellent success in worm hunting. Since I’m not a morning person, I choose to disregard that advice whenever possible.

Once a worm is located, a real struggle often ensues before dinner is finally extracted from its burrow. Ever wonder how a limbless organism like a worm can be so good at holding on? They have little bristles called setae along their body, and with them firmly inserted in the walls of their passageway, it’s no picnic for a robin to wrench them out.

We all know – or think we know – that robins subsist almost entirely on worms, insects, etc. But only about 40% of a robin’s diet comes from their carnivorous habits. The rest of their food is made up of seeds, berries, and other vegetation, although some writers have suggested that they only eat these when meat is in short supply.

Robins consume a wide variety of fruit, including juniper berries, chinaberries, privet, and yaupon berries, and they apparently thrive on them. The main exception to this healthy fare is when the fruit has hung around too long, or has been frozen and thawed, causing it to ferment. A robin stuffed with fermented fruit is a sight to behold as they drunkenly wobble, stagger, and flop around. Depending on their degree of intoxication, they can sometimes still fly, but not well. Their takeoff is uncertain at best, and some crash during the initial roll down the runway. As their blood alcohol level increases (as well as the concentration of other fermentation products) they finally just wander aimlessly about, or sit hunched in one place with their feathers fluffed out. Of course, this makes them easy prey for cats and other predators, although I’ve never actually seen such an attack. Maybe alcohol soaked robins don’t taste very good.

Robins are thrushes; large birds about 10 inches long. They overwinter and breed throughout Texas and are one of our most common avian associates. Well adjusted to dwelling in close proximity to people, they frequently go about their business without even bothering to fly at our approach. 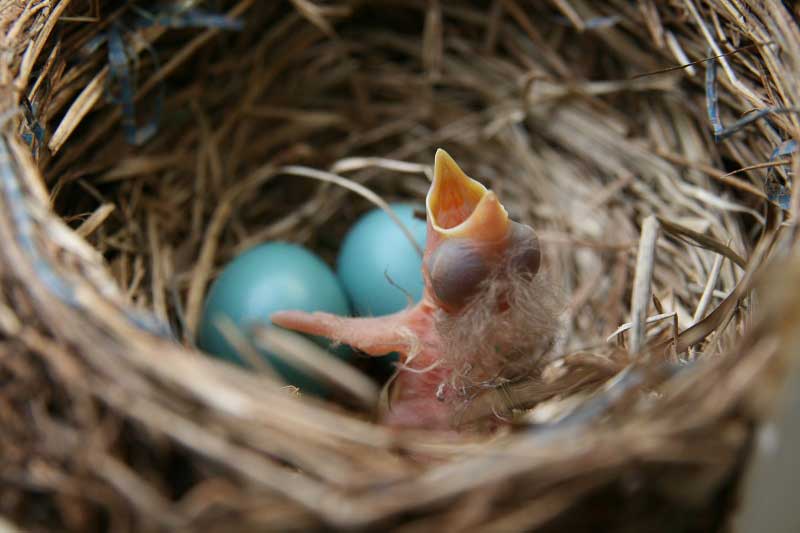 Female robins make a cup-shaped nest of mud mixed from grasses and small twigs, and upholster it with a soft lining of fine grass. Its inside diameter is about 4 inches, and it takes a robin 4-6 days to build one. Nests are usually placed on a horizontal limb 5-30 feet off the ground. Three or four eggs a little over an inch long are laid. The eggs are a characteristic blue-green that any paint store recognizes as “robin’s egg blue.” Once in awhile, a white egg is produced.

In 11-14 days the eggs hatch, and the young nestlings remain in the nest for about two weeks, keeping their mom and dad very busy providing food. Fledglings stay around the nest for up to a month, begging parental handouts.

Juvenile robins are easy to spot because of their speckled breasts, and a little like human youth, by their clumsiness.

Male robins have dark, almost black heads, gray backs, a distinct white ring around their eye, and a prominent brick-red breast. Females are paler in color and their breast is more of a buff color.

These birds are not limited just to Texas. During summer their range extends all the way to northern Canada and Alaska, and their winter migrations take them south as far as Guatemala.

Their presently increasing numbers, coupled with bursting flowers on camellias, flowering quince, tulip magnolias, flowering cherries, and wild plums, are a clear indication that in spite of the past few days of chilly weather, spring has sprung in the fields and forests of East Texas.