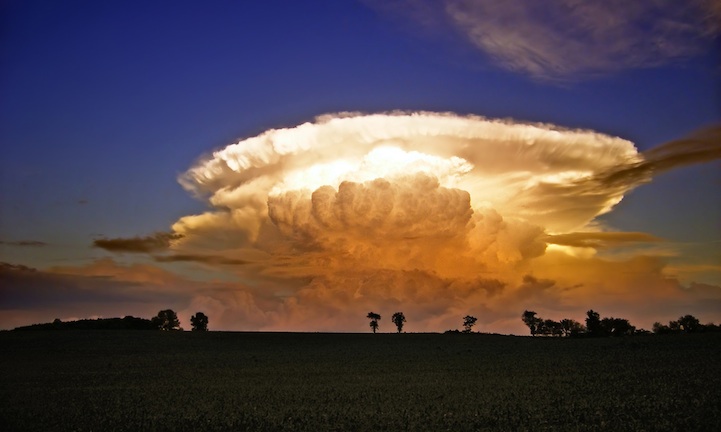 Photo by Nicholas A. Tonelli, mymodernmet.com/ominous-thunderhead-clouds/
A mature thunderstorm rises as high as 50,000 feet, or more.

Buds are bursting and trees are wearing young new foliage, others are tinged with deep red as spring growth gathers its energy for the annual bud burst of leaves and blossoms.. The day length is increasing and the sun’s radiation is striking the earth more directly, gradually warming its surface. The Equinox was last Thursday, so we’re definitely into Spring.

As the land surface warms in the sun, it heats the air over it. Since warm air is less dense, parcels of air begin to rise to cooler altitudes causing the water vapor it’s carrying to condense into clouds. Roughly, for every thousand feet of altitude increase the temperature drops 3-5 degrees. So, as the clouds rise they enlarge. Updrafts at the surface of the land sweep huge quantities of energy into the skies and what started as simple white puffs begin to tower higher, rolling, soaring, billowing and growing darker as the moisture content in the clouds increases.

Thunderstorms are forming. Winds in the clouds rub raindrops against each other generating static electricity. Within the thunderhead, winds race up and down at speeds of up to 250 miles be hour causing massive electrical charges to develop. The gigantic sparks we call lightning leap within the clouds and to the ground. Shock waves caused by these blasts of electrical energy create thunder, first rumbling in the distance, then growing in volume to ear splitting cracks as the storm moves closer.

Counting the number of seconds between the flash of lightning and its thunder crash will indicate your distance from the storm. Sound travels at about 1100 feet per second, so a five second delay between the flash and boom means the strike was 5500 feet – a little over a mile away. As the delay between lightning and thunder grow less, it’s time to take cover, unless you have a hankering to test your beliefs in life after death. Lightning can strike as far as ten miles from a storm. According to the National Weather Service, about 95 people die from lightning strikes each year in the United States and hundreds of others receive permanent crippling injuries. Although a lightning bolt only lasts about 1/10th of a second, the energy released is tremendous. The average lightning bolt carries 150 million volts of electricity at approximately 125,000 amperes! Scary!

At first merely interesting, the maturing storm now commands attention as cloud tops tower to 50,000 feet or higher with rain streamers reaching out ahead. Sometimes the sky takes on a yellowish or yellowish-green color. Bursts of downward rushing cold wind whips trees, the sky blackens and hail as large as eggs may lash the ground. In the worst case scenario, sinuous, rolling horizontal masses of air at ground level twist upward and the lower portions of cloud begin to rotate. The spinning air column gains speed and descends to the earth as a swirling, funnel. The gentle looking cotton candy clouds have spawned a tornado, ravaging across the countryside with winds as high as 318 miles per hour, roaring and bellowing across the land like a maddened freight train. Trees are ripped from the ground, roofs sail through the air, building disintegrate, cars are snatched up and thrown like toys, entire communities disappear and people die. 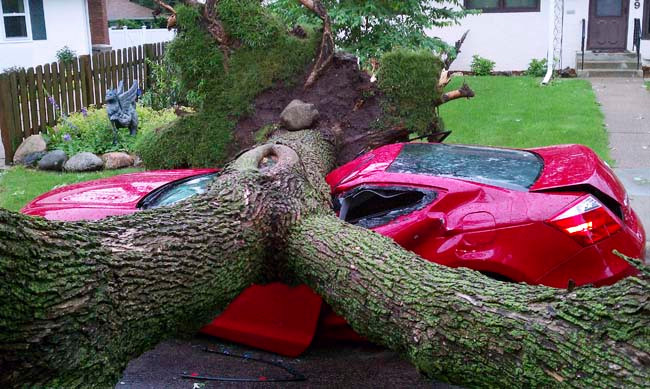 Photo by Jason A. Cook, www.twincities.com
This large tree was blown over by heavy winds during a thunderstorm.

The months of April, May and June are peak periods during which nature exhibits its violent power to the maximum and puny humans and their works often receive severe lessons in humility and perspective. In the face of rampant natural forces, humankind’s enterprises take on a distinctly diminished stability and permanence. What is here now and seemingly always has been, can be gone or reduced to rubble in moments.

Severe storms are a fact of life in this part of the country, so get ready to enjoy the ones that are no threat, avoid those you can and survive any you cannot escape. Generally, spring and early summer are pleasant and beautiful times here and in the absence of damage and death, even severe storms have great beauty and aesthetic magnetism. Enjoy the sights and fragrances of spring flowers and the sounds of spring bird songs, but prepare also to be cautious of the spellbinding majesty of some of weather’s greatest spectacles!