Survival is an Attitude – Everywhere 6 Jan 2016

Some time ago I was amazed to see a hawk suddenly swoop down and snatch a bird right off our feeder. Whap! He never saw it coming. 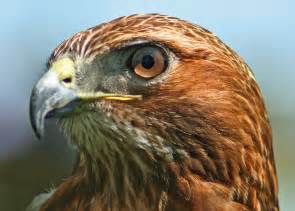 Photo from naturalwealthjournal.com
This hawk is watching for a meal. It's a jungle out there in the fields and forests, and in our cities. Are you prepared for human "hawk attacks?"

Usually animals are more aware than that. They take a bite, glance around, quickly snatch another bite, and look around again. That’s called situational awareness, and animals that can’t perfect the technique don’t last long.

Situational awareness, as any bird worth its salt will tell you, means you constantly notice anything that “doesn’t look quite right” and prepare to evade, escape, or fight. If they’re fast enough or sufficiently combative, they live to see another day.

The field and forests are filled with denizens that are constantly engaged in the survival of the fittest. The residents learn to recognize threats by behavior, colors, patterns, sounds, shape, and motion. There are no practice exercises, and tests are not graded on a curve. Wild creatures quickly learn “this is not a drill.” Dangers are real and errors are usually fatal.

Unfortunately, our society has become more like a wilderness than ever before. Crime and maniacal terrorism are on the increase. Yet too many of us continue to drift through life blissfully unaware. We leave our homes and cars unlocked, and valuables left lying in plain view on the seats. We walk around looking at the ground instead of at our surroundings. In short, these predators see us as prey.

In over 30 years of teaching emergency preparedness and wilderness survival I’ve preached one over-riding rule. “SURVIVAL IS AN ATTITUDE.” Prepare for every eventuality no matter how far fetched. Don’t plan what you’ll do “if” an emergency happens. Plan for “when” it happens. That mindset will put you several steps ahead when life suddenly turns to worms.

Always be aware of your surroundings, especially in malls, airports, train stations, sporting events, fairs, and any other place people gather in large numbers. Is someone behaving strangely? Are they dressed, pierced, or tattooed in ways that create concern? Are they alone, or in a group of similar-looking people?

What will you do if you see someone in a mall carrying a gun in their hand? What if they start shooting? What if that happens in school? In church? What if you see someone put a package, backpack, or suitcase down in a crowded area and walk away from it? It could be an improvised explosive device (IED), a nice way to say bomb.

What if you see or hear an explosion? Don’t go see what happened. Terrorists often set more time-delayed devices in order to kill or injure gawkers and first responders.

Is someone watching you? Are they approaching you in a parking lot? Standing beside your car? Is a strange vehicle repeatedly driving through your neighborhood? Are its occupants suspicious looking? Is someone you don’t know knocking at your door asking to use your phone because their “car broke down,” or trying to sell you insurance, or some other scam?

Does everyone in your family know how to call 911 for assistance? Can they give their address in case it doesn’t show up on the 911 operator’s screen? Do your kids know never to tell callers that they are home alone? And why are they alone to begin with?

Incidentally, since January 1, 2016, open carry of firearms by those licensed to do so has become law in Texas, except in places posting specific prohibitory signs. So, you may see more people legally carrying guns. But why a person with a handgun permit wants it to be visible is beyond my wildest imagination. Why identify yourself as a prime target for maniacs? Or are you just trying to impress people? If you have a concealed handgun permit, keep it that way. Then it’s “surprise, guess what I have for you” when a crisis develops.

In any case, deranged foreign and domestic terrorists, some touting distorted religious agendas, and mentally disturbed people seem to be everywhere. As the Wicked Witch of the West said in the Wizard of Oz, “What a world! What a world!”

If my questions and comments have made you uncomfortable and nervous &8211; good. That’s what I intended. If not &8211; you are probably still living in a dream. It’s a jungle out there. Whenever something seems odd or out of place the Department of Homeland Security’s motto says it all: “If You See Something, Say Something.” Report it to the police immediately, and leave the area.

Talk about these things with your family, and take a vow that “I will not be a victim” in the field, forests, or anywhere else.