Eastern Tent Caterpillars are Out and About 21 Mar 2012 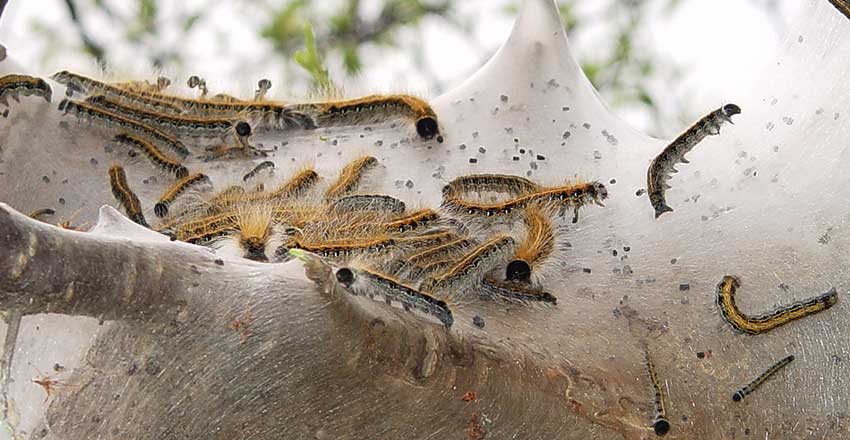 Photo by Paul H. Risk
These hairy black and orange eastern tent caterpillars are clustering on their web before heading out for a snack on tender wild plum leaves.

White tent webs filled with eastern tent caterpillars are one of the first signs of spring in East Texas and many other states. They appear in the crotches of cherry, apple, plum, and hawthorn trees. Emerging from their sheltering tent during the very early morning, midday, and again in the evening, they feed on the tender young leaves of the trees. In between feeding periods, they retreat into the protection of their web. As the tent web develops, they may house more than 200 caterpillars. In spite of their appearance and apparent large numbers, it is unusual for them to do serious damage, and healthy trees are seldom killed by these invaders.

These hairy caterpillars are the larva of a small brown moth with white stripes on its wings. Eastern tent caterpillars have a short life. In early summer the caterpillars make small silken cocoons and pupate inside them to change into mature moths. They emerge in May and June to seek mates. Mature female tent caterpillar moths lay a mass of 200–300 dark eggs on tree branches in May or June and then die. The eggs form a hard mass and remain inactive through the summer, fall, and winter, hatching the following spring when web making will begin again.

If you’re looking for an interesting science project, tent caterpillars make easy subjects. Poke at the web or one of the caterpillars and they will rear up, waving the front section of their body around in an attempt to frighten attackers. We tend to think insects have a simple existence, but that isn’t so. As caterpillars leave the web to feed, they leave behind a chemical trail of pheromones and strands of silk. The chemical pheromones not only direct following caterpillars to feeding locations, but also indicate the quality of the food source.

The web serves to protect the caterpillars from predatory birds, and the long hairs on their bodies may also tend to discourage attackers. Smooth caterpillars may go down smoothly, but a mouthful of hairy ones may not be a pleasant snack.

During rainy or cold periods the caterpillars cluster together to reduce heat loss. As conditions improve, the cold-blooded larvae warm up and start their roaming and feeding again.

Unless you have an unusually large infestation or you just can’t stand the appearance of the webs, it is unlikely that control is necessary. But you can tear out the web, spray the caterpillars or branches with a biological control substance called Bacillus thuringiensis (Bt), or any of a number of contact poisons or chemicals that kill the caterpillars when they eat it. Bt doesn’t need to get on the caterpillars, only on the leaves they are eating. They will die within a few days after eating it.

Although some hairy caterpillars can sting, the eastern tent caterpillar cannot, so they are not dangerous to handle.

To me, they are interesting to watch and not a serious enough pest to worry about. Take a look at these yellow and black striped critters and see what you think.