There are a lot of critters in Texas that folks down here have given interesting, if somewhat puzzling, hybrid names. Yes, we have both toads and frogs, but in spite of football traditions and other folklore, there are no horny-toads or toad-frogs in Texas. I know this declaration will put some dyed-in-the-wool Texans’ teeth on edge because they definitely know that TCU’s mascot is the horned-frog, and the Texas State reptile is the horned lizard (same animal). But read on.

Toads are small amphibians related to, but different from, frogs. The former have relatively short, stubby hind legs and a chunky body. The latter are slimmer and have long, tapering legs with webbed toes. Frogs have to be near water, but toads do fine in drier areas, including my flower beds. They both eat insects and other small animal snacks, but frogs have very long sticky tongues they can flick out to get a meal. Toad tongues (try saying that three times quickly) are thick and short. Basically, toads have to stuff food into their mouths while frogs can stick their tongue to prey and snap it back into their mouths. Frogs have thin, smooth, damp-feeling skin while toads have thicker, bumpy, lumpy, dry skins. 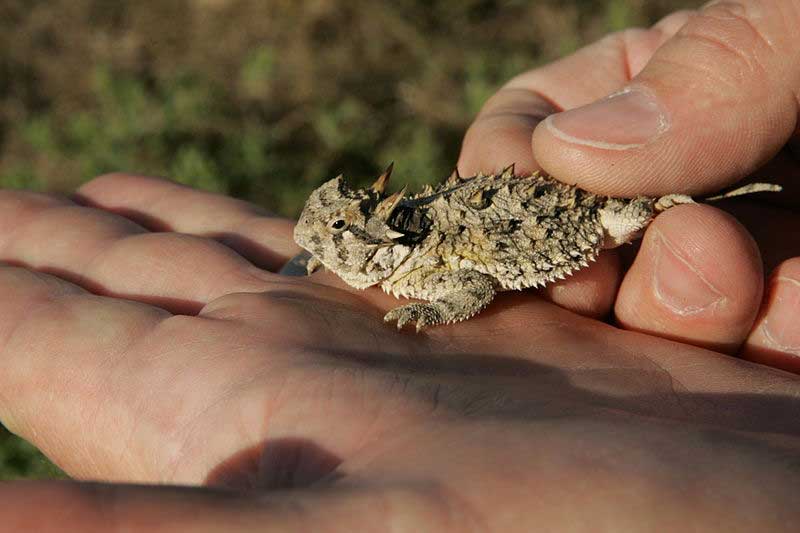 Horned lizards are a crusty and dangerous mistake for an animal bold enough to try to swallow one. They can get stuck in their throat and kill the predator. They also have a capability not matched by any other animal. They can squirt blood from the corners of their eyes when they are endangered or angry. Whatever is in the blood mix must taste terrible. I once saw a dog spit out a horned lizard and go away shaking its head and sticking its tongue out to try to get rid of the lizard spray.

As a child I was taught that handling a toad would give me warts. I mean, just look at a toad, will you? They’re warty all over. That may be, but even so, they don’t cause warts. Warts are caused by a virus getting into the skin through a thorn prick or a scratch.

Toads have a lump behind each eye at the beginning of their back or “neck” called a parotid gland, not found on frogs. It secretes a complex mix of chemicals that are apparently nasty tasting, and in some cases toxic. Skin toxins from toads have been investigated as a possible source of medicine. In fact, toad toxins have been used in the Orient since ancient times for the treatment of a wide variety of diseases.

Some toad venom is very dangerous to dogs. The Marine Toad, also called the Cane Toad and the Colorado River Toad, have skin toxins so hazardous that if they are picked up and mouthed by a dog the animal may die. Pain, paralysis, collapse, and death can occur if the pet isn’t treated quickly.

To top everything, there is a town in the center of Arkansas on the Arkansas River named Toad Suck. It is said that when the river was too low for steamboats, they would tie up there to wait for higher water, and the crew would retire to the local bar and drink so much beer they would “swell up like toads.” Yep, Toad Suck, Arkansas.

There’s even an annual Toad Suck Daze festival at Conway, Arkansas, 7.5 miles east of Toad Suck. It’s the Faulkner County seat. According to their website at toadsuck.org, they say that “since 1981, the Conway Area Chamber of Commerce has held this fun, family-oriented festival the first weekend in May. The festival has raised more than $1.4 million in endowed or directly awarded scholarships. More than 220 Faulkner County students have received Toad Suck Daze Scholarships. Since 2012, Toad Suck Daze has awarded more than $100,000 to local early childhood education initiatives.” But no, they don’t suck toads.