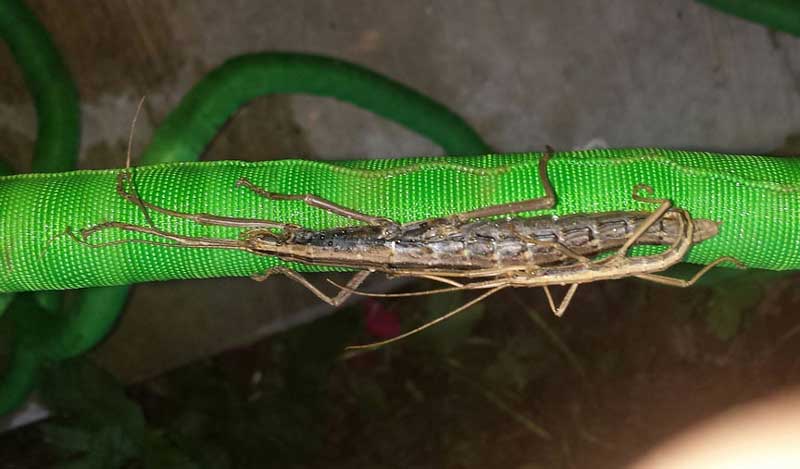 Photo by Paul H. Risk
A female walking stick insect on my green, expandable hose, with the much smaller male riding her back during mating.

Mimicry is an important defense for many animals, including insects. If you look like something that’s not good to eat you’re safer. And if you’re a predator it works in reverse. With some modification, hunters and the military use the same principle, but they call it camouflage. Camouflage battle dress is usually simply called “camo.” Blotchy green, black, gray, and brown clothing or paint on battle vehicles helps them blend in. Snipers often use elaborate “Ghillie” suits covered by loose burlap or other material that so closely match their surroundings it makes them almost impossible to see. Ghillie suits were originally developed by a Scottish Highland regiment formed by the British Army in WWII, but are currently used in combat worldwide.

Some insect mimics include those that make the critter look like a leaf, flower petal, thorns, tree bark, or sticks. Yep, sticks. Here in Texas and many other states, walking stick insects are common. Generally they are grayish with dark markings, or greenish. In the U.S. the females are usually about 4 ½ inches long and thick. The skinnier and shorter males measure around 3 inches in length. This time of the year males are commonly seen riding on the back of the female during mating, as seen in the accompanying photo. In some tropical areas walking sticks attain the stupendous length of 21 inches.

Walking sticks move at a sloth-like pace, making no sudden movements to betray their presence. Rather docile, some people actually keep them as pets in terrariums. Their legs and antennae are very long.

To carry their charade farther, walking sticks sometimes gently sway back and forth as a twig would in a gentle breeze.

These odd insects feed exclusively on plant leaves and stems, and in some areas do substantial plant damage. Feeding is limited to the nighttime hours. In the daytime they cling motionless to a branch or twig. Since they are vegetarians their camouflage is intended only to hide them from predators, rather than allowing them to sneak up on prey. Creeping up on a leaf doesn’t require a lot of stealth!

Eggs are deposited in the soil, on plants, or in ant nests where, interestingly, they are protected by their hosts. Hatching when the weather warms in the spring, it takes several months or up to a year for them to mature. Mature insects live from one to three years, depending on species.

It might be expected that walking sticks are defenseless, but that’s not true. They strike out with their spiny legs at approaching predators, and emit a vile smelling and irritating spray. Their liquid shot can hit with great accuracy up to 2 feet away.

“Featured Creatures” from the University of Florida in November 2003 reported on a human sprayed by the defensive chemical, “The victim was observing a pair of [walking sticks]… with his face within two feet of the insects, when he received the discharge in his left eye… The pain in his left eye was immediately excruciating; being reported to be as severe as if it had been caused by molten lead. Quick, thorough drenching with cool water allayed the burning agony to a dull aching pain. The pain eased considerably within the course of a few hours. Upon awakening the next morning the entire cornea was almost a brilliant scarlet in color and the eye was so sensitive to light and pressure for the next forty-eight hours that the patient was incapacitated for work. Vision was impaired for about five days. Symptoms gradually disappeared and there were no lasting effects.”

Recently I picked one up from a cluster of them in a small, unused bird box they were using as shelter. With a hiss, the insect sprayed my hand. The odor was very unpleasant, and it took several washings with soap and water to get it off. Luckily, I didn’t get it in my eyes.

The bottom line is that if you decide to keep one as a “pet” be aware of the danger involved. Personally, I’d rather they just be allowed to remain unmolested in our wild and curious fields and forests. Look, take pictures, but don’t handle them.