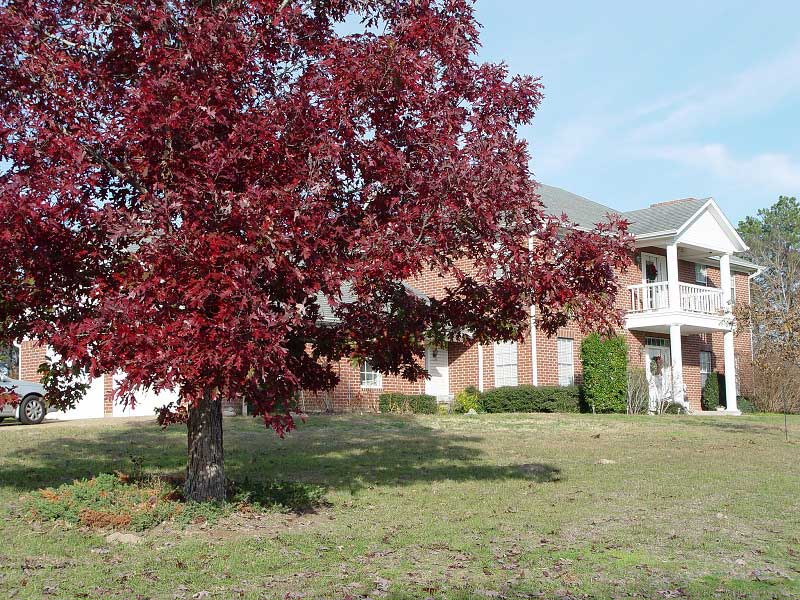 Photo by Paul H. Risk
Our white oak displaying its spectacular burgundy leaves on the 11th of December three years ago. Oaks are the last trees to lose their leaves in the fall here.

In eleven more days, on December 21st at 5:03 p.m., the Winter Solstice will occur. Solstice means a time when the sun seems to pause in the sky. The day length will be the shortest of the year and winter will officially begin. The days will gradually become longer as the sun rises higher in the sky. But long before that, nature has been preparing for winter as biological clocks switch phases.

Personally, I like the long, lazy nights of winter. But some folks suffer from a seasonal affective disorder (SAD) that causes them to become depressed in winter. The condition is more pronounced the farther north you live. Supplemental artificial light is sometimes prescribed to offset the dark induced depression.

Many birds, including geese, have migrated south where temperatures are warmer and food more plentiful. “Snowbirds,” domestic migrants on wheels, have already headed for winter escapes. Some from “up north” come to Texas seeking milder winters than places above the Mason-Dixon line.

Praying mantises have glued hardening egg masses on plants and walls, and walking stick bugs have scattered their little eggs rather randomly. But no matter how prayerful their attitudes, winter will take the adult mantises to insect heaven, and the walking sticks will stop walking and simply be inert sticks.

Trees and many shrubs have displayed their fall colors and dropped their leaves, awaiting spring to restart sap flow and bud burst.

Furry animals like coyotes, raccoons, dogs, and cats have put on their winter undercoats of fine, dense, fur insulation. When spring comes they’ll shed the extra fur – the cats and dogs all over your house if they’re indoor pets.

Some animals, including mosquitoes, frogs, and toads, find shelter. Mosquitoes often slip under loose bark for protection, but most of them die. Some insects have a chemical antifreeze in their systems that inhibits freezing. Frogs and toads burrow into mud and sleep away the cold months.

Louisiana black bears, now making inroads into East Texas, have put on weight and will spend some time in a winter lethargy. Not truly hibernation, they sleep a lot, and only come out occasionally in winter.

Cold air from the Arctic regions has made periodic assaults into Texas as outer space tries to draw the warmth away from the earth. The sun finds it more difficult to warm the surface of our planet during fall and winter. Even though it’s actually closer to the earth than in summer, it is at a lower angle, and the glancing rays aren’t as efficient in warming us.

For humans, protection from the cold relies on insulation, either in homes, or by putting on extra layers of clothing. Hunters beware. A human without adequate cold protection can suffer from fatal hypothermia, a lowering of the body’s core temperature below what is necessary to sustain life processes. Hypothermia occurs more quickly during windy weather because the warm layer of air surrounding our skin is blown away. But the most dangerous situation is immersion in cold water. Boaters falling into the water will quickly be in great danger. An immersed person loses heat 48 times faster in water than in still, dry air. In very cold water, survival may become impossible in mere minutes.

Inuits and other far north dwellers have long made shelters called igloos or quinzees to insulate themselves from winter’s blasts. Incidentally, an igloo is made of sawed blocks of snow and a quinzee is a pile of snow hollowed out in the middle. The key to the success of these shelters is the dead air space trapped between snow granules. They are never made of ice blocks.

Hopefully, you will have a pleasant fall and winter. Make a point of going out at night. The brightest, most spectacular stars and constellations are up during this season. So go outside and enjoy the brisk weather. Before you know it, it’ll be blazing hot again.